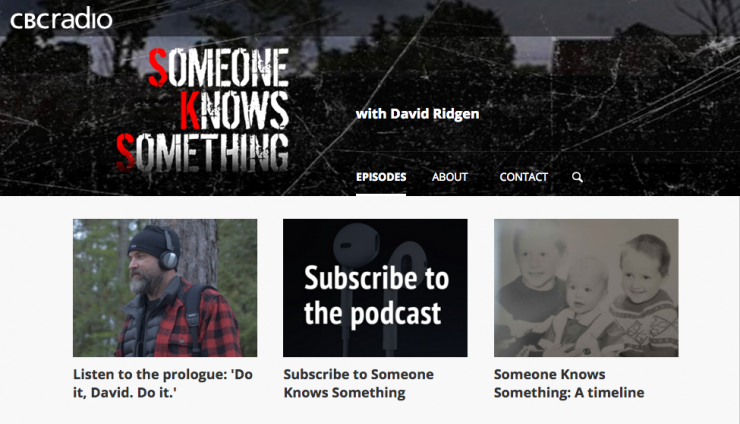 Why podcasts are a part of CBC’s digital future

Crime podcast Someone Knows Something is the latest of three CBC podcasts to debut.

The first day CBC’s true-crime podcast Someone Knows Something premiered on iTunes, it shot to number one on the Canadian podcast charts. It was an exciting start for what was only the CBC’s third solely digital podcast effort, following Campus and Back Story.

Hosted by David Ridgen, the podcast, inspired by the success of American podcast Serial, investigates the disappearance of a five-year-old boy in 1972.

Leslie Merklinger, CBC's director of new programs and talent development, joined the CBC just over a year ago. Amongst her mandates was introducing original podcasts. She spoke to J-Source about the role the format will take in the CBC’s digital strategy. This interview has been edited and condensed for clarity.

J-Source: How did the idea come about that you wanted to tell this story this way?

Leslie Merklinger: The CBC as a whole is working on a digital-first strategy, in terms of all of our content reaching audiences where they are. So, for us on CBC Radio it made sense, especially now more than ever that we really look at creating original podcast series.

Our radio shows have been podcasted and distributed digitally to our audiences for years, but the idea of creating original podcast series that would launch on our digital service was new.

Audiences are seeking fantastic, creative new forms of storytelling through digital audio. I think there's something really engaging for an audience to follow a story along as it unfolds. For all of those reasons, the time was right for us to take a look at the very popular genre of crime as part of the kinds of content that we are exploring through our original podcasts.

J-Source: When you say this is digital first, is the podcast on the radio at all or can you only access it digitally?

LM: Those three series are purely digital programs. We've done one-off specials for each of those series to let our audience on the radio hear what we are doing with podcasting to connect audiences. It makes sense for us to expose our radio audience to the exciting stuff we are creating in podcasts. We may do more of that going forward, but at this point it’s a podcast.

We also created a radio show, the first of its kind, that curates the best podcasts from around the world called Podcast Playlist. It is a weekly show hosted by Matt Galloway and Lindsay Michael and it's on Radio One.

J-Source: Are there new employees, different from the typical radio employees, who are working on these stories?

LM: Most of the podcasts that we are creating, that we get pitched, are from radio producers—people who have seasoned and experienced years and years of doingr radio shows. Some are younger, to be honest, because they are perhaps more plugged into what is happening to digital audio and the podcast space. It certainly appeals to younger listeners.

It might be a little bit of a creative outlet for some producers who worked on slightly more traditional radio shows. It’s an opportunity for them to play a little bit more.

J-Source: How has the reaction been so far to Someone Knows Something?

LM: It’s been nothing short of amazing. We knew we had something really special with Ridge and his particular approach to investigating cold cases.

When we met Ridgen, a half-hour meeting turned into an hour and half where were so enraptured by his approach to investigative journalism. We just knew we had our show and we knew we had not just a host, but a protagonist in our story because he's very personally invested in these investigations.

I have to say that the response has been really quite stunning. I think people are swept up in Ridgen’s storytelling and amazed by his commitment to investigating these cases.

His personal investment is really incredible. In the prologue episode, he talks about being conflicted about when we approached him to do this, whether he wanted to go there or not.

When he was thinking about whether he was going to take us up on our offer to do the series, he went and called every family that he had investigated cold cases for to ask if he made a difference to them, and they all said yes, and they all said, "do it David." So he realized through that, his work was important and it was something that he wanted to do again with us.

LM: We are already working on season two on Someone Knows Something. We don't know when that will launch because so much of our storytelling for this series is based on how the investigation unfolds.

We have another new podcast coming this spring. I can't tell you to much about yet because we haven't announced it.

It’s an opportunity to develop new kinds of storytelling that could inform our radio programming. It’s sort of a really great place for development of new voices, new perspectives, diversity and new storytelling techniques. It can also be seen as a bit of a farm team or development arena for new talent as well—new on-air personalities as well as new formats.

The podcast space is something we are committed to, but it is also serving us really well as a place of development and play. It’s really exciting.