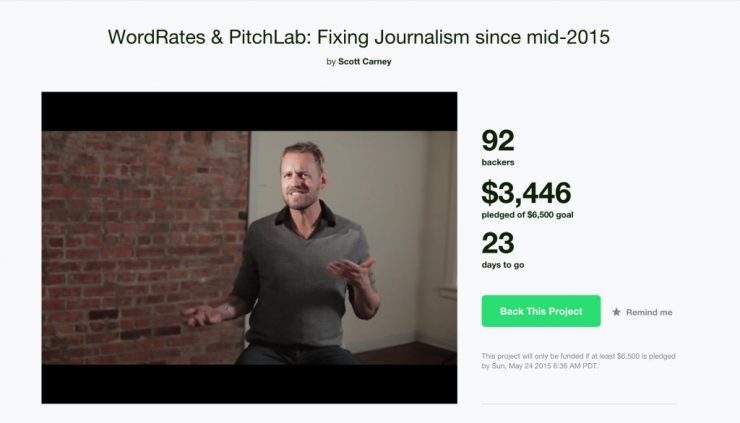 Scott Carney figures he’s beaten the odds and come out the other side: he’s become a successful freelance writer. What was his first clue? Everyone kept asking for his advice.

“I get emails and phone calls and letters from writers around the country all the time asking for advice on how to negotiate contracts or how to get a better deal,” the Colorado-based writer told Story Board during a phone call earlier this week.

Carney has written for some of the top American magazines and has sold three books (his second, A Death on Diamond Mountain, was published last month). And it’s from this position of career success that he’s decided to try and shake things up for freelance writers in the magazine world.

Last Friday, Carney launched a Kickstarter campaign for a two-pronged website project called WordRates & PitchLab, which aims to improve working conditions and rates for freelance writers. The Kickstarter’s subtitle is “Fixing Journalism since mid-2015.” It’s an ambitious goal, but this is a project that Carney has been mulling over for years—ever since he started noticing that reprint rights and copyrights were being cut from writers’ contracts.

“I noticed that certain rights that were standard in the boilerplates that were being taken away from my Wired contract and various Condé Nast contracts were actually incredibly valuable,” Carney told Story Board during a phone interview earlier this week.

For instance, he says, a story he sold to Wired for around $5000 a few years ago earned him $20,000 on the international magazine market once he’d managed to reclaim his reprint rights.

“And that sort of opened my eyes. It’s very easy to get taken advantage of when you’re a writer because you don’t know what the market really looks like,” he says.

Now that Carney has moved into book publishing and is less dependent on magazines for his income, he aims to open the eyes of other freelance writers, too. His WordRates website will publish ratings of magazines and editors submitted by users (anonymously, if they wish), allowing freelancers to compare contracts and rates and this choose the best place to direct their pitches. Since the magazine market is global, Carney says, he plans to include information about magazines worldwide.

The second aspect of the project, PitchLab, aims to put upward pressure on magazine writing rates by offering high-quality, highly desirable stories to a variety of magazines and asking for bids. This side of the project was inspired by Carney’s entry into the world of book publishing.

“I’ve sold three books at this point and to see auctions happen in the book industry is, from a creative professional’s viewpoint, just amazing,” he says.

Seeing an agent take a book to a dozen or more publishers looking for the best offer made him wonder whether a similar system could work in the magazine world.

“You’ll do rounds of bidding until you get the best possible offer, whether it’s in terms of rights or royalties or just flat-out money payment. And I don’t see why that can’t happen in the magazine publishing industry, especially when you look at the outrageous profits that some of these magazines make,” he says.

Carney has previously posted on his website that he believes $20 per word is a fair rate for top magazines to pay their writers. With the revenue that major magazines bring in, he says, such word rates should be no problem.

“One ad sells for $180,000 sometimes. Their entire writing budget for the issue is usually less than that,” he says.

“I’m of a firm belief that writers are worth 10 per cent of a magazine’s book value at least. What [magazines] earn in revenue, [writers] should be getting at least 10 per cent. And magazines currently pay about 1%. And that’s ridiculous.”

Although the magazine ratings system will be publicly available, the PitchLab side of the site will be open only to subscribers. Members will be able to submit their ideas for consideration by a number of mentors. Accepted pitches will be workshopped with a mentor and then shopped to several publications at once and sold to the highest bidder, earning the mentor and PitchLab a commission on the sale.

Carney intends to participate actively on the mentorship side of the project and has several other top freelance writers—none of whom he will name yet—on board, as well.

Magazines may be taking notice of Carney’s campaign. He says his previous writing rates project, a Google Doc filled with word rates for various publications across the country, was sabotaged three times during the short period it was online. And Carney tweeted earlier this week that he’s seen hits coming to his website from various arms of the Condé Nast publishing giant. But he isn’t surprised that magazine publishers would take an interest.

In the week that Carney’s Kickstarter has been running, he has reached over half of his goal funding amount of $6500. At the time this post was published, it had reached nearly $3500.

Carney says the money will go towards website development and legal costs, if they arise.

“And if I really do change the way pitches happen, the site should make some money two or three years down the line. But the real goal was just to raise awareness that writers can fight for this stuff,” he says.

He cautions writers that not every pitch that gets submitted will find a mentor.

“It’s going to be a selective process,” he says.

“In order to move the needle from the magazine side of things we really need to be representing the best possible content. And it’s got to be stuff that they want so badly that they’re willing to give concessions for it.”

“Even if people don’t use the PitchLab, I really hope just the rating section takes off and has a really active community of people,” he says.

“Just comparing rates and contract terms between publications will give writers the power to take control of their financial future instead of just being subject to whatever the whims are of the particular publication they’re working with. And I hope there’s a cultural shift because of this.”

To find out more about WordRates & PitchLab, or to contribute to the project yourself, visit Carney’s Kickstarter page. And if you’re interested in seeing this happen, Carney says, make sure you share it with your network.

“Campaigns like these live and die by their social media following, so if people want to see this actually happen, I’d definitely ask people to share the campaign on Facebook and Twitter and get the word out.  Doing that seriously adds value to whatever contribution they make.”

This article originally appeared on The StoryBoard, and is reprinted here with permission.