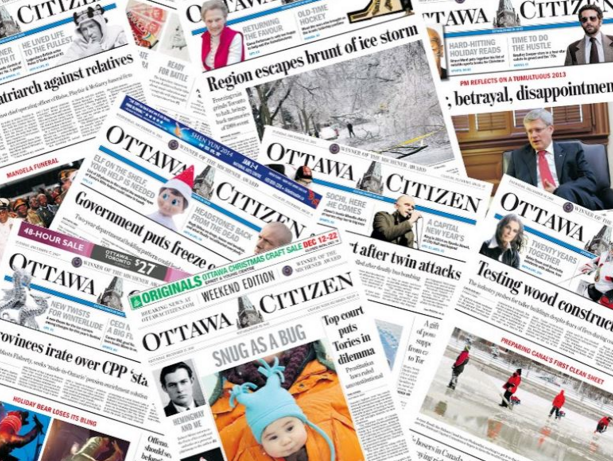 Postmedia not naming those who took the buy-out, but Twitter announcements have rolled in.

Twelve people have taken buy-outs at the Ottawa Citizen, a Postmedia spokesperson confirmed.

Georgia Sourtzis, a communications manager at Postmedia, said she cannot name who in the newsroom has taken a buy-out.

A list circulated on Twitter had 15 names, including editor Andrew Potter, who actually announced his departure on Jan. 12, a week before Postmedia announced its voluntary buy-out program. Potter left the Citizen to take a job at McGill University.

Sourtizis could only confirm 12 buyouts. A source told J-Source that all the departures were by choice.

Among those who have announced or confirmed they are leaving are a senior editor, a top national affairs reporter and the homes editor.

Drew Gragg, deputy editor, confirmed to J-Source that he was leaving but did not confirm if he was taking a buy-out.

Sad to be leaving @OttawaCitizen on Feb. 19. Thanks to readers, advertisers, editors and colleagues for a wonderful 18+ years.

Some personal news: After more than 27 years at the Citizen, 5 in Homes & Condos, the time has come for me to take on a new challenge. 1/4

Anita Murray, homes editor, told J-Source she was leaving the Citizen of her own accord. Glen McGregor, national affairs reporter, said his departure was voluntary and amicable.

The buy-outs were announced in the wake of cuts at Postmedia last month that saw 90 people lose their jobs. Sourtzis said buy-outs have not yet been offered at the Province, in Vancouver, and no voluntary buy-outs were offered in Alberta.

In 2014, there were seven buy-outs at the Citizen.

Those remaining in the now merged Citizen–Ottawa Sun newsroom were quick to point out that reporters are still there, reporting on Ottawa’s news.

Hey look, I’m at the @OttawaCitizen and the lights are Still. Fucking. On. Just try to turn them off. pic.twitter.com/81o7Ulau1l