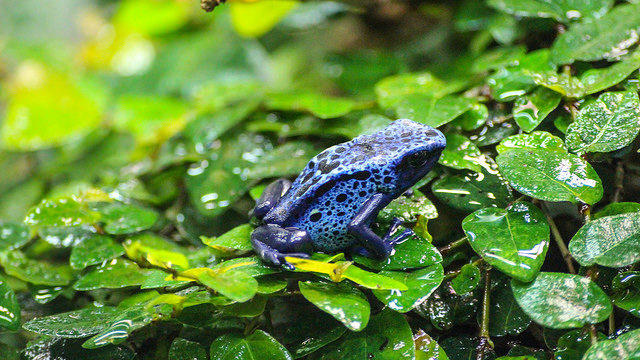 Adventure, conservation and the future of Suriname culture in “Somewhere up a Jungle River”

This 2007 piece from explore uses one symbol—a endangered blue frog—to tell the story of a jungle ecosystem and Aboriginal culture at a crossroads between the past and an uncertain future.

Imagine a secret wilderness where distance is measured in sunsets, translucent bamboo shines like insect wings and the moon sits high above a canopy of ancient trees. This is a real place turned into a true story called “Somewhere Up a Jungle River.” An uninhibited jungle in Suriname, the “least travelled country in South America,” seems within reach as author Andrew Westoll journeys here along the Sipaliwini River. More than a body of water, the river reflects the forward rhythm of his narrative—a search for a blue iridescent frog called the okopipi, an endangered, obscure species Westoll believes to be the “quintessential soul” of Suriname and exclusive to the grasslands of Mamia.

Time seems to move slower in this part of the world, and yet time plays a relevant role in this story. It “moves in strange circles” for Westoll, who tells us he once studied monkeys at a local research centre and now finds himself hunting them with a small group of Trio Indians. It’s necessary for the reader to move back in time, through Westoll’s background history of the Trio, to learn how the Trio were lured from the far corners of the Suriname wilderness by American missionaries who promised education and healthcare.

The rare frog, in a sense, symbolizes this past that will never be again—the old ways of the Trio, a culture lost to amalgamating in one place. And yet the frog, banned from the exotic animal market, also represents the future—what should be preserved and protected.

Westoll’s language also moves languidly between past and future. His voice is reflective, yet all along he wants the reader with him in the present. We can hear the crackling of his campfire, the ripping of bark in the darkness and the last breath of a dying howler monkey that falls near his feet. We trust Westoll will want us close by when he finally finds the okopipi, so the suspense that pulls us the reader forward is welcome.

Westoll structures his background information to seamlessly slip between scenes. When he falls asleep at camp, listening to the sounds of the Trio’s dying language, he shifts into the background information on the Trio—almost as if their life was a dream that once was. This history slowly dissolves into Westoll’s description of the language again, until we see him awake, rolling up his hammock at 4:30 a.m.

After the group reaches civilization, and before they head into the “last Eden” where the rare frog lives, we’re given background information on the current state of the Surinamese. Their government refuses to give the Trio legal title to their lands because of its fixation on the possible wealth of gold and bauxite in the southern savannahs. Although the Trio are scoping for ecotourism projects in the region to suggest alternate prospects, such as sustainable tourism, Westoll tells us the future is unsure. “But no one knows whether these projects will be enough to protect the Trio and the other residents of the jungle,” he says, “the birds, the monkeys and the tiny blue frogs.” With this knowledge of potential extinction, Westoll’s quest to glimpse the rare species proves more urgent.

But it also relates to similar issues affecting Canada. We don’t have to travel to South America to witness Aboriginal communities protesting logging companies that threaten their lands and endangered wildlife. Environmental organizations, such as the International Boreal Conservation Science Panel, fight for permanent protection of Canada’s boreal forest, a region that contains more surface freshwater than any other nation and is among the world’s last remaining northern ecosystems that support animals extinct in other regions.

The journey to find an okopipi frog is a relatively straight trajectory built of extended scenes of the jungle and grasslands, with subtle twists and turns along the way. A collapsed mango tree blocks the river’s path, for instance, and Westoll’s trek upriver through rapids is arduous. He also encounters a small civilization where the old ways of the Trio still exist—green words riddled on a man’s body, a young girl who can casually slice an iguana.

By the time we see the azure blue frog and feel the lightness of its bodyweight, we’ve travelled the land as an ordinary person. However, our everyday existence has grown exotic through Westoll, who sees himself as a stranger in a strange world and attempts to understand what is foreign by sifting it through his personal feelings. He writes, “In seconds, the monkey is leaping through the canopy. The men continue to grunt as they track the animal. Suddenly, I see more flashes of red escaping to the west—two juvenile females, one juvenile male, an adult female with a baby on her back. I almost yell to the others but stop myself. Instead, I watch the monkeys recede into the green, winning their freedom and leaving their doomed patriarch behind.”

There’s a sense of relief during the last scene, when he cannot find the photograph where he’s holding the frog. He has shown us a place we hope no one ever destroys, and, as a result, it’s easy to let the amphibian remain a “metaphor,” as he calls it—a symbol of a “last Eden”—unknown to man.