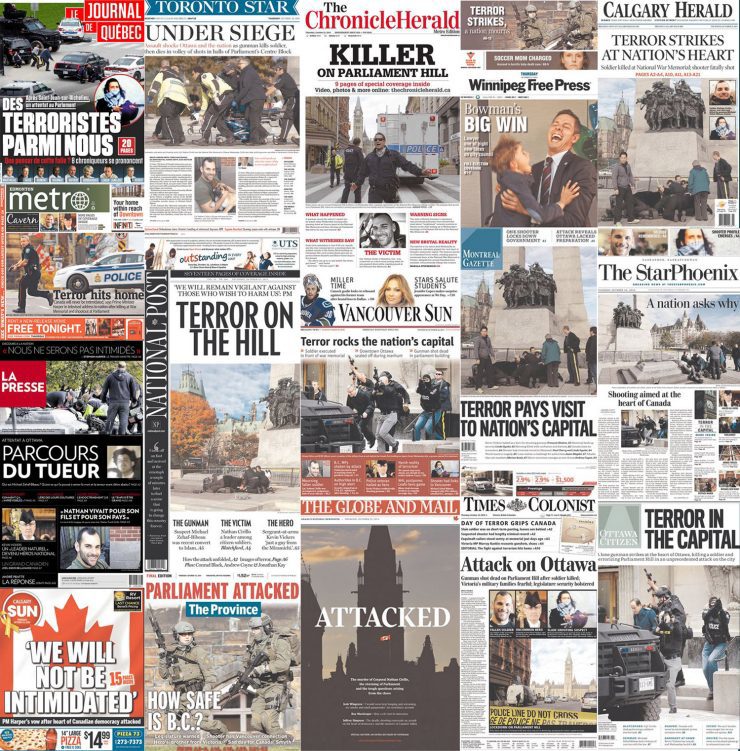 Around the World: Countries respond to attack in Ottawa

By Jake English, for the International Reporting Bureau at Humber College

The shooting in Ottawa caused a ripple effect in coverage drawing much reaction from around the globe.

Most of the Canadian newspapers chose to lead with the attack in Ottawa, with the exception of the Winnipeg Free Press, which went with the election of Brian Bowman as the new mayor of the city.

In a CBC online report, U.S. President Barack Obama called the attack “tragic.” The report detailed steps Obama took after learning about the shooting in Ottawa. John Boehner, Speaker of the House of Representatives, also offered his condolences in the piece. U.S. Secretary of State John Kerry reached out to his Canadian counter-part, Foreign Affairs Minister John Baird, to offer support.

The report also detailed the reaction from British Prime Minister David Cameron, who said on Twitter he was “appalled” by the attacks in the Canadian capital.

A Toronto Star online report looked at the reaction from ISIS. Two significant quotes grabbed from social media gloated over the attack.  One read “Canada getting a taste of their own medicine?” and the other read “Canada starting to pay the price of intervention.” A Canadian researcher studying home-grown ISIS recruits was contacted by the newspaper to background the phenomenon.  Canada’s recent decision to contribute air support and military advice to help fight ISIS was suggested in the Star article to be the trigger for the attack.

The Globe and Mail also turned to President Obama for reaction in a piece titled “President Obama called Harper within hours of attack.” The report by Paul Koring in Washington said Obama was careful in his words, neither calling yesterday’s attack an act of terrorism nor suggesting links to a “larger campaign.” Koring also reported the FBI had field officers ready to assist Canada.

A similar report online for CTV News detailed President Obama’s call for solidarity between the two nations. The report also explained how the Department of Homeland Security was continuing to monitor the situation in Ottawa while taking precautions at home.

With a file from Tamara Baluja