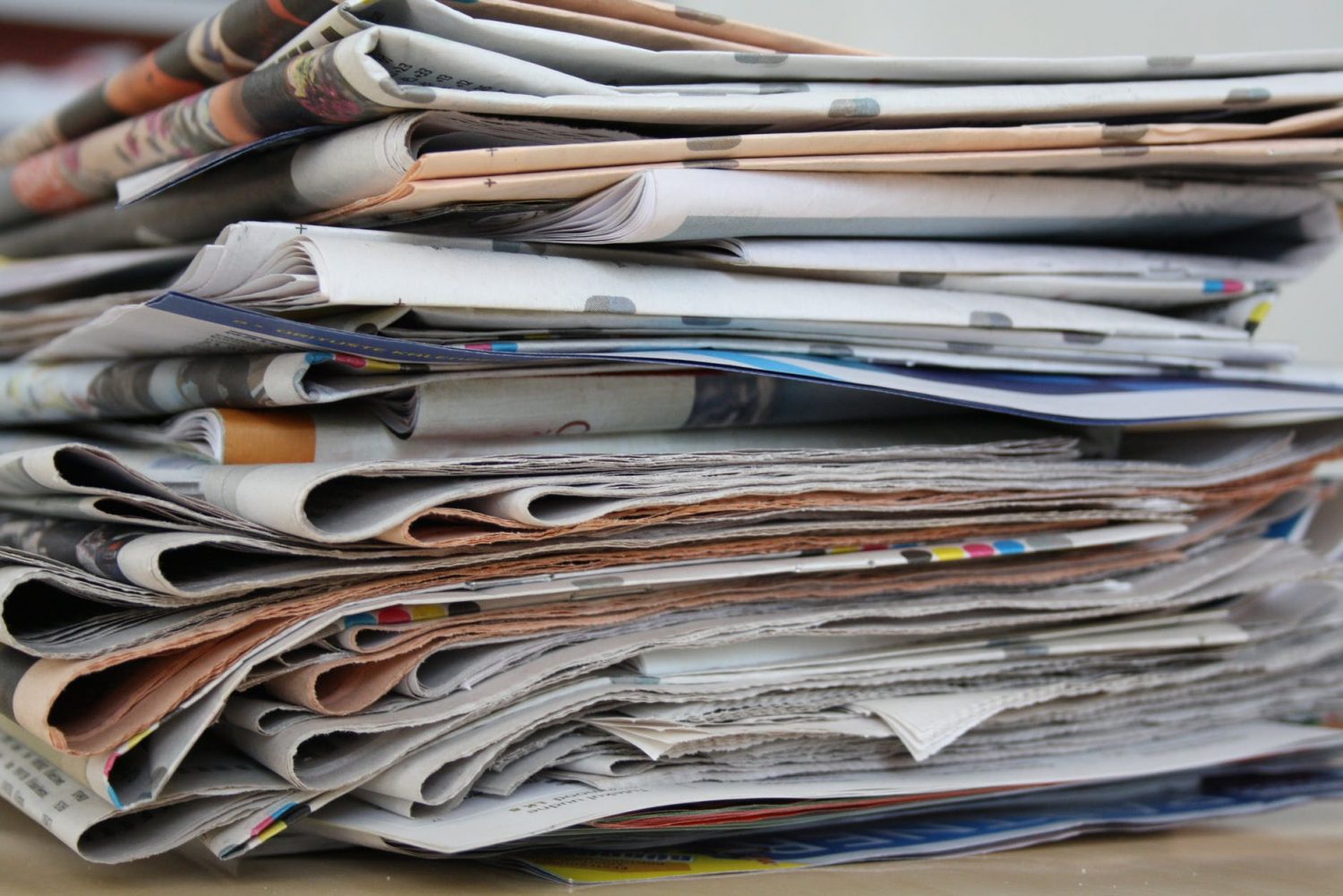 Survey of small-market papers finds workers anxious about ad revenue, stressed about digital competition but still have their readers’ trust

Despite the common refrain that local newspapers are on the verge of extinction, a new report has found that small-market newspapers are engaged with their local communities and many older journalists remain optimistic about the state of their business.

“Good News, Bad News: A snapshot of conditions at small-market newspapers in Canada,” a report published by the Ryerson School of Journalism’s Local News Research Project and the National NewsMedia Council, found that industry workers are caught in a tug-of-war between what they believe to be vibrant and successful newsrooms and the “perception that their industry is on its deathbed.”

“The biggest challenge is showing people that we have a future. People hear messages about how the newspaper industry is in big trouble, and it filters down,” one respondent said. “Advertisers hear this message and they’re less willing to advertise. Students coming out of journalism schools hear about papers that are closing. They don’t hear about the opportunities that exist with weekly and small-city newspapers. And people don’t see how many community newspapers are diversifying, through their websites and through podcasts.”

The report is modelled on a Tow Center for Digital Journalism study by University of Oregon Carolyn S. Chambers, professor in journalism Damian Radcliffe and University of Virginia assistant professor Christopher Ali. Their 2016 survey of small-market newsrooms found that U.S. journalists were facing shrinking newsrooms, lack of job security and increased workloads, but reported a high degree of optimism and an understanding that the work they do is not replicated by bigger news outlets.

“These results paint a picture of what’s happening in small-market newsrooms at a time of major disruption,” said the LNRP’s lead investigator April Lindgren in a press release. “Smaller newspapers face major challenges but the survey also reveals that publications know they are making a unique contribution to communities by focusing on local stories that nobody else is telling.”

Conducted between Feb. 5 and April 25, 2018, the online survey received 127 eligible anonymous responses from local print newspapers that have a daily or weekly circulation of below 50,000, with 81 per cent of respondents being from newsrooms that have five or fewer editorial employees. Ninety-three per cent of respondents were from Ontario, British Columbia, Alberta and Saskatchewan, and there were no responses from journalists working in Quebec.

A number of respondents stated that constant waves of layoffs are increasing individual workloads, and therefore decreasing the quality of the content produced by the publication. Thirty-seven per cent stated that they are producing more stories than they were two years ago, and almost 40 per cent said they consistently work more than 50 hours a week.

The report also stated that local news outlets help foster a sense of community and encourage civic engagement, but they are potentially involved in the “negative stereotyping of neighbourhoods,” as often, their coverage underrepresents and misrepresents racialized communities.

Only three per cent of respondents identified as members of “visible minority groups.”

The report cited a good deal of trust in local papers as one of their biggest assets, pointing to a constructive feedback loop, where small-market papers are able to engage directly with their communities, enabling them to offer the types of local reporting that fosters and sustains audience trust.

These relationships, believe respondents, give local papers an edge when competing for ad dollars and readers. According to a 2018 study by Vividata that looked into trust in local news, Canadians are twice as likely to trust printed local papers over a digital-only outlet, with 66 per cent saying these outlets are among their most trusted sources of news.

“Editorial standards and ethics act as the foundations for good journalism – and good journalism is an essential piece of a community’s civic architecture,” said Jolly. “This study demonstrates that, on a whole, community newspapers are doing good work in building trust with their readers.”

Seventy per cent of respondents stated that out of all outlets, they trust the print edition of national daily newspapers the most.

Meanwhile, local outlets are under constant pressure to compete with their bigger, faster national counterparts, as there’s a sense that readers have multiple sources for information online as it is.

“The decision (is) whether to be ‘first’ with the news, given this digital age and the speed of social media and online publishing,” said one respondent, “or to hold back and do a better job of reporting the story before posting or printing the article.”

While it’s small-market print papers that enjoy the highest levels of confidence from their audiences, respondents at larger papers reported higher degrees of comfort with media ethics. 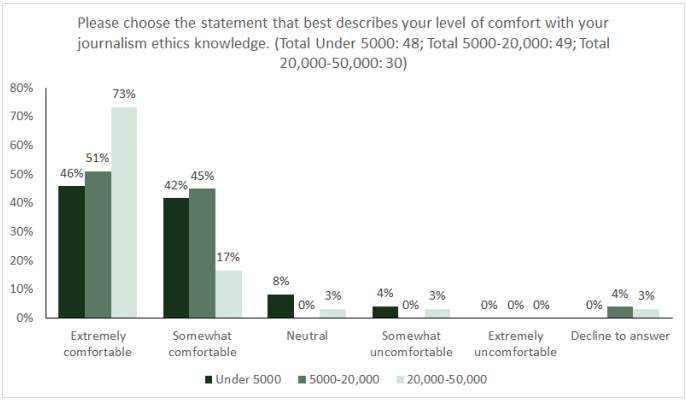 Canadians slower to take up new multimedia methods than their U.S. colleagues and are generally less optimistic

Americans were almost two times more likely than Canadians to include video reporting, live video and podcasts on their websites, noted the report in a comparison with the U.S. results.

Out of the Canadian respondents, 47 per cent stated they did not use any “emerging technology” that was listed in the survey, which included podcasts, virtual and augmented reality, chat apps, as well as live video reporting through sites like Facebook and Periscope. However, the report noted that part of this hesitation towards engaging with more multimedia has to do with the fact that most videos are viewed on social media platforms like YouTube and Facebook, which would take viewers away from their organization’s platform.

Contrary to the common view that local newspapers typically stick to old-fashioned methods, the report found there was a general willingness among reporters to embrace new digital tools. Three-quarters of respondents said that compared to two years ago, they are investing more time on digital outputs, with 54 per cent saying they split their time between working on print and digital.

It also found that three-quarters of journalists at small-market newspapers consistently use their company’s Facebook accounts to post their content, and more than half stated they use Twitter. Three-quarters said they use audience engagement metrics to keep track of their readership numbers.

“There are those who embrace (change) and adapt and those that refuse,” said one respondent in the study. “And that has a significant effect on morale in a newsroom when you have those who are keen to engage being crushed by the sticks-in-the-mud that hate social media/digital.”

However, becoming more digitally focused has its drawbacks as media giants like Facebook and Google continue to take a big chunk of ad revenue, and many newsrooms — local and national — are struggling to find ways to reduce the significant financial losses.

Despite years of declining ad revenue, the majority of the surveyed news organizations continue to rely heavily on advertising as their main business model, and as social media continues to grow and bypass traditional media outlets, the report said there is an increased need for diversifying revenue sources.

These companies “have swallowed the web and are not subject to the same taxes, cost structure and legal obligations of real news generators,” said a respondent.

The importance of local news

Often the only publications covering news in small communities, small-market newspapers emphasize the importance of maintaining a local focus.

“Newspapers have been — and continue to be — significant contributors to vibrant, well-functioning local democracies,” reads the report. “They play a role in fulfilling what researchers have identified as the critical information needs of communities, including the need for timely reliable information about risks and emergencies, health, education, transportation, economic opportunities, the environment and civic and political issues.”

Local newspapers are instrumental when it comes to breaking important stories that would otherwise go unnoticed. In 2012, for example, the London Free Press in London, Ont., broke a story about then-mayor Joe Fontana, who had used federal funds to pay for his son’s wedding reception in 2005. The story led to an RCMP investigation and the eventual conviction and resignation of Fontana.

As the report notes, studies have linked a vibrant local news ecosystem with healthier functioning democracies and higher rates of civic engagement.

Forty-three per cent of respondents stated their publication has started an editorial campaign surrounding an important issue in their community, and the vast majority said their local newspaper is viewed as a trusted source of information. Nevertheless, despite increased community engagement, 57 per cent of those polled said their newsrooms have shrunk since 2016.

Lack of investment in employee training

Most respondents said they have to learn about industry-related technological advances on their own, noting a lack of investment in technology training for staff. Only 20 per cent said their companies pay for training sessions. The report said the lack of training  likely has an influence on why many respondents demonstrated a lack of interest in new technology.

The same goes for journalistic ethics training — only 32 per cent of those polled stated they get employer-sponsored resource guides or ethics courses, while the rest said they learn about journalistic ethics and best practises from other reporters or online sources.

As part of the report’s recommendations to local news outlets, it stated that newsrooms should be looking for ways to diversify their revenue, by hosting events like panels or round-table discussions, as well as using crowdfunding sites.

Other recommendations mentioned in the study revolved around fostering stronger relationships with other journalists, including journalism schools, and investing in collaboration with other newsrooms. The report recommended that small-market newspapers begin to introduce free email newsletters to both attract new readers and increase engagement with local readers. Adhering to a public code of journalistic ethics is also recommended, as it helps build trust from the community.