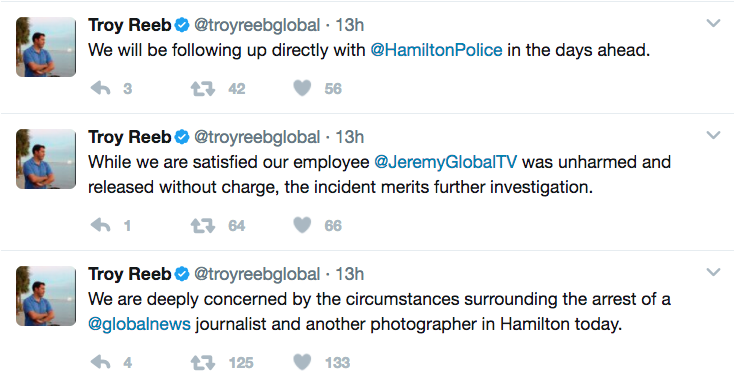 Details are still emerging about the arrest of two journalists at a collision scene in a Hamilton community on the evening of May 16.

According to the Hamilton Spectator, freelance reporter David Ritchie was arrested and charged with obstructing police. Global News cameraman and editor Jeremy Cohn was arrested and released.

Both were reporting on the scene of the death of a 10-year-old girl in Hamilton, who was reportedly hit by a car.

Other media at the scene caught images of the arrests as they happened.

And things are getting tense here. @Media371 and this Global photographer both arrested by @HamiltonPolice. #HamOnt pic.twitter.com/uBqrK3H00m

Global photographer & @Media371 both arrested by @HamiltonPolice on scene just for doing their jobs. #HamOnt pic.twitter.com/9pE2Y7mShY

Troy Reeb, senior vice president of news, radio and station operations at Corus Entertainment, said on Twitter that last night that while their journalist was released, the incident “merits further investigation.”

We are deeply concerned by the circumstances surrounding the arrest of a @globalnews journalist and another photographer in Hamilton today.

While we are satisfied our employee @JeremyGlobalTV was unharmed and released without charge, the incident merits further investigation.

Ritchie tweeted that he would be “seeking resolution.”

Thanks for the support, I have great relationships with many first responders. This was an isolated issue and I will be seeking resolution.

Canadian Journalists for Free Expression issued a statement on May 17, 2017 calling on Hamilton Police Service to dismiss the charges against Ritchie and hold a public inquiry into “the circumstances which lead to the forceful detention and arrest of members of the media.”

Update, May 18, 2017: The Hamilton Spectator reports that Hamilton police chief Eric Girt will reviewing the arrests.

We will continue to update this story as more information becomes available.