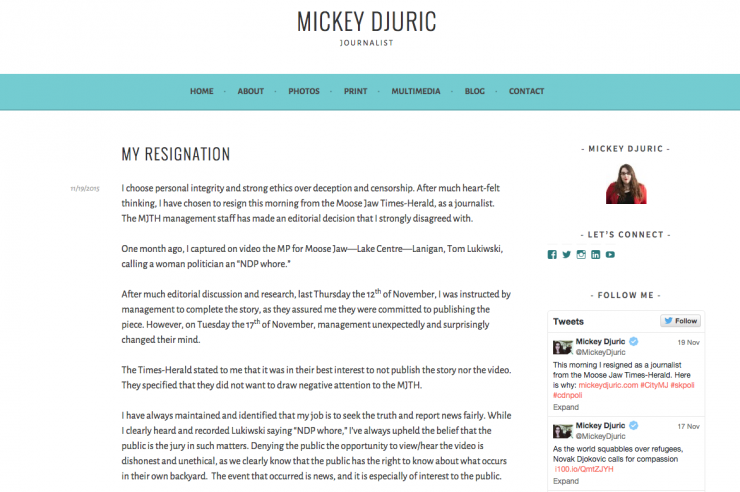 Why did a Moose Jaw Times-Herald reporter resign over a video?

Mickey Djuric said she heard a Conservative MP call a woman running provincially for the NDP a whore—but her editors at the Moose Jaw Times-Herald decided not to run a video that would let the public decide for themselves, prompting Djuric to announce her resignation publicly on Nov. 19.

What happened on October 19?

A reporter at the Times-Herald, Djuric was covering election night on Oct. 19 from Eagles Club, in Moose Jaw, where Conservative Tom Lukiwski gave his victory speech, according to the CBC. Juggling live-tweeting, recording audio and shooting a video of his speech, she did a double-take when she heard what she said sounded like the word “whore” come out of Lukiwski’s mouth.

“When he said that remark I kind of second-guessed myself when he had said it, because it shocked me,” she said. “But I was multitasking, I was tweeting. It was not like my full attention was on his speech and every word that was coming out.” Djuric also knew that Lukiwski was caught on camera making a derogatory comment before, and she found it hard to believe he would make the same mistake twice.

Lukiwski was talking about an upcoming provincial election and his hope that Saskatchewan Party MLA Greg Lawrence would be elected. One of Lawrence’s competitors is NDP candidate Karen Purdy. The alleged comment can be heard at about 1:41 in the video below:

Lukwiski told the CBC that he denies using the word whore. He said he used horde and frequently uses the phrase “NDP horde.” Conservative interim leader Rona Ambrose posted a statement online that said she accepts his explanation.

Purdy, who also spoke to the Leader-Post, and said she was “aghast” at Lukwiski’s comment.

Why are we just finding out the video exists now?

When Djuric returned to the newsroom, she filed her election night story. Then, she went on vacation for about two weeks. It was when she arrived back in the newsroom that she notified her editors about she had shot the video of his speech.

Craig Slater, managing editor of the Times-Herald, told J-Source he first heard of the video the week of Nov. 9. Slater notified Thane Burnett, Transcontinental’s content director of Saskatchewan and the Atlantic region on Nov 12. Burnett told J-Source he was actually in the Times-Herald newsroom that day and spoke with Djuric, giving her the go-ahead to work on the story.

“I told her it was a story that we should follow,” Burnett said.

Lukwiski initially denied the allegation, according to Djuric, during a phone call with her. He called her back the same day and said that after speaking with his staff, they all agreed that what he had said was “hordes.”

Why did the editors decide to pull the story?

Burnett said they decided not to publish the story on Nov. 17. “What changed was the word he said he used,” he said, adding that when he first listened to the audio, he only heard one word. But after hearing Lukwiski’s explanation, he couldn’t tell if it was one word or another.

“After seeing the video literally dozens of times—the reporters in the newsroom have seen it too—and after listening to what Tom said in the story, there was the slightest, ‘Well, maybe that’s what he did say, and maybe we’re hearing it all wrong,” Slater said. Not being 100 per cent sure, they were not comfortable publishing the story.

Slater noted that when Lukwiski makes the comment in the video, there was no reaction from other people or media outlets that were there. There were also no complaints that came forward since the night of his speech.

He said they felt it would not have been a responsible approach to run the story when they themselves were not 100 per cent sure of what Lukwiski said.

Slater said that personally, he thought he heard Lukwiski say “the word that starts with W.”

“But my opinion really doesn’t matter when it comes to being a responsible journalist and making that kind of a decision.” He said they are confident in the decision that they made. Burnett added that he was very proud of the vetting process the story went through.

Djuric continued to fight to publish the video. “The public deserves the right to see this video and they have a right to form their own opinion on what he said.”

She also continues to believe that Lukwiski said “whore,” not “hordes” or “horde.” “I know what I heard,” she said.

So why did she resign?

As soon as the final decision was made not to run the story, Djuric said she decided to resign. She offered her resignation letter to Slater on Nov. 19.

“In that moment I knew I could no longer work there because their ethics did not align with mine,” she said.

“I didn’t want to withhold information from the public,” she added.

She hadn’t initially planned to post the video on her own website. But Djuric wanted to be clear about the reasons she left the Times-Herald. So she posted the video, along with a brief explanation for her resignation, on Nov. 19 on her personal website.

The reaction since has shocked her. “I didn’t expect me to become the story.”