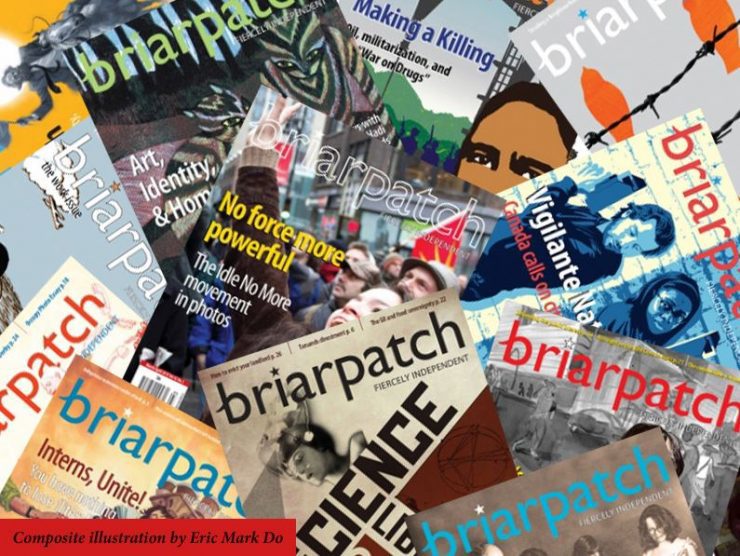 The magazine’s legal action follows a review by the Saskatchewan information commissioner, which ruled the Northern Village of Pinehouse inadequately responded to the two FOIs Briarpatch filed more than 250 days ago.

Three Regina-based writers have filed a statement of claim against Northern Village of Pinehouse, a Saskatchewan community of fewer than 1,000 people, and its mayor who they say have refused to release documents requested under the access-to-information act, despite the urgings of the Saskatchewan Information and Privacy Commissioner.

The claim comes 10 months after former Briarpatch editor Valerie Zink filed two FOI requests that the village failed to respond to by the deadline set out under section seven of the Local Authority Protection of Privacy Act.

Zink filed the initial FOI requests in hopes of receiving the documents in time to publish an investigative story that writer D’Arcy Hande was working on.

Zink and Hande were joined by current Briarpatch publisher and editor, Andrew Loewen, in filing the claim against Mayor Mike Natomagan on Jan. 27.

The piece was ultimately published in the November-December issue of the magazine, without the information sought through FOI requests. It discussed a controversial agreement between the Northern Village of Pinehouse, a small village 550 km north of Saskatoon, Pinehouse Business North (a subsidiary corporation of the village), Kineepik Metis Local #9 and uranium giants Cameco Corporation and Areva Resources for mining contracts valued at approximately $200 million.

“I think my article raises more questions than answers,” Hande told J-Source. “I think it just opens up the book and says there are a whole number of issues here that are troubling and we need to get to the bottom of them. But we need further information, and that’s why these freedom of information requests are important to understanding what has gone on behind the scenes.”

On Jan. 29, Briarpatch received a fax from the village, saying that it would try to comply by the end of February, Loewen told J-Source.

Legally, the statement of defense must be filed by the named defendant—Mayor Mike Natomagan—20 days after being served. Natomagan is also the president of the Pinehouse subsidiary. Natomagan could not be reached for comment by the time of the publication of this J-Source article.

Based on recommendations from a review by the Saskatchewan Information and Privacy Commissioner Gary Dickson, the plaintiffs are seeking the release of all documents requested, a fine of $1,000, the cost of their application and any further relief the court deems appropriate.

The initial FOI request was for the financial statements for PBN, the company’s articles of incorporation, which stipulate the distribution of year-end surpluses or losses to the Northern Village of Pinehouse and any other parties, and copies of correspondence pertaining to payments from Cameco and Areva to PBN or the village.

“We certainly will put that information to use when it comes to light,” said Loewen.

Zink’s initial response from the village was 21 days past the regulation 30-day timeframe. The response she received included a referral to a third-party website and directed Zink to the village website to find some of the records sought. However, Zink claims that the information she required could not be found on these sites. None of the allegations have been proven in court.

Information commissioner Dickson recommended the minister of justice and attorney general consider prosecution of the mayor, up to three months in prison, pursuant to section 56 (3) of the LA FOIP act, in his review of Zink’s complaint

In the absence of provincial action—the province could prosecute and enforce that the village get proper training in handling access-to-information requests, the three writers say they are pursuing this story in the public interest.

“We really can’t do the journalistic work we want to do without access to that information, and the reason we’re intent on this is because the community of Pinehouse deserves accountability and transparency,” Loewen said.

“Briarpatch has a mandate and a legacy going back to the late seventies in investigating uranium development and its impact on communities, its impact on governments and its impact on democracy. So this is nothing new for Briarpatch this is something that the magazine has been committed to since its founding,” said Loewen.

Rachel Aiello is a freelancer and fourth-year journalism student in the joint University of Ottawa and Algonquin College program. Recently, her interest in Canadian investigative journalism has inspired her to begin a blog on the topic. Aiello's most recent work has appeared in Postmedia Network newspapers, Briarpatch Magazine, and Glue, an Ottawa student magazine.

Correction: An earlier version of this article incorrectly identified the subsidiary corporation of the village as Pinehouse Village. The subsidiary is called Pinehouse Business North (PBN).