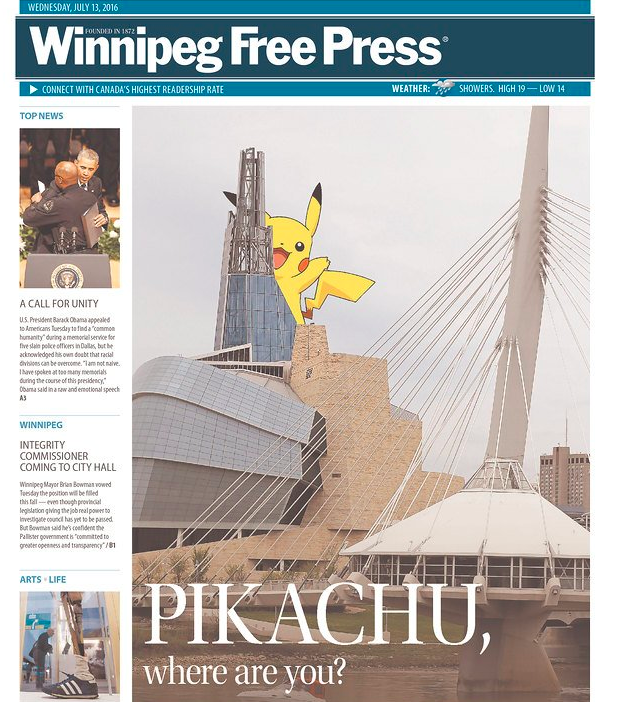 Since the game had its unofficial debut in Canada, Canadian media have been publishing multiple stories a day on the new gaming craze.

Since Canadian smartphone users have been able to get their hands on it, there has been an insatiable appetite for Pokemon Go, an augmented reality game that allows users to catch Pokemon. And Canadian media has been there to document it, every step of the way.

A quick primer, in case you haven’t yet played the game or read one of many, many explainers about it: the object of Pokemon Go, released on July 6 in the United States and on July 17 in Canada, is to catch Pokemon, level them up and pit them against each other in gym battles, each controlled by one of three teams which players have the option to join once they hit level 5 in the game: Instinct, Valor and Mystic.

We wanted to find out how much time Canadian media has devoted to covering the game. J-Source looked at six of Canada’s largest media outlets and counted how many Pokemon Go stories they have posted on their websites. In short—they have posted a lot. During the month of July the six media outlets we looked at had posted at least over 30 pieces of Pokemon Go content, some of it quite similar. 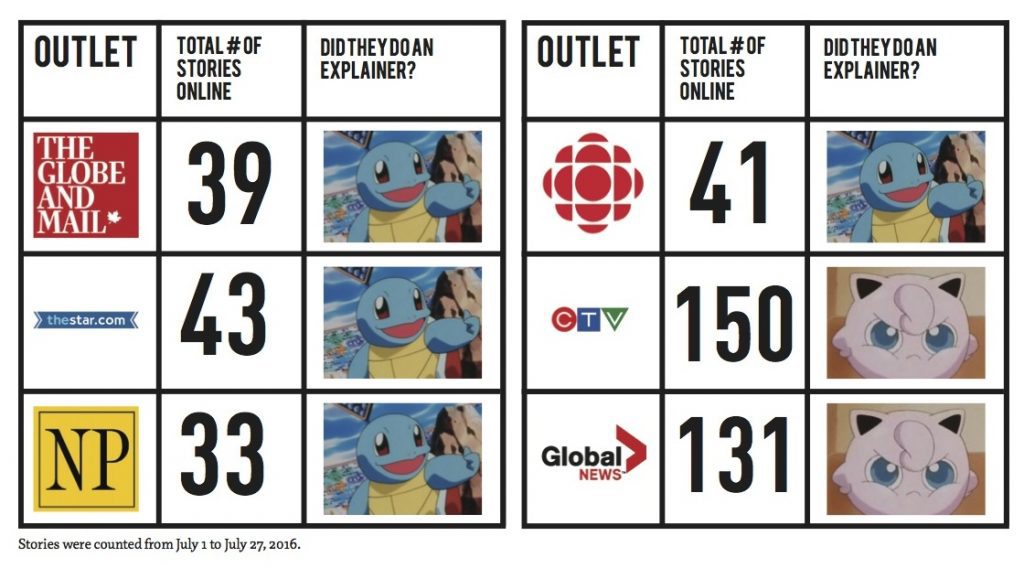 Those numbers do come with a caveat. A good chunk of the posts include wire content, from either Canadian Press or other wire services, that have been published on multiple news websites.

Both Global News and CTV have published over a hundred pieces of content on Pokemon Go, but their numbers are larger because of both wire content, and pieces that were produced for local news stations as opposed to ones that are for the national audience.

Regardless, that is still a lot of internet real estate being taken up by one single topic.

“The stories have been doing well, though interest has been waning with each passing day, “ Steve Ladurantaye, managing editor of digital news at the CBC, said in an email.

The Globe and Mail has even taken the step of assigning one of their summer reporters, Karen K. Ho, to a Pokemon Go “mini-beat”, a result of the game’s surging popularity, Gabe Gonda, The head of features and weekend, told J-Source in an email. “We wanted to capture the impact it’s having beyond the daily accident stories, which are a beat unto themselves. How is it creating business opportunities? How is it influencing users’ behaviour online and off? What are its impacts on culture?” Gonda said. “It’s a bit early to say how the experiment is going.”

“Our Pokemon Go coverage takes on all kind forms,” said Jordan Timm, the executive producer of news at the National Post. The Post has, like other outlets, done an explainer, but also published a story by former Ottawa Citizen editor Andrew Potter that uses the game, in part, to talk about the death of reality.

Local news outlets have also gotten in on the fun. Some have sent reporters out in to the field to try and catch them all. Others, like Metro Halifax, have been profiling local fans.

First Canadian daily with Pokemon on A1? pic.twitter.com/39xIj006WE

Canadian Press style was even updated to include both Pokemon Go and Pokestops (where you go to refuel in the game). Canadian Press drops the accent normally included in the word Pokemon, because as Canadian Press Stylebook and Caps and Spelling editor James McCarten pointed out on Twitter, it messes with their clients production systems. Some outlets, like BuzzFeed, will be keeping the accent as is.

doesn’t mean you can’t use them yourself if your system permits. Same is true of italics

Pokemon Go provides a lot of angles for a journalist to cover, which is likely why we’ve seen so many stories in the past month. Pokemon first premiered in 1996, so there are now multiple audiences who are nostalgic about the game, not to mention those that are being introduced to it for the first time because of Pokemon Go. The game’s immense popularity just helps to fuel interest.

But it does raise questions about where resources go in newsrooms. In the same month as Pokemon Go’s release, there was an oil spill in the North Saskatchewan river; protests by activists who believe the government is stalling its inquiry into Missing and Murdered Indigenous Women; and the death of Abdirahman Abdi, who died after an altercation with Ottawa Police. Critics have charged that these stories have received very little national coverage.

It is not that media outlets can’t cover all these stories—but are they all receiving equal coverage time?

The good news, if you are sick of Pokemon Go coverage, is that the buzz may be coming to an end. “I think the stories did best before the app actually launched here because there was a weird sense of intrigue,” said Ladurantaye. “Nobody could quite picture what was happening and wanted more.”

Timm said that he thinks at this point it is a case of diminishing returns. “It was a story that was hot for a week and half or so online, and it has produced some really amusing local news style stories,” he said, noting that there wasn’t anything in the Post’s analytics that would make him want to allocate more resources towards covering Pokemon Go.

But don’t take that as a lack of personal enthusiasm for the game—Timm wanted it on the record that he is a level 11 member of Team Instinct. “The National Post has no time for Team Valor or Team Mystic.” 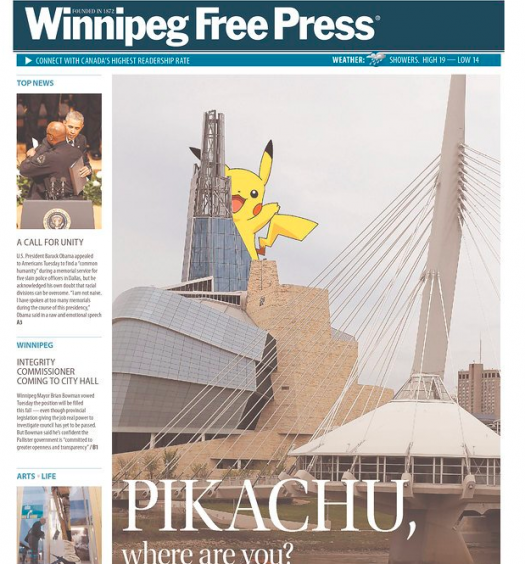