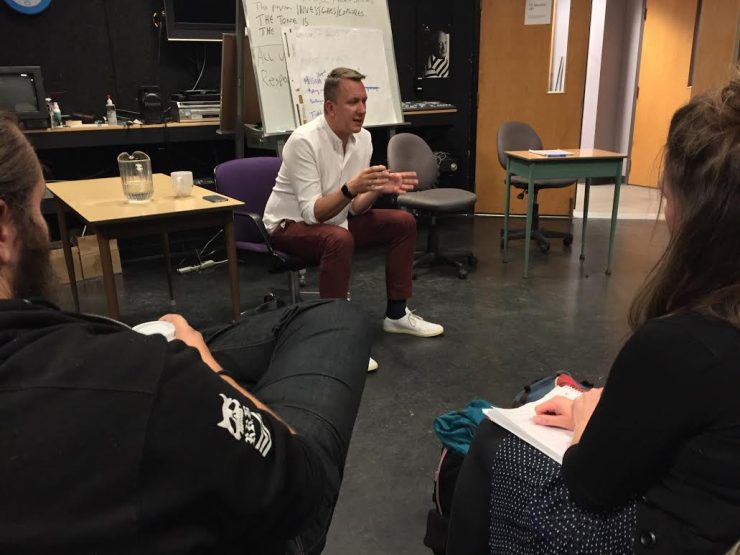 “Journalism and good stories are about real people, not talking heads,” says Stoffel, who tries to focus not just on conflict reporting.

“Demand better journalism. You guys are the consumers, so make it better for us,” Derek Stoffel urged attendees at the University of Regina School of Journalism’s annual James M. Minifie Lecture.

An enthusiastic hometown crowd greeted Stoffel, who graduated from the School of Journalism in 1996. Joking that he was probably the first Minifie lecturer to be dropped off by his parents, Stoffel credited his prairie roots for preferring fieldwork over press conferences.

“Journalism and good stories are about real people, not talking heads,” he said.

Stoffel recalled his first act of journalism was as a teenager video-taping his family’s 1987 harvest, while his first job out of journalism school was as an agricultural reporter. The experience of talking to farmers in their fields influenced how he approaches Middle East coverage today, spending time talking with people in markets and refugee camps.

Stoffel added that he fights to air stories that portray the full spectrum of Middle Eastern life, not just conflict stories.

“There are so many misconceptions about the Middle East and the people who live there,” he said. “You need to be immersed in a region, such as the Middle East, to really understand it.”

But that immersion is becoming all too rare, Stoffel said. As one news agency after another withdraws its correspondents from the field, CBC now remains the last staffed Canadian news bureau in Jerusalem.

CBC itself has just six English-language international correspondents left to cover the world, he noted.

As a result, journalists have to write what they’ve dubbed “the melt”—merging content from other sources into a story that appears to be original, but isn’t. Stoffel offered his coverage of the hajj stampede that killed hundreds of people in Saudi Arabia in late September as an example. The report relied on clips taken by others on the scene.

Despite his voice-over, “it wasn’t very much my story,” he said. By melting available footage, three networks ended up carrying virtually the same content.

“That’s not serving the audiences,” Stoffel said. Although melting is cheap—without travel costs or fees to security advisers, fixers and translators—it degrades quality journalism, he said.

“No reporter becomes a journalist to melt,” he said.

Another barrier he flagged is the Canadian government’s “aversion to the media,” including denying access to Canadian aid projects in the Middle East. “As citizens we need to demand a more open government,” Stoffel said.

Asked by an audience member about CBC cutbacks, Stoffel said he was particularly disappointed by the closure of the in-house documentary unit, which was home to some of the world’s greatest documentarians.

In response to another audience member’s complaint about inadequate reporting on Africa, he noted that closing CBC’s Nairobi bureau left an entire continent without ongoing coverage.

Stoffel ended the evening with a plea for members of the public to begin agitating for better journalism from the CBC and their government.

You can view the past several years of lectures online.