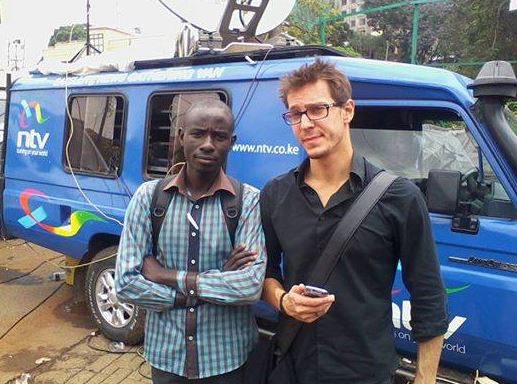 Two recent Canadian journalism graduates, dreaming of careers as international journalists, caught the break of a lifetime while on fellowships with the Aga Khan Foundation Canada.

Two recent Canadian journalism graduates, dreaming of careers as international journalists, caught the break of a lifetime while on fellowships with the Aga Khan Foundation Canada.

Wanting to combine her passion for journalism and travel, French journalist Flavie Halais applied for, and was awarded, the international fellowship. “I dreamed of working abroad as a journalist covering international issues,” she said.

The 28-year-old graduated from Concordia University in 2009, and after a stint interning at CBC Montreal, she worked as a freelancer before being selected as one of two Canadian fellows sent to Nairobi. Fellows spend eight months reporting on development-related issues in Africa or Asia working with partners of the Aga Khan Development Network.

David Meffe with a colleague from Nation Media Group in Nairobi

David Meffe, 23, was the only other Canadian journalist selected out of hundreds of applicants. Meffe graduated from Carleton University earlier this year and interned at his hometown newspaper, the Montreal’s The Gazette.

Meffe and Halais spent a month as interns getting situated at the Daily Nation, Kenya’s largest-circulation newspaper, when disaster struck.

“I was attending a talk given as part of a literature festival when word got out that a shooting took place at Westgate,” Halais said. “At that point we had very little information about what was going on and thought it was a robbery gone bad, which is not uncommon in Nairobi.”

Canadian media flocked to the story, as did all the big international media outlets. CBC, CTV, Ontario’s CP24, as well as Quebec’s TVA and CJAD radio approached Halais for help on the ground. She was hired as a freelance producer for Global Television and worked with a camera crew from London, U.K. that flew to Nairobi to cover the story.

“What started off as a robbery quickly became a shooting, then a hostage situation and finally a bona fide terrorist attack,” Meffe said.

Throughout the four-day siege, Meffe did a slew of hits for Canadian media, providing information about what was happening inside and outside of the Westgate shopping centre. He also wrote a story for Postmedia Network about Kenyans arriving en masse to blood donation clinics in an effort to help those wounded in the attack.

“There was something very cool in providing news from halfway across the world to people back home,” Meffe said. “For the first time in a long time, all eyes were on Nairobi, and I felt a certain sense of pride being able to properly digest a situation in Kenya and describe it for a Canadian audience.”

Halais said she felt the international media did a poor job covering the story. Most of the information she received was via well-connected Kenyan friends on social media, and due to her time spent in Nairobi, she was able to sift through the hearsay and provide a fair and accurate analysis of the situation for colleagues covering the event.

“After the end of the siege, I didn’t seek to write feature stories about it. I really needed to move on to something else and stop having to read accounts of torture and children killed,” she said. “I might get back to it later, a few months from now.”

While journalism school doesn’t prepare you to cover an event of this magnitude, Meffe and Halais now feel they have a better understanding of the East Africa region. The two will soon return to Canada, following the completion of their Aga Khan Foundation fellowships.

Meffe recalled advice he received from his favourite Canadian foreign correspondent, the CBC’s Nahlah Ayed, who flew to Nairobi to cover the mall attack.

“It’s almost surreal. You spend your whole life idolizing and learning from a group of people, then one day, you find yourself shoulder to shoulder with them, fighting for the same stories,” he said. “She told me to travel, never to lose my sense of adventure and always try to be better than I was yesterday.”

*Correction: An earlier version of this article stated the Global television crew flew in from Toronto to Nairobi, which was incorrect. They had flown in from London, U.K.

Adam Bemma is a Canadian journalist based in East Africa.