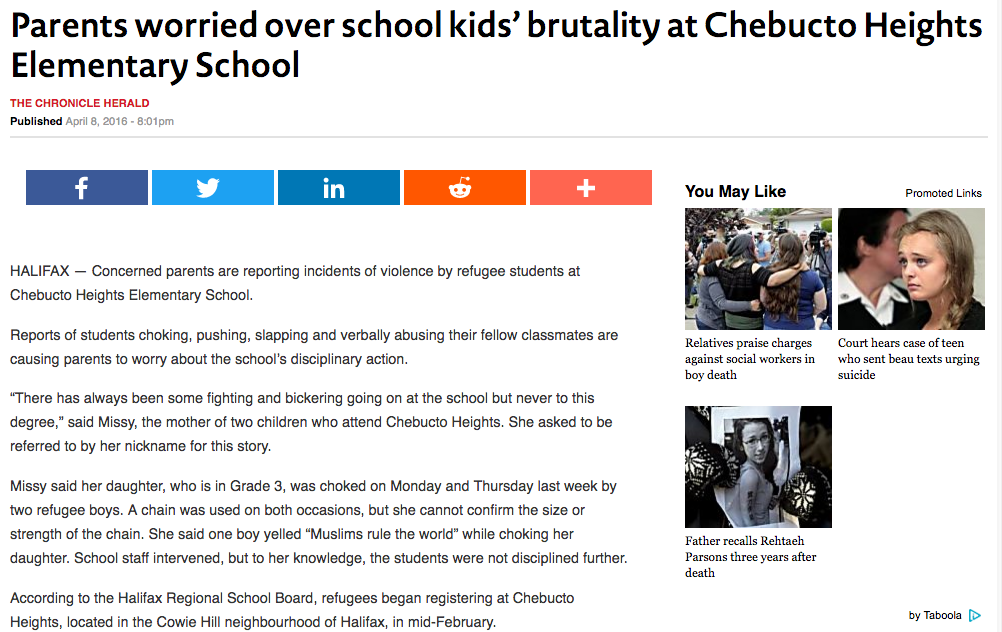 The story was removed on Apr. 10 after being online for two days.

Late on Friday, Apr. 8, a story was published on a Halifax daily newspaper’s website that left readers shocked and disappointed.

In the original story, a parent of two children at the school—who is only identified by a nickname—claims both her children were bullied by students the parent identifies as refugees. A second unidentified parent also claims her child is being bullied, though she do not say by whom.

By every test of journalism, the story seemed to fail, said Terra Tailleur, an assistant professor at University of King’s College journalism school. “It seemed like the Herald was asking itself how to tell a story without even asking at the beginning, ‘Is this a story?’”

Both key sources in the story are unnamed, and the events they describe are unverified and even in one case factually refuted—soccer was not cancelled due to violence, as “Missy” claimed, but ended because the term was over and is due to begin again in May, according to a school board spokesman.

The article linked the bullying to “refugee students” despite only having three anecdotal stories from twice-secondhand, unnamed sources in the article. Critics of the article called it xenophobic and fearmongering on social media.

The Chronicle Herald’s newsroom staff have been on strike since Jan. 23. Stories appearing in the newspaper are being written by replacement workers and have not included bylines since the strike started.

On Twitter, several people expressed their dismay that the story was posted at all.

Will the @chronicleherald retract and apologize for its shameful article on alleged refugee student “brutality”?

Real @chronicleherald reporters are on strike. Whomever wrote that would get an F in 1st year journalism class.

“When I first saw it…I just about fell over,” Martin O’Hanlon, president of Communication Workers of America Canada, the parent union of the Halifax Typographical Union that represents the striking Chronicle Herald workers, told J-Source. The story was also published in the printed newspaper, according to O’Hanlon.

“I’ve been a journalist for 25 years and I’ve never seen something so irresponsible reported in a reputable newspaper. It is shocking.”

Brian Ward, vice-president of news content at the Chronicle Herald, told J-Source he would not be giving interviews about the story. Mark Lever, president and CEO of Halifax Herald Ltd., did not respond to a request for comment.

According to CBC reporter Brett Ruskin, changes were made to the story on Apr. 9. On Apr. 10, the story was retracted and replaced with a notice explaining that the original story “needed more work.”

Tailleur said that given the outcry, there was a responsibility for newspaper managers to explain themselves as soon as possible.

A tweet sent out on Apr. 10 about the original story is still on the Chronicle Herald Twitter feed, although it links to the retraction. There are no tweets that specifically refer to the retraction at press time.

In a story in The Coast, one unidentified replacement worker said the story made them feel ashamed to be associated with the newspaper.

“The question now, is, what are the checks and balances in place?” said Tailleur, noting that with every story there are many questions reporters and editors need to ask.

The fallout from the story has been felt locally—the Halifax Regional School Board issued a statement on the afternoon of Apr. 11, with superintendent Elwin LeRoux stating that he was deeply offended “to see the school represented so inaccurately.”

“When our reporters and editors do go back to work, they now have to deal with this,” O’Hanlon said. “It’s going to take a long, long time to heal and it’s hard because our members will have to bear the brunt of this for a long time to come.”

The ethics of staging

Read More
The ethics of staging