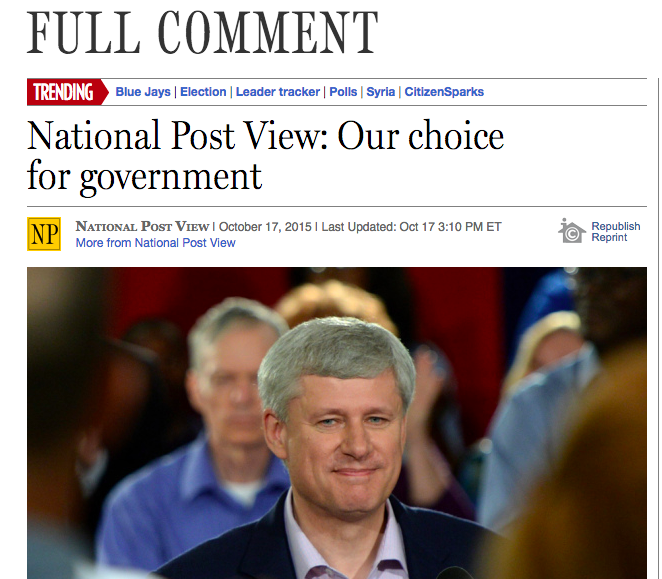 Conservative endorsements fly in the face of freedom of expression

Newspaper publishers, editors, have a responsibility to protect freedom of expression.

By Sean Holman, The Unknowable Country

By endorsing the Conservatives for another term in government, some of Canada’s biggest dailies have betrayed both democracy and themselves.

Last week, papers owned by Postmedia Network Inc., the country’s largest English-language daily newspaper publisher, ran editorials with headlines such as “Conservatives are the most prudent choice,” “Let's keep Harper's steady hand on the helm” and “No change is best.”

Those papers were joined by the Globe and Mail, which endorsed the Tories but not Stephen Harper—seemingly and improbably suggesting his party colleagues weren’t, at the very least, responsible for enabling their leader’s baser decisions.

In the main, the pith of those newspapers’ contestable argument is that, according the Vancouver Sun, “The Harper government has kept a steady hand on the economic rudder” and, as such, is “best able to maintain a stable and healthy economy.”

Yet at least some of those editorials also affirmed the Conservatives’ slide into crypto-despotism.

For example, the Montreal Gazette wrote that the party has “demonstrated high-handed disrespect for Parliament and the democratic process on occasion.” Meanwhile, the Ottawa Citizen was even more blunt, stating Harper has: “…picked political fights with major pillars of our democratic system—Elections Canada, the judiciary, officers of parliament—for no obvious reason apart from the fact that they appear to stand in his way. Under his watch there were unreasonably high levels of moral and even criminal corruption among some of those closest to him. He has indulged his MPs in their quest to make a mockery of Question Period.”

In a strange way, it was a very Canadian decision.

Our nation was born in the lukewarm cauldron of colonial deference rather than revolution, with its founding document declaiming the importance of peace, order and good governance.

That secular trinity—which contrasts sharply with the American commitment to life, liberty and the pursuit of happiness—is part of our often-unacknowledged political values.

For example, in 2014, 24 per cent of Canadian surveyed by AmericasBarometer said it would be justifiable for the prime minister to govern without Parliament if the country were facing very difficult times.

Among the other countries polled in the western hemisphere, only respondents in Haiti, Peru and Paraguay were more supportive of such a coup.

The same survey found that just 45 per cent of Canadians approve of people participating in legal demonstrations—10 percentage points lower than respondents in the United States.

Nevertheless, it was still jarring to see newspapers favour a party that has shown such disdain and disregard for democracy because, in its absence, journalism is put in peril.

Without the twin freedoms of expression and information associated with that political system, the power of reporters to challenge the decisions and actions of those they cover is crippled.

But the Conservatives, like the Liberals when they were in government, have further attenuated them, something the Paris-based Reporters Without Borders decried in a statement released late last week.

That attenuation deepens Canada’s democratic deficit, and possibly the financial deficits of its already flagging newspapers.

After all, who will pay to read those publications if the journalists who write for them become more and more frustrated in their ability to report on what the government doesn’t want the public to know about?

Yet neither Postmedia nor the Globe seem to have recognized that four more years of the Conservatives might be bad news for them—regardless of what it would mean for the rest of Canada.

It would be easy to blame the owners or managers of those newspapers for this lack of foresight. But, with a few notable exceptions, too many reporters are just as negligent in covering issues such as government secrecy and accountability.

That collective failure brings into relief the question of how much responsibility journalists and their employers feel they have to protect the freedoms they exercise on behalf of the public. And during this campaign, in newsrooms across the country, the answer, tragically, appears to have been very little.

• University of King’s College journalism professor Fred Vallance-Jones’s latest annual freedom-of-information audit has been released by Newspapers Canada. That audit “tells the story not only of Newfoundland and Labrador’s success and Ottawa’s failure, but also of foot-dragging by police forces, and widespread resistance at all levels of government to releasing computer data in formats useful in the digital age.”

• A coalition of 22 civil society groups concerned about the disrepair of Canada’s Access to Information Act distributed a statement noting “the NDP and Liberal parties have included commitments in their platforms to improve the Act. Unfortunately, the Conservative Party did not see fit to even mention access to information in its platform.”

• CBC News’s Neil Macdonald argues the federal government is prosecuting embarrassment by calling in the RCMP to investigate leaks at Citizenship and Immigration Canada.

• “Four years after he first asked Health Canada for all the information it had on a popular morning sickness drug, Toronto doctor Nav Persaud finally has the documents,” reports the Toronto Star. “But he cannot tell his patients or any other Canadians what’s in them” because of a confidentiality agreement he had to sign with the federal regulator.

• “Thousands of pages of correspondence and briefing notes on the federal government’s anti-terror Bill C-51 are so secret the government won’t disclose its reasons for censoring them,” according to Global News.

• “Transport Canada is not releasing the results of its last two inspections of the Ambassador Bridge,” reports CBC News.

• CBC News takes a look at the back-and-forth debate over cameras in the courts.

• “Despite several high-profile privacy breaches and controversies over the destruction of government documents, MLAs studying changes to B.C.’s Freedom of Information legislation have had to cancel public meetings due to lack of interest in the topic,” reports the Vancouver Sun.

• IntegrityBC executive director Dermod Travis argues that cancellation may have had less to do with a lack of interest and more to do with the fact those meetings were announced during a federal election campaign, on the Friday before the Thanksgiving long weekend.

• The Telegraph-Journal opines that the New Brunswick government’s “treatment of a series of independent legislative officers shows a disturbing pattern—a growing cavalier attitude toward these important watchdog roles.” That treatment includes ignoring the province’s information commissioner.

• The Times-Transcript’s Norbert Cunningham writes that the Atcon fiasco demonstrates “why taxpayers should demand far more accountability from provincial governments. They all provide grants, subsidies, and loans in efforts to spur economic development. Have we ever seen a full accounting of outcomes? We hear positive announcements and expectations. Politicians boast when recipients prosper, but run for cover if they fail. We get an overall accounting of spending and losses, but few details.”

[[{“fid”:”4842″,”view_mode”:”default”,”fields”:{“format”:”default”,”field_file_image_alt_text[und][0][value]”:””,”field_file_image_title_text[und][0][value]”:””},”type”:”media”,”link_text”:null,”attributes”:{“height”:3776,”width”:2555,”style”:”width: 75px; height: 111px; margin-left: 5px; margin-right: 5px; float: left;”,”class”:”media-element file-default”}}]]Sean Holman writes The Unknowable Country column, which looks at politics, democracy and journalism. He is a journalism professor at Mount Royal University, in Calgary, an award-winning investigative reporter and director of the documentary Whipped: the secret world of party discipline. Have a news tip about the state of democracy, openness and accountability in Canada? You can email him at this address.