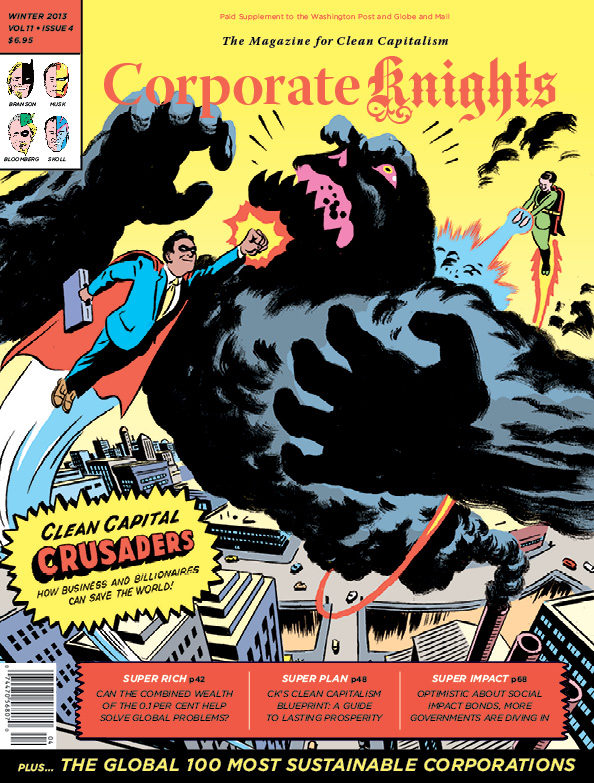 Before the magazine was launched, one of Canada's largest publishing organizations rejected the idea for Corporate Knights. The magazine has been in business for over a decade now and has faced a great deal of criticism along the way, but the source of most of that criticism is also the driving force behind it. Now, Corporate Knights just walked away with the country's top magazine prize and has a healthy business strategy.

By Eric Mark Do

Before the magazine was launched, one of Canada's largest publishing organizations rejected the idea for Corporate Knights. The magazine has been in business for over a decade now and has faced a great deal of criticism along the way, but the source of most of that criticism is also the driving force behind it. Now, Corporate Knights just walked away with the country's top magazine prize and has a healthy business strategy.

Founded in 2002, Corporate Knights seems to be financially and editorially successful surprising many when it won the top honour of 2013 Magazine of the Year at the National Magazine Awards.

Although Corporate Knights has revamped its editorial and artistic direction in the last couple of years, it's maintained its mission to push businesses, governments and educational institutions to adopt environmentally sustainable practices and policies. Essentially, the Toronto-based quarterly tries “to get good business (industry leaders) to behave more responsibly,” says editor-in-chief Tyler Hamilton.

One of the most important ways it does this is through a major ranking that's featured in every issue. These rankings — the Global 100 (most sustainable corporations); the Best 50 Corporate Citizens in Canada; Cleantech Index; and its Knight Schools Survey — are the backbone of its editorial content. Most of the magazine's 10-person staff are dedicated to doing research for the rankings, based on the criteria of 12 “key performance indicators.” Then, the magazine's editorial team uses that data to write articles about the subjects and their respective industries.

The magazine boasts a circulation of more than 130,000, mostly because it's distributed with The Globe and Mail (100,000) and the Washington Post (10,000), plus direct mail and electronic newsstand sales such as on iTunes. By comparison, the 10th highest-circulated Canadian magazine Our Canada comes in at just under 160,000. Co-founder and president Toby Heaps tells J-Source that Corporate Knights pulls in about $1 million in revenue a year and more than 65 per cent of that comes from advertising. He adds that Corporate Knights is majority employee-owned, with some minority outside investors that include two angels and a west coast credit union.

Corporate Knights' rankings are also cited around the world and in publications such as Forbes, The New York Times and the Huffington Post. But the organization has also attracted plenty of criticism, mostly for how rankings are determined and the results themselves.

In Canadian Business, Chris Macdonald called Corporate Knights’ criteria for ranking sustainability misleading. Fewer than half of the key performance indicators relate to environmental sustainability, he argues, so calling it a social responsibility ranking might be more appropriate. When a company sends out a press release touting a Corporate Knights ranking for being “sustainable", it gives the impression of being environmentally sound, “and that’s just not what’s going on,” says Macdonald, a Ryerson University business ethics professor who also specializes in corporate social responsibility.

“My sense is that their heart is in the right place — they're trying to do good stuff, they're drawing attention to important issues — I just think on this particular thing, they're off target.”

The magazine also gets a lot of heat for including certain companies in its rankings, such as Barrick Gold, which ranked higher than Mountain Equipment Co-op on the latest list of “Best 50 Corporate Citizens in Canada.” But Hamilton defends the decision.

“We constantly battle this. When we do our rankings we are agnostic to the services and product(s) that companies come out with.” For example, Corporate Knights can't just rule out all oil, gas or mining companies — because their product is necessary for the economy, he says.

“That's a big thing about us: we're a business magazine, we're not anti-business — it's about making business work better.”

Corporate Knights does however, exclude companies that produce products which have been proven to kill people, such as guns and tobacco. For some, that's not enough and the magazine continues to get attacked for its rankings.

Liberal and left-leaners attacked the high ranking given to Barrick Gold: an article in NOW Toronto damned the magazine's claim to “clean capitalism" as "all show, no substance." NOW Toronto founder Alice Klein tells J-Source the ranking “just suggests that they need to work on their criteria." The Council of Canadians called the ranking for most sustainable mining companies "beyond pathetic." And from the right, Conrad Black labelled a Corporate Knights issue as nothing more than "tired lefties on parade."

Heaps counts that as a “good indicator” that the magazine is doing something right. “If everybody was clapping for us, it would mean we're irrelevant. When you draw fire from opposing sides of the spectrum, that's a good place to be.”

Each issue (four a year) hits a “completely different demographic of advertisers,” Heaps says, adding that the number of ads with a green or social responsibility angle as a percentage of all print ads has increased substantially since the magazine was launched.

“So even though print advertising as a whole, the pie, has shrunk, the slice of that pie that goes to social or environmentally-themed ads has grown,” he says. “There's still a lot of people competing for those ad dollars but occupying that niche of being the magazine for clean capitalism, for social, responsible business, for environmentally-conscious business positions us well.”

But Corporate Knights has also lost ad dollars from certain companies and even a sector, for up to two years, after publishing a hard-hitting article.

In 2006, Corporate Knights published an article about how the oil patch could “easily” afford a carbon tax; then, the Canadian Association of Petroleum Producers (CAPP) phoned. They bought a dozen copies of the magazine and had them couriered to a board meeting. “After that, the oil money stopped flowing our way for a while,” Heaps says. But soon enough, oil companies started advertising in the magazine again and eventually CAPP did too. “All the while our editorial remained unaffected, publishing fair and critical pieces about oil companies.”

He adds that most companies understand that while ad space is for sale, a favourable outlook in its editorial space is not.

Creativity needs to be free

Corporate Knights looks like a magazine ready to jump out at advertisers and readers. Set aside notions that a business magazine has to have a stuffy look: art director Jack Dylan's approach is to be bold, fun and unconventional.

Last year, for an issue on “how business and billionaires can save the world”, the magazine had business leaders like Richard Branson and Michael Bloomberg depicted as Batman and the Green Arrow, drawn by freelance Marvel Comics illustrator R. Kikuo Johnson. And Tomer Hanuka, who was part of the art team for the Oscar-nominated movie Waltz with Bashir, transformed actor Mark Ruffalo into the Incredible Hulk for another illustration.

If there's photography, Dylan aims for "conceptual" (rather than traditional head shots filling the magazine with lots of pictures of people in suits).

For instance, for a recent article about the impact of a 3D printer on the environment, Dylan says they “placed what looks like a real tree inside of it so it's as if the printer printed the tree … a conceptual photograph that illustrates an idea and a feeling more powerfully than a photo of a 3D printer would.”

Since Hamilton joined Corporate Knights in October 2011 — he was the energy and technology reporter for almost 10 years at the Toronto Star and still occasionally writes his "Clean Break" column — he has pushed the organization to walk the talk on sustainability. Last September, Corporate Knights launched the Council for Clean Capitalism, a proactive advisory group comprised of 10 companies that identify three issues to focus on each year. The council — started by Heaps and in which Hamilton is an advisor — will work on those issues and the magazine will help get those issues and recommendations out to the public.

Klein agrees that the magazine provides a "valuable contribution" to the debate and "to the information base that people concerned with social change can benefit from."

Another accomplishment is Corporate Knights' voluntary enrolment into the B Corp Certification program to “meet rigorous standards of social and environmental performance, accountability, and transparency” – similar to a Fair Trade certification. There are currently 786 B Corps in 27 countries across 60 industries aiming to redefine success to include what's best for the world, not just shareholders, according to a description on its website.

Using a more environmentally friendly paper stock for the November issue of Corporate Knights might be considered something B Corp-worthy. Pages will be made of 60% straw — the first magazine of its kind in North America, says Hamilton. The magazine partnered with Winnipeg-based Prairie Pulp and Paper, co-founded by actor Woody Harrelson who will be featured on the cover for that issue. Hamilton says he hopes there’s some attention from other media for the unusual paper stock “because it's pointing to a more renewable alternative than just using old-growth forest.”

Hamilton, who is also the author of Mad Underdog Inventors and their Relentless Pursuit of Clean Energy and an adjunct professor at York University's faculty of environmental studies, seems determined to find other ways to make Corporate Knights more sustainable. “We're going to try to be examples of that change happening. Set an example for the publishing industry if we can.”

For Hamilton, he says he's close to the vision he had for the magazine's visual and editorial content when he first joined. “We would like, going forward, to get some harder-hitting investigative pieces, that's our next focus,” Hamilton says, adding that the goal is to break one story every issue.

As for the rest of the magazine, Heaps says it's not the same as other advocacy publications because Corporate Knights doesn't ignore inconvenient or uncomfortable facts and isn't afraid of challenging its premise.

“We're not ideological, we're violently non-ideological. We're pragmatic. We have a philosophy, which is that business has to be a part of the solution. And we have an editorial approach that looks into that — the good, bad and the ugly."

Heaps is also certain about what the Corporate Knights brand is about.

“It's about being in front of the pack and going someplace that feels good and getting there in a fun way.”