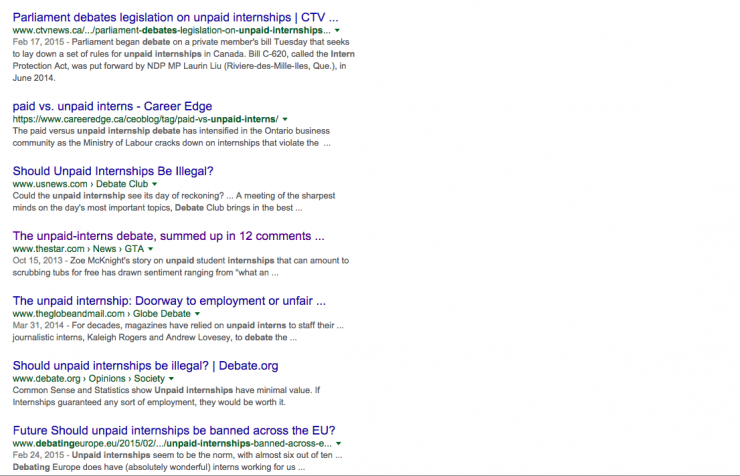 Toronto panel discusses why, despite crackdowns, unpaid internships remain all too common.

The past few years have seen a crackdown on corporations and organizations that are still hiring unpaid interns.

Despite the pushback, there is still a demand for internships, most unpaid. Why is the demand still so strong?

That was the main question under discussion at Interns, Connect! A Forum on Upsetting Unpaid Work. The event was held in conjunction with the launch of a special issue of the open-access journal tripleC called Interrogating Internships: Unpaid Work, Creative Industries, and Higher Education.

The two-hour panel took place at the Centre for Social Innovation Annex in Toronto on Thursday, Sept. 24 and featured Andrew Langille, a labour lawyer and general counsel for the Canadian Intern Association; Josh Mandryk, director of the Canadian Intern Association; Jainna Patel, a former intern for Bell Mobility; Katherine Lapointe, an organizer of the CWA Canada’s Associate Member’s program; Deena Ladd, founder and coordinator of the Workers’ Action Centre; Carlo Fanelli, a visiting professor at Ryerson’s Department of Politics and Ella Henry, co-chair of Students Against Unpaid Internship Scams.

Under the moderation of Toronto Star’s Work and Wealth reporter Sara Mojtehedzadeh, each panellist noted that the state of the “intern issue” is in need of a fresh direction.

The costs of a ‘lucky’ opportunity

Unpaid labour is a common reality for media workers—so common it’s an acceptable part of college and university curricula.

Unpaid and unfair labour can cause financial stress and negative health impacts as people juggle school, work, social lives and paying the bills. Two interns have died in the last five years—21-year-old American Moritz Erdhardt in 2013 and 22-year-old Canadian Andy Ferguson in 2011.

Erdhardt died after an epileptic seizure, which, though unconfirmed, was thought to be caused by fatigue after working long hours at a Bank of America branch in the U.K. Ferguson died while driving home after working an overnight shift at an Astral Media radio station in Alberta. Their deaths sparked public outcry for laws to protect unpaid workers.

The panellists emphasized the need to challenge widespread cultural acceptance that it is OK to work for free.

“Often, we have this idea that the work is good either because it is something you want to do, or because it’s a charity or non-profit,” said Henry. “Somehow, it doesn’t need to be paid, as if you’re somehow reimbursed in good feelings because you’re enjoying your job.”

“But enjoying your job doesn’t pay the rent,” she said.

But for those who are trying to make a name for themselves in the field, the opportunity to work in the industry—even doing an unpaid position at the bottom of the food chain—can be too good to pass up. And the bigger the corporation, the sexier the opportunity seems.

“It’s really hard to talk about work conditions when people make you feel lucky about getting the chance to work for free,” said Lapointe, arguing that this mindset is very common in the media industry.

“Especially when working for exposure…there’s this whole idea out there that media is work you do because you’re passionate and you love it,” she said. “It hides the fact that media work is still labour.”

Henry said legal unpaid internships that comply with the six conditions outlined by the Ontario Ministry of Labour can be just as exploitative. Post-secondary students who are already paying tuition and program fees may be working internships that are “indistinguishable from a summer job” and add no academic value—for free.

Ladd stressed those who can comfortably take unpaid internships should understand their privilege, as other forms of unjust and unpaid work, such as work performed by immigrants and racialized workers, does not receive as much attention as the internship issue.

“Racialized work is not sexy,” said Ladd. “If you’re able to take an unpaid internship it means someone else is paying [your] bills or you’re going into debt.”

According to Fanelli, income inequality and work life imbalances are associated with 40,000 premature deaths annually.

Fanelli said the percentage of those who reap rewards from internships is small, noting a two per cent turnover rate of internships in the federal public sector that turn into full-time positions.

However, Fanelli said there is a data deficit as many departments simply don’t track their internships, and that it is one of the single largest data deficits across the Canadian labour market.

“[There] is essentially no hard data tracking their [unpaid internships] successes and failures,” he said. “Most of what we do know comes from studies focused around survey and interview data.”

How do we challenge acceptance of unpaid internships?

Patel, who went public against Bell Mobility’s unpaid internship program in 2012—eventually leading to the shutdown of the program in 2014—said it’s a matter of everybody saying no to exploitative work.

“If we all tried really hard and stepped away from any exploitative opportunities like internships, then that’s a huge step from it being a norm,” said Patel.

Panelists also noted the need to have conversations with post-secondary institutions that include internships in their curriculums, as change is needed there, too.

While the panel said the internship narrative has taken a progressive turn so far, Langille said the debate is still in its infancy and the needs of young people need to be addressed further. “We’re failing a generation and we desperately need to change course,” he said.

[[{“fid”:”4873″,”view_mode”:”default”,”fields”:{“format”:”default”,”field_file_image_alt_text[und][0][value]”:””,”field_file_image_title_text[und][0][value]”:””},”type”:”media”,”attributes”:{“height”:1366,”width”:2048,”style”:”width: 75px; height: 50px; margin-left: 5px; margin-right: 5px; float: left;”,”class”:”media-element file-default”},”link_text”:null}]]Marielle Torrefranca is a writer and producer for CBC News Network. Past stints include reporting for CBC New Brunswick and internships with Newstalk1010, Citytv, 104.5 CHUM FM and Rive Gauche Media magazines and assisting with the creation of J-Source's International Reporting Bureau. When not doing the news, she is reporting on and photographing the Canadian music scene for her blog Substruct Live. Get in touch by emailing her here.