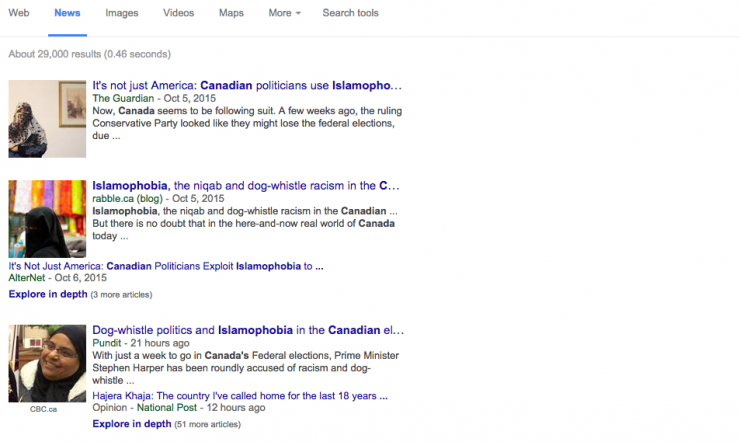 A newsroom lacking in diversity fails to deliver the whole story, while empathy drawn from experience can produce better reporting.

The benefits of diversity in newsrooms are obvious; with more perspectives on an issue, more facets will be found, reducing blind spots in coverage and resulting in more nuanced stories.

It’s an issue that journalists have explored before, as well as media critics, journalism professors and public editors across Canada and beyond, yet rarely are we given specific practical examples to point to when making this argument, satisfied instead to treat it as a self-evident fact.

This election season, however, coverage of specific wedge issues presented by the Conservative Party—the introduction of Bill C-24, the opposition to the niqab and the ongoing refugee crisis in Syria—highlight both the importance of diverse voices and the long way that the Canadian media still have to go.

While most media coverage of the Conservative’s investment in these issues has quite rightly criticized the cynical Islamophobia at play, the majority of this coverage has come from people who will never bear the brunt or feel the effects of the stoked racism they are covering.

You don’t need to have had your house burn down to cover a house fire, but sensitivity to an issue—even the ability to cover it accurately—is based in a basic empathy, usually drawn by experience. That’s what separates on-the-ground coverage of a hurricane from a weather report.

You could make the case that separation from an issue is a hallmark of journalistic integrity—might a reader approach a story about any of these interconnected instances of xenophobia with a grain of salt if the byline holds an Arab or conspicuously “Muslim” name? Possibly. It would be difficult to say, though, since most of those stories are found in the opinion section and not in the news section.

What you do find in the news, whether it be the front page, landing page or Sunday talk show, is “Old Stock” journalists. And while they have covered and criticized the strategy, up until this past week, that criticism had focused only on the cynicism of it. It was not focused on how it affects thousands of now disenfranchised, demonized Canadians.

It was only last week when Zunera Ishaq gave interviews to a number of outlets that the media finally thought to ask the people in the crosshairs. While Ishaq’s role as a major actor in the event means her perspective is crucial, this aspect of the campaign is being felt by, and making experts of, women across Canada who make the same choice as Ishaq every day.

Last week, Tonda MacCharles and Ben Spurr of the Toronto Star (with files from Amal Ahmed and Noor Javed) went further in their coverage by interviewing multiple women about their choice to wear the niqab.

As more of these stories have come to light, you can also see a definite trend in the tone of coverage from columnists across the board. Compare, for example, Andrew Coyne’s September 30 column, which describes the debate as ridiculous, to his October 7th, in which the debate is now insidious. By last week, Coyne had taken a compassionate tone for how, “the people singled out for the treatment must feel, at having their most profound beliefs held up to shame and suspicion.”

Would newsrooms, reporters and columnists alike, have explored this stigma, insecurity and violence that are now being institutionalized sooner if they reflected the communities that are being targeted? It’s difficult to say definitively but hard to imagine otherwise, since these effects are an inexorable aspect of the issue for those targeted by it.

It’s an important goal to aspire towards since better reporting on the human toll draws better attention to the curtailing of rights, allowing for the affective reportage that—to return to an earlier metaphor—separates hurricane coverage from a weather report.

However this Conservative strategy plays out, the gaping blind spot in its coverage will last as a practical example of how a newsroom lacking in diversity can fail to deliver the whole story.