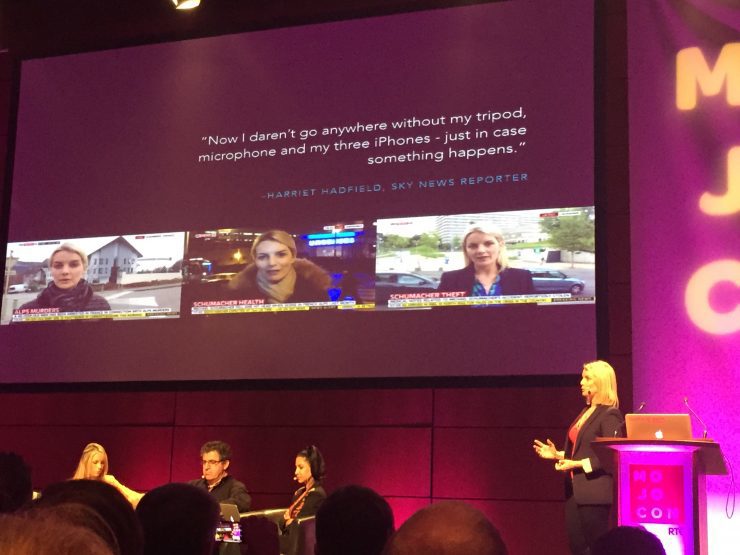 Embracing the journalism-changing potential of smartphones isn’t so crazy

Susan Newhook goes to #MoJoCon, a Dublin conference on mobile journalism, and watches it turn into a online community for discussion and experimentation.

I had promised Glen Mulcahy our Skype interview wouldn’t take more than 10 minutes;   just a few quick questions about the response to RTÉ MoJoCon Ireland, the mobile journalism conference he organized in Dublin this past March. But forty minutes in, we were still talking about “MoJo” and where the community evolving from #mojocon goes from here. We are not alone in this.

Mulcahy is innovation lead—chief trainer and proselytizer for new technologies and techniques—at RTÉ, the Irish public broadcaster. He was the near- single-handed driving force behind the conference, billed as “the first international conference focusing on mobile journalism, mobile filmmaking and mobile photography”. (The Online News Association’s mobile conference in London put an asterisk on the ‘first’; it was announced later but held earlier, with a somewhat different focus.)

More than 300 people from Ireland and 20 other countries geeked out at the Dublin Conference Centre on a chilly weekend in late March. They talked, listened, workshopped, tweeted, Storified, YouTubed and blogged the events and key points. Almost a month later, they’re still at it.

The conference came out of Mulcahy’s desire to put his many like-minded international training and social-media contacts “in the same room, with a pint in front of them,” he said with a laugh. “Those conversations are the conversations that will effectively sculpt where (mobile reporting) goes next.”  That knowledgeable but informal vibe ran through many of the sessions (and pints) during the conference and in the weeks since.

Though smartphones are ubiquitous in daily life and fast overtaking competing hardware as sources of news, many journalists and newsrooms still balk at the idea of using them for committing acts of journalism beyond tweets, Vines and short Periscope hits. A number of the noteworthy exceptions were at the conference: U.S. radio reporter Neil Augenstein has worked exclusively with iPhones and iPads in the field for five years at WTOP in Washington; Sky News’s Harriet Hadfield uses hers as field camera, live feedpoint and cue line (TV talk for phone connection to the studio) when the occasion calls for it. She she can be “live in 90 seconds.”

The #mojocon stream on Twitter started out as a typical conference live blog, but it has since turned into a hangout for a small-but-sturdy international community of practicing and would-be smartphone storytellers. They aren’t celebrating quick-and-dirty Twitpics or Vines; they look to follow ethical and aesthetic rules and professional workflows as they develop new ones. They try to recommend specialty gear: mics, lights, lenses, tripod mounts. (Google “iPhone mojo kit to be gobsmacked by what’s out there.) They experiment with a wide range of apps, from the ultra-simple text animation app Legend to the sophisticated and cinematic FiLMiCPro; they post the results and trade comments.

A self-confessed “mobile-holic”, Mulcahy tries not to sound too chuffed by it all. From the first morning, he said, there was “positive energy floating around the conference…When people broke out there was loads of conversations going on…to my amazement, they’re still talking.”

Beyond the Twitter traffic, there’s now a #mojocon Facebook group and the beginnings of a #mojocon section in the Dublin branch of meetup.com; sessions will be live-streamed and interactive, of course.

The makeup of the conference suggested that interest in mobile journalism techniques is strong outside traditional newsrooms. It may be a hint, if not a warning, to professionals. As Clay Shirky put it: here comes everybody.  The speakers and delegates included some working journalists, but also trainers and profs, marketers, filmmakers, freelancers, web developers and others hungry to try mobile storytelling and looking for ways to do it well.

Some have already taken the deep dive. One of the relatively few North Americans in Dublin, Geoff Roth, calls himself “the champion of MoJo journalism within the Fox television stations.” He is managing editor for KRIV in Houston; before that, he took two FOX outlets in Charlotte, S.C. mobile.

Roth says Europe is “way ahead of the curve” compared to the U.S., but “eventually you’re going to see the transition there as well.”

As Canadian stations lay off videographers and other journalists, these stories are provocative.  At RTÉ a group of journalists such as Philip Bromwell are building a solid body of iPhone video reports, but Mulcahy says that even on his home turf there is still both hesitation and pushback. The perception persists that smartphones will kill jobs, that they don’t deliver quality sound and video and don’t carry the credibility of old-school hardware.

His response: legacy media jobs are going away anyway, and no one is arguing that even a tricked-out iPhone is the same as a high-end Betacam or DSLR. The point is that the phone is always there, in your pocket. Furthermore, a great story is more important than the technology it’s made on: “We put wallpaper (more TV talk: generic ‘cover shots’) out on linear television, with a voice track—which basically is radio with shitty attached pictures—and we call that high-quality journalism because it’s being delivered on a TV.”

Besides, he says, the shift to video on mobile will create new story forms and markets for freelance journalists who “can create content that has a value which is not judged by the amount of money spent on the equipment but, in fact, by the quality of the  storytelling.” He cites Al-Jazeera’s AJ+ as an example of global outlets that draw on—and pay for—good mobile storytelling.

There’s no decision yet on a second conference. Much depends on a green light from RTÉ, and much of that depends on a plan to ensure not just more good PR for the network but a break-even budget: the March conference, a first-run competing with other European conferences around the same time, lost money.  If it doesn’t happen, the determined Mulcahy says he will find other ways to keep the MoJoCon-versations going.

5 lessons I learned from #mojocon

2. Videographers the world over hate vertical video. Even as they learn to deal with FaceTime, Periscope and other apps that throw traditional moving-picture aspect ratios out the windows.

3. Some of the most interesting television isn’t on television. Non-traditional news outlets such as VICE and Al-Jazeera’s AJ+ are tailoring storytelling for phones, developing new forms in the process.

4. A growing number of cameras, apps and software will help you take the audience right inside your story. Check out the immersive video app VRSE to see some of the potential—be sure to turn off your data first! You can slip some phones into Google Cardboard for an Oculus Rift-esque trip.

5.  The basic rules for good mobile journalism are the same ones video pros already know: learn how to use a microphone properly; incorporate the rule of thirds; zoom with your feet; don’t pan for no reason. And the most hardcore MoJo tech geek lives by the same mantra as any reporter: the technology only works in the service of story.

Susan Newhook teaches video journalism at the University of King’s College in Halifax. She wishes someone would come up with a better word than “mojo.”