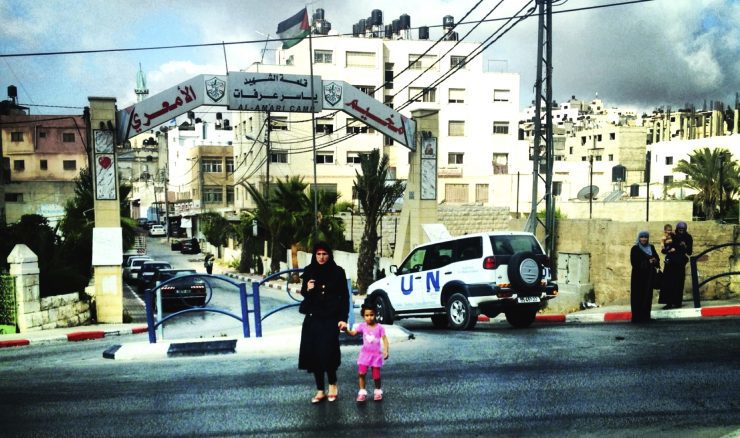 American report does little to suggest attainable solutions to the industry’s financial woes.

My introduction to foreign reporting came in July 2013, at the Palestinian Police Commissioner’s office in Ramallah, West Bank. I was there for an interview with Wafaa Mu’amma, the director of the Family Protection Unit.

I had never worked with a fixer to keep me safe or translate before and had never done an interview in a language other than English. I never had the need to until my visits to the West Bank, crossing Kalandia checkpoint at the separation barrier between Israel and the West Bank several times—experiences I wasn’t prepared for.

I was pursuing an article about how Palestinian organizations are working within the confines of Shari’ah and Jordanian law to help women experiencing domestic violence. The means for arranging interviews was something I learned as I went along.

This experience also became very real to me when I got off the bus in central Ramallah, flagged down a taxi, dialled my contact at one of the women’s shelters, handed my flip-phone to the taxi driver and waited. For almost every interview, I jumped into a cab without knowing where that cab was going.

Under any other circumstance this would be a reckless decision, but these women’s groups don’t list their addresses for safety reasons, and this was my only option to reach them.

When the taxi dropped me off, I’d get out and wait at an unmarked building. Eventually, someone from the organization would come out to retrieve me, and then he or she would place a finger on the fingerprint reader to access the building.

This was a starkly different reporting world than I was used to.

At a time when journalism and freedom of expression are under attack throughout the world, the truly brave journalists among us are foreign correspondents. Even braver are those who take their safety into their own hands and do so as freelancers.

Freelancers aren’t contracted by a news outlet, like a staff reporter is. This gives them the chance to write their own stories, but this freedom is traded in exchange for their security net.

According to the Committee to Protect Journalists’s records, 2007 was the deadliest year for journalists with 112 killed either by murder, caught in crossfire or combat or on dangerous assignments without support. Of those, 20 per cent were freelancers. In 2011, that ratio rose to 34 per cent of the 86 journalists killed that year. So far in 2015, 32 per cent of the 22 deaths have been freelancers.

In response to the growing risk, the Dart Center for Journalism and Trauma, at the Columbia Journalism School, released its single-page “Global Safety Principles and Practices” this past February. By April, 47 news organizations have endorsed international protection standards for those working outside the safety net of large media organizations.

This coalition is composed of prominent news organizations and advocacy groups responding to high-profile cases of journalists abducted and held captive, such as former CBC journalist Mellissa Fung and Canadian freelancer Amanda Lindhout; those injured in crossfire, like Canadian-born Associated Press reporter Kathy Gannon or those killed, as the Calgary Herald’s Michelle Lang, who in 2009 was the first Canadian journalist to lose her life in Afghanistan.

The document outlines ways journalists can protect freedom of expression when under attack by mitigating the risks both freelancers and news organizations take in conflict zones.

“It’s all pretty common sense,” said Hugo Rodrigues, president of Canadian Association of Journalists. “Not just for journalists themselves, but also for the news organization.”

But this manifesto is just another step in a history of perfunctory, failed global initiatives to protect foreign correspondents. Over the past nine years, the United Nations’ security and human rights councils have adopted three resolutions to improve international protection for journalists. Like the new “Global Safety Principles and Practices,” these resolutions have been unable to address the challenges of a changing media landscape.

To start, freelancing in the media is a wide-spread phenomenon. “There’s more freelancers today than there have been over the last decade, and I think part of that is just the way the news industry is changing,” said Francis Silvaggio, a former longtime Global National correspondent who worked alongside many freelance foreign correspondents in Afghanistan and Haiti. “We’ve seen that the mainstream industry has been downsizing bureaus, so there’s been an extra reliance on independent freelancers to provide coverage.”

CBC News began this process in 1999 when the network cut back on its foreign news coverage by eliminating three of its foreign bureaus: Cape Town, South Africa; Mexico City and Paris. In 2012, CBC News still had Canada’s most extensive presence of foreign bureaus with 13 before the outlet began closing its one-person bureaus and merging its larger bureaus in the U.S., the United Kingdom and the Middle East.

These cutbacks are not the only economic changes the new age of journalism faces; the news industry has abdicated its responsibility to provide institutional support, such as baseline insurance coverage, to freelance journalists.

“I think you can blame the news companies for engaging such people because they get in with visas on the strength of a letter to a freelancer, which is very thin and doesn’t mean anything,” said Matthew Fisher, Canada’s longest-serving foreign correspondent and international affairs reporter at the National Post. He suggested such letters merely indicate “interest” in the freelancers’ content.

“Wire services often rely on stringers or freelancers as well for content depending on the nature of the conflict,” said Rodrigues. “At least until they can get their own people on the ground.”

In 2013, Italian freelance journalist Francesca Borri wrote “Woman’s Work,” an essay for the Columbia Journalism Review that captures the unsupported, life-threatening dangers she faced while working in Syria. It pokes another hole in the “Global Safety Principles and Practices,” which doesn’t provide strong enough solutions for a major financial blind spot in the media.

In the article, Borri noted she is paid the same—$50 USD to several hundred dollars per article—regardless of whether she is working in an international war zone or safely at home. Risk isn’t taken into consideration.

This logic costs freelancers more than their income. Many can’t afford the necessary health insurance for injuries, let alone kidnap and ransom insurance. Nor can they independently pay the fee for a good fixer, who averages $100 per day and whose situational knowledge can save a journalist’s life.

The international group Reporters Without Borders offers insurance coverage  for its members through World Escapade Travel Insurance, but Canadian freelancers are excluded from some of the packages.

“For our generation of journalists, it was really our first opportunity to cover war,” said Silvaggio. “A lot of people walked in there with their eyes wide and trying to figure out what exactly you’re supposed to do.” But the reality of covering a war is still very different from training to cover one.

Before the tour, the Canadian Press sent Graveland to an accredited hazardous-environment training course in Virginia Beach, Va., run by the renowned Travel Advisory Group Inc.

“They taught us about landmines and improvised explosive devices, what to look out for so you don’t step on any of them, what to do if you were captured, how to behave and a lot of combat first-aid, ” said Graveland.

But Fisher, citing the variable quality of these safety courses, advocates instead for the value of military training and knowledge. He recalls that it took him 10 years to properly prepare for reporting on the front lines.

“We don’t send our soldiers to war after spending 24 or 48 hours preparing,” said Fisher, who is referred to by his peers as the “godfather” of war reporting.

While journalism agencies and advocacy organizations have a general consensus that freelance foreign correspondents should receive the same treatment, training, insurance and safety equipment as staff reporters, news organizations have yet to put forth the financial resources to enact this change.

Only 33 per cent of the participating signatories of “Global Safety Principles and Practices” are news organizations. Journalism associations and advocacy groups make up the other 67 per cent of supporters. The first Canadian organization to endorse the recommendation was the Ontario-based Canadian Journalism Forum on Violence and Trauma.

Freelance foreign correspondents need more than initiatives like the “Global Safety Principles and Practices” to properly equip them for conflict zone coverage. They also need the support of news organizations for training, insurance and safety equipment; not more information and unaccountable principles and practices on paper.

Note: This article has been updated to correct the timeline of when the Canadian Journalism Forum on Violence and Trauma endorsed Global Safety Principles and Practices. CJFT president Cliff Lonsdale has also written a response, here.