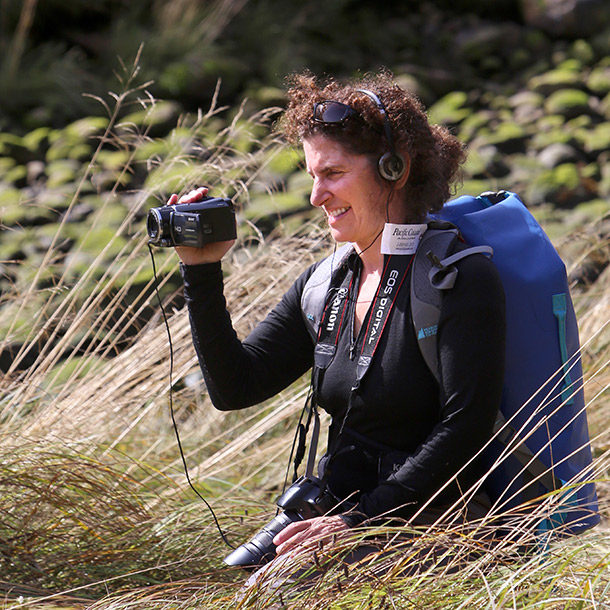 A hopeful moment for science journalism emerges on the West Coast.

Looking for a great story? Head for the coast. That’s the mission given to a team of journalists now fanning out all over the world, from their base in Victoria, B.C.

They write and shoot for Hakai Magazine, a brand new online publication that focuses entirely on the planet’s coastlines, bringing untold or unheralded stories of shoreline science and culture to light. Writers work side-by-side with some of the world’s leading researchers to transform scientific discovery into compelling tales. Features include how fuzzy raccoons are decimating crab populations in the Gulf Islands, what weird stuff artists have sunk to the bottom of the sea, and why thousands of walruses are storming the Alaskan shores.

The new magazine is the spawn of the Hakai Institute, a B.C.-based research initiative funded by the Tula Foundation. The work of Tula, founded by Eric Peterson and Christina Munck, includes rural health networks in Guatemala; and in B.C., programs in science, education and community leadership. (Peterson and Munck also invest in The Tyee.)

The Hakai Institute conducts long-term ecological studies on the province’s coastline, and the magazine will include stories based on their findings. But most of Hakai’s stories spread far beyond B.C. borders, with contributing writers and researchers from across the globe. Its recent launch included stories reported from New York, South Africa and the Mediterranean.

With hopes of becoming the premier publication on coastal life and science, Hakai’s first wave of stories includes an array of ambitious features and breathtaking imagery. The magazine is already making waves in the ocean of online journalism—some of the team’s work has been republished by Smithsonian magazine.

Jude Isabella, former managing editor of Yes Mag—Canada’s science magazine for kids—is a longtime science writer, and both a founding member and editor-in-chief of Hakai Magazine. The Tyee caught up with Isabella to talk about her entry into science journalism, starting a magazine in the 21st century and the need to start a coastal dialogue.

On running into the right people:

“I’m a science writer, a science journalist. About 20 years ago I decided that’s what I wanted to be. I enrolled at the University of Victoria in the anthropology department, because I was really interested in human origin stories, physical anthropology and evolution. In retrospect, I probably should have studied biology (laughs).

“In 2000, I got the job as managing editor of Yes Mag. I did that for almost a dozen years. But during the last few years [there], I started my MA in anthropology, and started writing a book that came out last fall: Salmon: A Scientific Memoir.

“Doing my book I kept crossing paths with Eric Peterson and Christina Munck, the founders of the Tula Foundation. After reporting on their scientists [that were Hakai scholars], our paths kept crossing. One night, we were lamenting about journalism, and the challenges journalism faces. Eric turned to me and said, ‘Let’s start a magazine!’ and I said ‘Okay! Sure!’ I got together with the former publisher of Yes Mag, and we came up with a proposal.”

On the genesis of a new coastal magazine:

“It was the natural outgrowth of reporting on the [Hakai Institute] scientists, talking to those scientists and spending time at the institute. It was a pretty special place. A lot of people from different backgrounds all come together to share their expertise, which is broad. It’s got breadth and depth. When they study science, they study people too—it’s science and society in the coastal ecosystem. There’s always been this idea that humans are part of the landscape and that they have been for a very long time. The scientists might be doing hardcore atmospheric science, but they’re also doing anthropological and archeological research. It’s an ecosystems-based approach to scientific research.

“[The proposal came] when I thought about the Hakai Institute and what it was, and how I thought it was kind of unique. When you start looking around at magazines—there’s magazines about boats, magazines about places. If you’re looking at subjects like coasts and islands, [the magazines are] always tourism and adventure travel. As far as I could tell, there was nothing that was looking at the world’s coastline. It just seemed like the natural thing to do.”

On giving a voice to those without one:

“We really like to reach out to writers in places where journalism doesn’t have the depth that we have in the western world, and they suffer for it. Places where [journalists are] not always welcomed by governments. [The magazine] is trying to reach out to them and provide a place where their voices can be heard. I’m working on a piece by a Zimbabwean journalist about climate change in a particular city in Mozambique—he was arrested last year for trying to report on pollution.”

On uniting the coastal ‘tribe’:

“Over 40 per cent of people live within 150 kilometres of the coast, and all those people who live that close to the coast share a lot of things. [For example], coastal ecosystems are the ones that are bearing the brunt of shipping, and that doesn’t change no matter where you are in the world. It’s something that affects everybody, everybody in the tribe so to speak. Coastal ecosystems in a lot of ways are on the front lines of climate change with sea level rises, and major cities having to deal with rising water levels.

“We’d like to see Hakai Magazine as a place for this conversation from people around the globe, because some people are doing pretty amazing things, and it would be nice if people knew what somebody else was doing to solve a problem, or to be made aware of a problem that they didn’t know about. It’s about creating connection. And the best way people retain information and knowledge is often through a well-told story.”

On the role of journalism:

“I think it’s a responsibility of a journalist to educate to a certain extent. I’ll never forget, I went to the MIT Knight Science Journalism symposium and Henry Jenkins, who writes about education technology for for MIT Technology Review, was speaking. I always loved reading about him, because I thought he was very good and very insightful. He did this presentation about elections and how journalists can inform the reader, and how he thought journalism had a role to educate. I was the only science journalist for kids there, and I remember that all the journalists lined up to tell him that it’s not their job. They said, ‘This is journalism, we’re not educators.’

“I had gotten in line, [but] they cut it off just before I got to speak. I just didn’t agree with them, and I totally agreed with the speaker. How do people get their information? How do people have daily conversations that aren’t just about them, or people they know? They have them by accessing media. Shouldn’t they be educated, be informed about something? Isn’t the act of gleaning information educational?

“The reason they are able to say something interesting is because they’ve read a newspaper, or a magazine, or they’ve seen a really great documentary. They’re not going to pick up a textbook on ecology to understand risk aversion. They have things to do. They want an interesting story, and they want to take away from it.”

On the hopeful future for Hakai (and writers, too):

“I think [Hakai] gives writers a lot more opportunities. If we understand media as something that’s really important for democracy, and if we allow for more publications like Hakai, it allows more of a dialogue in lots of different areas. If we understand that media is an important way to reach a population so they can make informed decisions, then maybe more people will say, ‘Let’s create a vehicle for a voice, or a multitude of voices.’ As we become more successful, then others might throw their hat in the ring and say ‘You know what, this is important too.’ The launch of Hakai is an important moment in journalism.

“We want to be the place where the conversation about the coast is had, between groups all over the world. If they want to know something, and they want an authoritative, informative and accurate place to get the information, then they’ll think of us.”

This article originally appeared on The Tyee, and is reprinted here with permission.