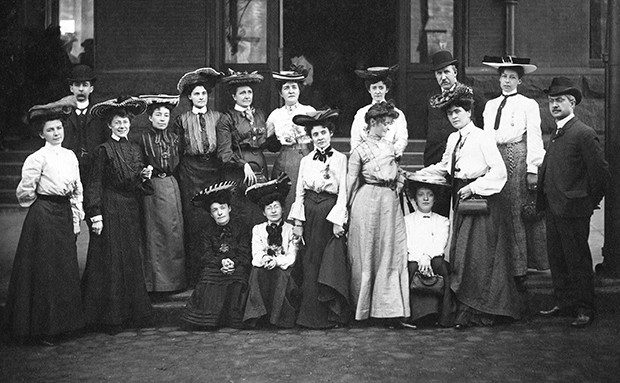 How 16 daring women changed the face of Canadian journalism

That discovery propelled my effort to shine a light on the neglected female pioneers in Canadian journalism.

My quest began in 2004 at a weekend celebration in Ottawa commemorating the 100th anniversary of the Canadian Women’s Press Club — a club I hadn’t known existed.

I learned that it was formed on a Canadian Pacific Railway car carrying 16 women to cover the St. Louis World’s Fair in 1904. Eight women were francophone, and eight were anglophone.

I learned that the Press Club served as a powerful vehicle for female journalists in that era — women who did not have the right to vote, who could not hold political office, who were rarely educated beyond high school and for whom marriage and motherhood were deemed the proper path in life.

I set out to document the club’s birth. Covering a World’s Fair was a momentous assignment for these journalists who were limited in their roles to writing about women. Now they were given free passage on the train, a privilege previously accorded only to male journalists, to cover what was considered one of the most important news events in the world.

The articles they wrote detailing their trip to St. Louis became a potent tool in my effort to recreate the club’s beginnings and examine the lives of the women on the train. Many were considered superstars in their day. The group included Robertine Barry, the first woman hired by a newspaper in Quebec and later founder of her own newspaper; Léonise Valois, the first woman to publish a volume of poetry in Quebec; Kathleen “Kit” Coleman, the first woman in Canada to be accredited as a war correspondent; Anne-Marie Gleason, founder of a popular Quebec magazine; and Kate Simpson Hayes, whose biography of a Quebec priest was lauded by the New York Times.

Why were these talented women largely forgotten?

The answer partially lies in the role they played on newspaper staffs. Women journalists at that time were hired to write a so-called “women’s page,” designed to attract female readers to the newspaper in order to please advertisers. The page offered personal observations written by a journalist, bits of poetry and prose gleaned from other sources, society news, and letters from readers (published with a reply).

Although the women’s page drew a large and avid readership, most male journalists deemed it inconsequential. For decades, women who wrote and edited the page were routinely marginalized by their coworkers, physically separated in the newsroom and even placed on a different floor.

On that pivotal anniversary weekend in Ottawa, when club members in their 80s and 90s gathered to celebrate what others had begun one hundred years before, there was a bittersweet moment amid the joyous reunion. It was announced that the club would fold. Membership had dwindled bit by bit from a peak of 700 four decades ago to only a few dozen. The doors that swung wide open for women of my generation had made a press club for women obsolete.

Young women working in the profession today have told me they still feel a need for a press club. Will they resurrect it? I watch with interest.

Concordia journalism professor Linda Kay is the author of The Sweet Sixteen: The Journey That Inspired the Canadian Women’s Press Club (2012), which came out earlier this month in French. Read an excerpt from Elles étaient seize. Find out more about Linda Kay’s early career as a sports columnist at the Chicago Tribune.