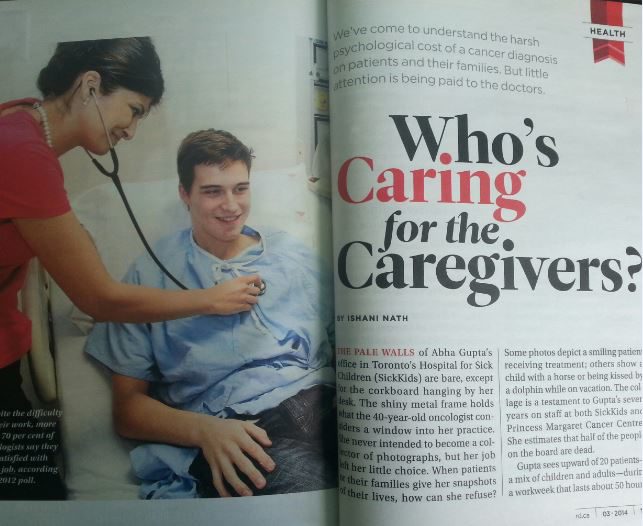 How to keep your emotional distance as a journalist

Journalists often work on stories that interest them, and sometimes that interest can be personal. So how do you separate your story from the story you’re writing? Ishani Nath explains how she wrote an article about oncologists while waiting in her mother’s hospital room as she battled cancer.

Teenagers aren’t usually bald, but that is the only look I have seen on 18-year-old Michael Friedman. The teenage Ewing sarcoma patient lay in a SickKids hospital bed, receiving chemotherapy drip-by-drip, while I furiously recorded observations for my feature on cancer caregivers—recently published in the March issue of Reader’s Digest Canada. It was my first time seeing cancer as a journalist, but I had witnessed this disease before.

My mother was first diagnosed with ovarian cancer in 2008. More than four years later, she was in remission and I had emotionally recovered enough to examine cancer as a reporter. “Who is Caring for the Caregivers?” explores oncology from a physician’s perspective and the emotional toll involved with this line of work. However, what the final draft does not reveal is that in the past few months of reporting, my mother’s cancer returned.

“The closer you can relate to a patient, the harder it is as a doctor,” oncologist Abha Gupta, one of the main voices in the feature, told me during an interview. I realized that as a journalist, being personally connected to a story has similar side-effects.

Though my professor at Ryerson University warned me that this type of story could be emotionally taxing, I thought I would be fine. I had been through this before. But as I witnessed patients like Michael receive chemo and heard how Dr. Gupta could no longer attend her patients’ funerals because she found it too draining, this story started to take a toll on me. When Taira Stewart—a 35-year-old sarcoma patient and one of my key sources—died in October, it brought me to tears.

“When you’re talking to people and they’ve been through these horrible experiences, those images stay with you,” said former Globe and Mail health editor Paul Taylor. In a 2010 survey of more than 80 television reporters exposed to violent footage on a daily basis, a majority of the employees reported having recurring and intrusive memories.

“[Journalists] feel terribly torn by their sense of obligation to get the story yet the emotional drain on them that the story evokes also can be very damaging,” said Jeffrey Dvorkin, program director for the University of Toronto Scarborough’s journalism program. “There has to be a way in which the journalist is able to professionally handle these emotional challenges.”

While my personal experience with cancer was the original inspiration for the Reader’s Digest Canada story, I had to learn to actively separate my story from the story I was writing—similar to how, in the feature, Dr. Gupta describes drawing a line between her home and her hospital life. This distinction allowed me to maintain my objectivity, even when I was writing about oncologists from my mother’s hospital room.

“You’re writing about it professionally, so it’s kind of therapeutic in a way. You’re not necessarily focused on your own particular situation,” said Taylor, who wrote a number of articles for the Globe and Mail in the 1990s about his struggle with a repetitive strain injury. Taylor added that this separation is not only beneficial to the journalist, but also for the quality of work.

And while being connected to a story creates challenges, it can also create opportunities. “If you’ve experienced something yourself, it actually gives you greater insight into a particular problem. It’s not as abstract,” said Taylor.

Being there when an oncologist told my mother that her cancer had spread to her lungs and lymph nodes or hearing the disappointment in her surgeon’s voice when a procedure did not go as planned gave me a better sense of what questions needed to be answered by my piece.

“It’s always different when you’re on the inside of the issue…as a reporter, you’d be asking things that a patient would actually care about,” said Taylor. “You’d be more in tune with what other patients are feeling because you’re actually going through the same thing.”

Through my reporting, my view of my mother's team of physicians changed. When I heard that my mother’s family doctor responded with a quiver in her voice when she found out my mother’s cancer was back, and when I saw her oncologist’s surprise when we asked about his vacation plans, I realized this story had changed my perspective. I was seeing these doctors as people for the first time.

According to psychiatrist Anthony Feinstein, this type of reporting presents a challenge to journalists to keep their lives balanced.  “You’ve got to watch out for your health…[and that] you don’t completely lose yourself in the story,” said Dr. Feinstein, who specializes in the psychological toll of war reporting. “It’s not to say that you shouldn’t [report on personal issues], but just be aware that by doing something like that, in essence, it becomes a more difficult situation to deal with emotionally.”

For journalists who are personally invested in difficult stories, Dvorkin recommends disclosing these details to editors so they can put “an extra antenna up,” watching out for the well-being of the journalist and the story. The journalism ethics professor also advised being upfront with readers about your connection to an issue. I opted to exclude my narrative from “Who’s Caring for the Caregivers?” because ultimately, this was about the doctors, not me. Rather than being part of the draft, my personal experience with cancer served as motivation.

“Many people experience bad things and you want something good to come out of something bad,” said Taylor. “If something negative happens to you and you write about it, you hope that others will learn from your experiences so it can benefit other people so, in that way, it’s not a complete loss…there’s a purpose to it.”