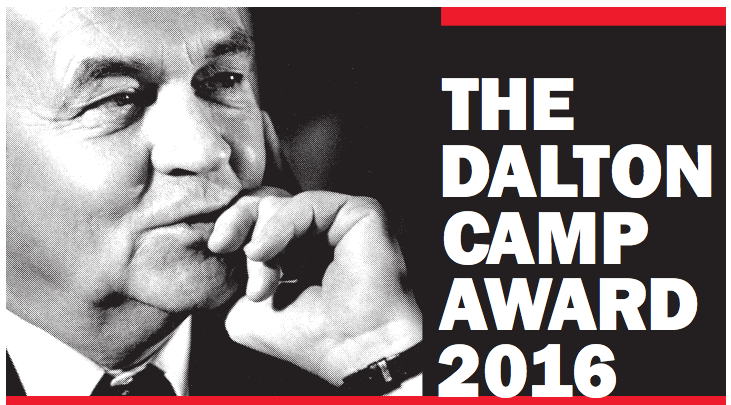 I Want to Be Part of the Conversation

Winner of The Dalton Camp Award on why freedom of expression changes us and makes us better.

FRIENDS of Canadian Broadcasting announced The Dalton Camp Award in 2002 to honour the memory of the late Dalton Camp, a distinguished commentator on Canadian public affairs.

The Dalton Camp Award goes to the winner or winners of a juried essay competition on the link between democracy and the media in Canada.

This year, the winner is Kim Echlin for her essay I Want to Be Part of the Conversation.  Her prize consists of $10,000, as well as a bronze cast medal designed by the late Canadian sculptress Dora de Pédèry-Hunt.

The best job I ever had was as a television arts producer on the CBC current affairs program The Journal. We began each day by devouring the newspapers before attending the morning meeting where researchers, production assistants, producers, editors and on-air reporters pitched news stories from around the world. Everyone was asked to participate. In that unadorned boardroom, sitting on chairs, perched on tables and balancing coffee cups, pens, papers, newspaper clippings and books, the people who put together the evening news grappled with events under the leadership of executive producer Mark Starowicz. The discussions were shaped by passionate and particular interests, egos, intelligence, competitiveness, edge. From those discussions senior editors determined where our day’s energies would go. When international events changed, we changed with them, shifting our focus right up until the show went to air every night at ten. I quickly learned how to both sprint and marathon in a news environment with people who made each other smarter, more critical, more tolerant and often more daring. It was not easy, and disagreements erupted frequently. That place was a lively example of one of democracy’s great qualities—the open exchange of ideas.

In the arts department there were rarely emergencies. But one Valentine’s Day, in 1989, I had to stay late at work. A fatwa had been ordered against the novelist Salman Rushdie.

The previous fall, I had argued to cover this little-known British writer’s new book, The Satanic Verses. I had pitched an interview with Rushdie when he was visiting Toronto for the International Festival of Authors. The competition for air time was fierce, as so many more famous writers would be in town, but my editor, Barbara Kennedy, finally agreed when I showed her the inventiveness of Rushdie’s prose style. It was a prescient decision because our interview was to be his last on Canadian television before he went underground.

I met Rushdie with our camera crew at a park on Jarvis Street. The leaves were deep gold and russet, extravagant solace against the coming winter darkness. Rushdie moved with a kinetic energy, taking it all in, noting with amusement the Bombay Palace Restaurant behind us, the Salvation Army, the copper-roofed spire of St. James Cathedral rising above the trees. He had a rare talent of speaking with both force and charm. His publicist had strictly forbidden me from mentioning the unofficial rumours of a fatwa. I had prepared to interview Rushdie about his prose style. The idea of one man ordering a British novelist’s death for writing a fiction seemed an outlandish story at that time anyway.

But, as soon as the camera was rolling, before I asked my first question, Rushdie said, “The biggest problem with this fatwa rumour is that none of them have read the book!”

These were early days. It was exactly ten years after our Canadian diplomat Ken Taylor played his dramatic role in saving American hostages in Iran during the revolution. It would be another twelve years before the attack on the World Trade Center. The fatwa against Rushdie would not even be formally declared for another four months.

While the crew was packing up, I asked Rushdie why he had decided to go public in spite of his publicist’s warning to me. He began to muse aloud about literature and politics. He had not yet worked out the eloquent and reasoned position on freedom of expression that we associate with him today. This would be hard won and chiselled out of his life in forced hiding.

Salman Rushdie was still primarily a novelist, a very good one. He was reinventing English vocabulary, creating new, ebullient rhythms and weaving his plots from the echoes of other stories and languages, both secular and sacred. He was writing tales of migration and of cultures rubbing up against each other. He was writing fictional histories of colonialism and countries divided. He was riffing and mixing it up and telling it as an Indian and an Englishman, a wanderer, an angel and a dreamer. He was being an artist.

Looking back, there was an innocence to the day.1 I was listening to a writer thinking aloud in the first moments of his persecution. It was months before the murder of his Japanese translator, Hitoshi Igarashi, the stabbing of his Italian translator, Ettore Capriolo, and the shooting of his Norwegian publisher, William Nygaard. It was the still moment before people have grasped that they are in danger.

As we turned to walk back toward the lake, Rushdie looked at me, the light in his bright eyes shifting from anger to disbelief. Then he suddenly stopped and said with fresh decisiveness, “I want to be part of the conversation.”

We know now that he would not remain silent. But at that moment not even he knew, really knew, what he would do and what the cost would be, and how long it would take and how many lives would be changed. None of us knew how violence in the name of fundamentalism would come to dominate the media as we were stepping out of one century to begin another.

Where we are uncomfortable, that is the place to go.

In the twenty-seven years since Salman Rushdie declared his determination to speak out, the world has been obliged to confront acts of violence, too often wrongly claimed in the name of Islam. In Canada, 3.2% of our population is Muslim, which makes Islam our second-largest religion, after Christianity. In Canada, our citizens are from nearly every country on earth, and we are responsible for the ongoing privilege of listening.

We need to remember our country’s long tradition of freedom of expression, its successes and failures. As early as 1759 French-Canadian Roman Catholics were allowed the right to worship by their British conquerors. This right was not extended to our First Nations, whose practices were not even recognized as religion. Canadians have always lived in the tension of different linguistic, religious and ethnic groups. We have not always been successful, as we know from our long history with First Nations, Japanese-Canadians, Chinese-Canadians, LGBTQ human rights and other struggles. But I think that the willingness to grapple with these tensions defines us. Our media plays a critical role in continuing to reflect and to invent our uniquely Canadian voice by examining these tensions and by being familiar with our Charter of Rights and Freedoms.

I think, for example, of the work of Sheema Khan for The Globe and Mail. She has written essays and participated in on-line discussions, fostering the exchange of ideas and patiently explaining cultural context. When she wrote an essay expressing her dismay at the violence acted upon Canadian women wearing headscarves, she articulated for many of us our protest against actions of hatred and violence and the agitation by the former government. Khan did not stop with writing an article. She included an email address at the end of her column, an implicit invitation for more exchange.

I wrote to her that I still hoped for our collective ability to reimagine ourselves. I told her about my own writing and research on forced marriages in many religions in Canada, and about our need to keep peeling away surfaces so that we know what is hidden under our visible lives.

I was not the only one who wrote to her.

This is what our media—now—can do. It can create opportunities for us to communicate directly with one another. When our media is intelligent and informed, when it gives voice to our differences, it can facilitate all of us being part of the conversation. I think that connecting us directly may be media’s greatest contemporary innovation. How it does that will be the creative challenge.

Sheema Khan responded directly to my email, acknowledging the importance of reimagining ourselves. She wrote, “It is essentially hope, hope which remains eternal. This week, I have been inundated with messages of support and kindness. This is the Canada that I know and love—and I will remain forever hopeful.”2

Canadian democracy has grown, in part, from our experiences of difference. Lorne Waldman, the attorney who successfully fought the Conservative government’s ban on wearing a niqab during the citizenship oath, warns that we must continue to defend the right of all Canadians to express themselves.3 His personal story includes grandparents who came to Canada to escape Russian pogroms in the early 1900s and, later, devastating family loss during the Holocaust. Mr. Waldman has devoted himself to immigration and refugee law, an integral part of our democracy because Canada admits the highest per capita number of immigrants in the world. Because of his recent experience of anti-Muslim sentiment, he is undertaking a speaking tour in which he will address “the acceptance of difference.” His first stop? Law schools. Perhaps the next stop will be journalism schools, to remind us that to cover such stories we must be informed about our Charter. We must ensure that all citizens have a voice. And are heard.

In the fifth century BCE, in the polis of Athens, the first democracy, or “rule by the people,” excluded women and slaves. Anyone who was not Greek was called a barbarian.4Over the centuries, the ideals of democracy have expanded and been shaped differently in different places. Like a great novel, democracy is creative. Like a great novel, it reinvents its language and its shape. And as we interact with it, we reinvent our world views and ourselves.

The role of the media in democracy is to resist pretense, to defy any crust of lies, and to enable us to communicate with each other. Havel writes that every dissident was first an ordinary citizen who simply engaged in political activities, someone with a “higher degree of inner emancipation.”

To tell the truth.
To act from inner freedom.
To live in creativity and confidence with others.
This is the work of a citizen.

When we engage with the truth, we may discover to our surprise that it looks different from what we anticipated. Freedom of expression changes us, and makes us better. It asks for a tolerance that is demanding, that distinguishes between our individual and our collective identities. It asks for a fluid idea of who we are and who we are becoming. People die, people risk their lives for free expression. Why? I believe this comes from a spontaneous and indisputable loyalty to our shared humanity. Our democracy is sustained by resilient communications. Our democracy is shaped by the moment when one of us rejects silence and says decisively to the media, “I want to be part of the conversation.”

2.   Sheema Khan continues her strong advocacy work, and gave permission for the use of this quote from private correspondence.

4.   The history of the word produces a shudder as we recall its recent collocation by our former government with “cultural practices.”