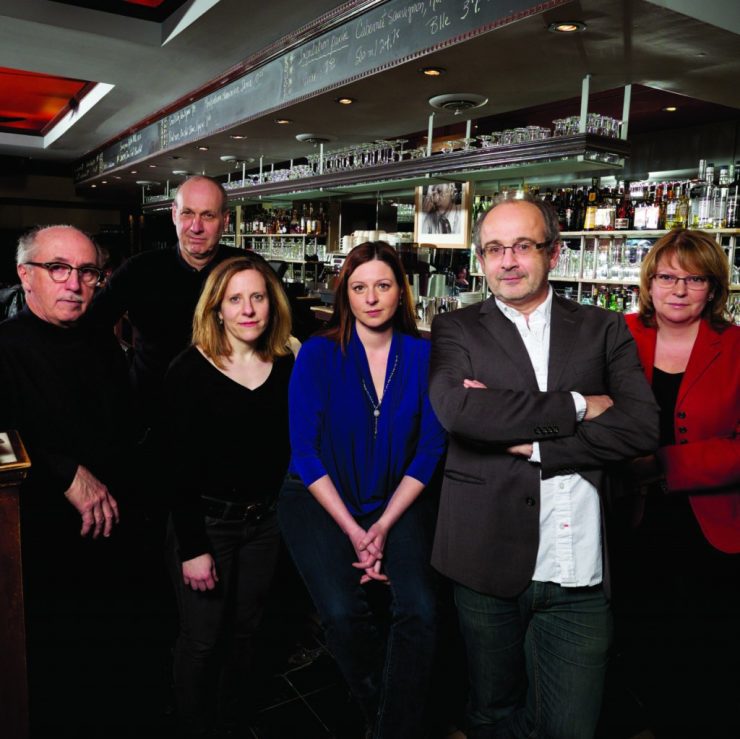 In a story about corruption, a hopeful tale about investigative journalism

“Breaking Bad” is the story of six Montreal journalists whose investigations fuelled public discontent and forced the Quebec government to create a public inquiry looking into corruption.

Before I started working on this feature, I was somewhat familiar with the work of these journalists and the intricacies of the Charbonneau Commission—after all, I’d lived in Montreal while these stories were unfolding. But as I met with these journalists, I began to realize the complexity and overwhelming depth to this story. This was my opportunity to share their work with an audience outside of Quebec, and I was surprised to discover how little other journalists actually knew about the behind-the-scenes events that led to the creation of the Charbonneau Commission.

My reporting process was full of late-night bus rides to Montreal to meet with my sources. I learned how to be productive during those six-hour trips; by the end of October I was actually transcribing interviews or writing parts of my feature on the bus. I also interviewed many of my sources in French, which was something I had never done for a piece this long. Being able to understand the articles and news stories in their original language proved to be invaluable in writing this piece and helped me get specific details from my sources.

While journalism continues to experience challenging times, this is a story of praise, reaffirming that good investigative journalism can indeed lead to change.

November 25, 2008. Light rain drizzled over the city as Marie-Maude Denis walked along Amherst Street from CBC/Radio-Canada’s offices in southeast Montreal. She had a 10 a.m. meeting with a source at Pouding Café, a neighbourhood coffee shop. Her boss, Pierre Tourangeau, had suggested she talk to this contact, someone he relied on during the Gomery Commission’s investigation into the federal sponsorship scandal in 2005.

Denis was an ambitious television crime reporter, a go-getter with a strong work ethic that impressed her superiors at Radio-Canada. A few days before this meeting, the then-27-year-old had received a brown envelope from a confidential law enforcement source. The tip mapped out long-standing collusion linking construction entrepreneurs and union bosses to high-profile municipal and provincial politicians throughout Quebec, prompting her to meet with this new source at the café. The evidence focused primarily on Laval, a city north of Montreal.

At the time, Denis knew little about the Quebec construction industry, or the cast of characters her source was rambling on about at the coffee shop. But she learned a lot as he shared his intimate knowledge of the systemic corruption that had gripped much of Quebec for the previous decade. The people involved included Tony Accurso, one of the city’s most prominent construction entrepreneurs.

Back at her newsroom cubicle, Denis asked her colleague, Christian Latreille, for advice on how to handle the information. Latreille recommended she share it with Radio-Canada’s newly revamped investigative unit. He urged Denis to contact Monique Dumont, a senior researcher known for her interest in the Laval corruption dossier. Denis walked down to Radio-Canada’s current affairs department on the building’s ground level. She knocked on Dumont’s door and introduced herself. They walked over to a glass-enclosed conference room, where Denis watched as Dumont’s eyes widened; then she began running around the office, screaming, “I’ve got my smoking gun! I’ve got my smoking gun!”

Since Denis took that smoking gun to her colleagues at Enquête in 2008, Montreal reporters have successfully exposed deep-rooted corruption, in what has been hailed as a golden moment for Canadian journalism. By 2009, the investigations began to snowball and over the many years it took to reveal the whole stunning story, several Montreal journalists became involved—including Denis and Alain Gravel at Radio-Canada, André Noël and André Cédilot at La Presse, Kathleen Lévesque at Le Devoir, Linda Gyulai at The Gazette and Fabrice De Pierrebourg at RueFrontenac.com, the news site launched by locked-out Le Journal de Montréal employees in 2009. They were competitive, but they built on each other’s stories. Although many received defamation suits from people they were investigating, they persevered.

“We’ve been part of the solution regarding the fight against corruption and crime,” says Brian Myles, a reporter at Le Devoir and former vice-president of the Quebec Federation of Professional Journalists. He and his colleagues have every right to be proud: their exemplary, old-fashioned reporting and the astonishing results—cemented by the creation of the Charbonneau Commission in 2012—reaffirmed that investigative journalism can lead to change. “The real work, and the part that people don’t realize,” says Les Perreaux, a Quebec correspondent for The Globe and Mail, “is the story that comes the day after the big scoop.”

To read the rest of “Breaking Bad,” please go to the Ryerson Review of Journalism’s website, where it was originally published.