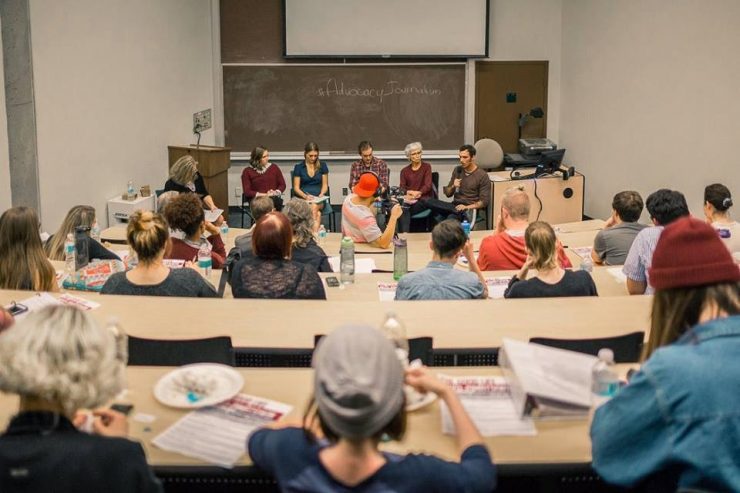 Is there a line between advocacy and journalism?

Covering oppositional topics should not be labeled as advocacy journalism, according to Emma Gilchrist, executive director at DeSmog Canada, a non-profit online news blog that seeks to cut through public relations “pollution” and focus on clear storytelling about important issues.

Journalists always have been advocates, she said while on a panel about advocacy journalism at Mount Royal University, in Calgary, on Sept 30.

Gilchrist, who was joined on the panel by four other Mount Royal University journalism alumni,

compared the way the tobacco industry hired scientists to say that cigarettes don’t cause cancer to the tactics used today when the fossil fuel industry spends millions of dollars to “create confusion of climate science.”

Other panelists echoed the view that journalists don’t need to wear their advocacy hats to report on the less popular side of a story.

Kyle Napier, the Cree Language Manager for the Northwest Territories, self-identifies as an advocate. But he said his role is to step back so others can have their voices heard. “It’s not for me to speak through the megaphone, but to be the megaphone,” he said.

Laura Wershler, a women’s health advocate and writer who has reported on abortion, said it’s important to get the stories that aren’t being told out. “It’s time to create some equal space for other points of view,” she said.

When moderator Shauna Snow-Capparelli, an associate professor in MRU’s journalism program, asked the panel where the line sits between advocacy journalism and non-biased, objective journalism, freelancer James Wilt said he didn’t think there is such a thing as true objectivity because it gets obscured with the tendency of journalists only to select stories and sources that uphold their values. “[It becomes] like an echo chamber where you only engage those who think alike.”

Though Katie Turner now works for Calgary Mayor Naheed Nenshi, she used to work at Metro Calgary, where she would frequently hear from advocates for various issues. “In [that] role I felt like I was acting as a conduit to charities.” She also said there is a lack of empathy in society, so putting yourself in other people’s shoes can be effective way to get a story.

Finding your niche or interest in the reporting world is key to making positive change, the panel agreed, whether you label it advocacy or not.