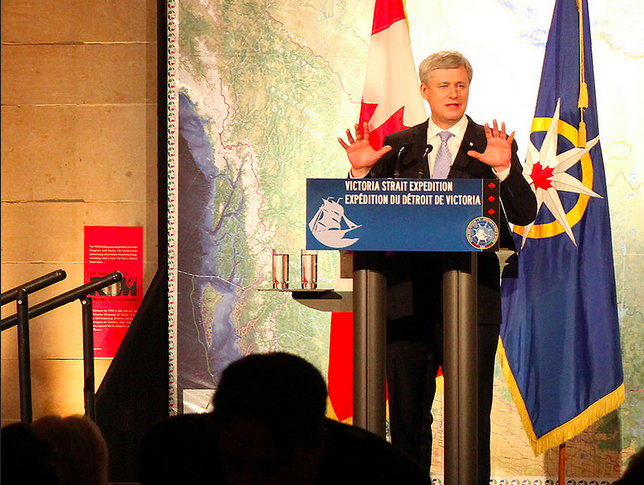 John Geiger says group had no control over Franklin documentary

Geographical Society CEO says his organization had no editorial control over a documentary that is back in the spotlight after Paul Watson’s resignation from the Toronto Star.

The CEO of the Royal Canadian Geographical Society says his organization had no editorial control over a Franklin expedition documentary that has been put back in the spotlight by the resignation of reporter Paul Watson from the Toronto Star.

In a statement late Thursday to The Canadian Press, John Geiger said issues had been raised with the accuracy of the documentary broadcast in April.

“We saw it for the first time when it aired on CBC just like the rest of the viewing public,” Geiger said.

“I believe any concerns or comments are best directed to the filmmakers.”

On Wednesday, Watson said he quit the country’s largest newspaper so he could get the truth out about last year’s successful search for Sir John Franklin’s lost ships in the Canadian Arctic.

In an interview on the Canadaland website, Watson cited a letter from former Research in Motion CEO Jim Balsillie, whose Arctic Research Foundation was instrumental in the search. Balsillie had reportedly raised concerns with the environment minister about the documentary.

A spokesman said this week that Balsillie, who had no comment, had expressed concerns about the Franklin project to “relevant partners” privately over the last few months.

“At the moment, we are just waiting to hear what’s next on the Paul Watson story,” said Neve Peric. “Stunned to learn about his resignation.”

Watson announced on his blog he had submitted his resignation at a meeting Tuesday in Vancouver with Star editors over its “refusal to publish a story of significant public interest,” an allegation the newspaper denied.

“My reporting is an attempt to give voice to federal civil servants and others involved in the gruelling, High Arctic search for British Royal Navy explorer Sir John Franklin’s lost ships, HMS Erebus and HMS Terror,” Watson wrote.

“For months, these individuals have been angry at what they consider distorted and inaccurate accounts of last fall’s historic discovery of Erebus in the frigid waters of eastern Queen Maud Gulf.”

Watson has raised allegations that Geiger, who he called a “peripheral” member of the expedition with access to Prime Minister Stephen Harper’s office and editors at the Star, was the source of those accounts.

Geiger did not directly respond to those allegations. However, he said there appears to be a “fundamental difference” between Watson and the Star.

“I think it most appropriate for them to work out those differences directly,” Geiger said, adding he would have no further comment.

For its part, the Star denied suppressing any story in the public interest and called Watson’s allegations “odd.”

CBC spokesman Chuck Thompson, in a statement to the CBC program “As It Happens,” said the Canadian-U.K. co-production that aired on “The Nature of Things” was accurate.

“We are confident the documentary is factually sound,” said Thompson.

Gordon Henderson, the executive producer of “Franklin’s Lost Ships”, said Balsillie’s letter was “much ado about nothing…people jockeying for position … (who) want credit,” reported “As It Happens.”

Harper himself announced last year that the Canadian search team found the wreck of one of two lost ships from Franklin’s doomed 1845 expedition to find a Northwest Passage. A few weeks later, Harper personally announced the ship was HMS Erebus.

The Conservatives have made Arctic sovereignty a key theme since coming to power in 2006. Harper said last year the Franklin search was part and parcel of asserting Canada’s control over its North.

This article is reprinted from The Canadian Press, with permission.