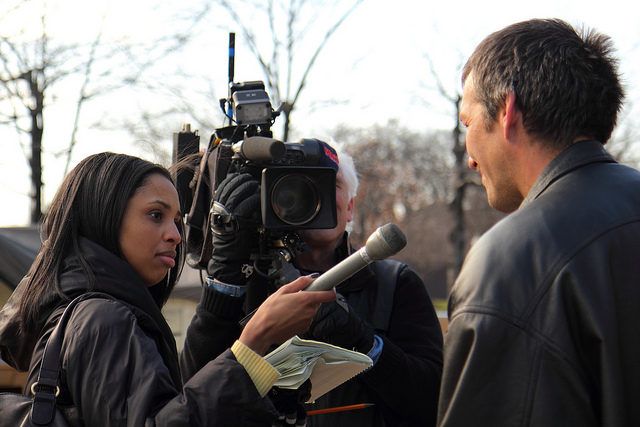 It probably wasn’t the point he wanted to make, but Globe and Mail sportswriter Cathal Kelly set out the definitive argument for keeping a studied distance between journalists and the people they write about.

Kelly was reacting to a rant by Toronto Maple Leaf player Phil Kessel about how unfairly the media has been treating the team’s captain Dion Phaneuf.

Maybe that’s true, Kelly wrote. But the players don’t treat the reporters like people. If the athletes were nicer, learned journalists’ names, pretended to be interested in them, then the coverage would be kinder too.

Chat with a reporter in a coffee shop lineup or schmooze in the dressing room, and everything changes.

”Once that’s happened, you’ll never rip that guy in print,” Kelly writes. ”You’ll criticize, but the ripping days are over. He’s not just someone you cover any more. He’s someone you know.”

It was a weird piece. Readers think journalists are doing a professional job of covering sports or business or politics. They don’t expect a few fake pleasantries from the subject—or their absence—determines what and how the journalist writes.

Kelly’s admission that he knows he gives special treatment to pro athletes who pretend to like him is, at least, honest.

And even for journalists who aren’t that blatant in shaping their reporting, the issue is real.

If you like a politician or businessperson you’re covering, there is always a risk that will affect your coverage. The bias might not even be conscious, but it will be there. Just as there is a risk you will report differently on someone you have discovered to be a creep.

Political journalists, business writers, anybody working a beat ends up talking to the same people a lot. A lot of them—well, maybe not the athletes—have turned charm into a career asset. And they know that real or feigned interest in the opinions of a journalist or shared bits of gossip can build a relationship that pays benefits.

As the Lester Bangs character warns a young music writer travelling with a band in the movie Almost Famous, ”Friendship is the booze they feed you. They want you to get drunk on feeling like you belong.”

Kelly thinks that’s OK, and more athletes should pretend to be interested in reporters.

Really, his article is a reminder that journalists should work hard to stay distant from the people they cover.

I always knew that. But a defining moment at a B.C. press gallery dinner soon after I began writing about provincial politics and policy reminded me of the importance of distance.

I grabbed my plate of food and found myself sitting beside an NDP cabinet minister who was doing a lousy job. I had written critically on her ministry’s failures.

But over perogies and overcooked roast beef, she talked about missing her Wednesday night bowling league and hometown friends and the pressure of her job.

I was in danger of knowing her and feeling sorry for her, and of having that knowledge influence—even unconsciously—my coverage of her ministry.

I quit going to the annual press gallery dinners and skit nights. An off-the-record night shared by journalists and politicians strikes me as inappropriate, even if it is benign.

Kelly’s world of journalism is wrong and delusional. Who cares if the hockey players pretend to be your friends? Some are nice guys, some are jerks. That doesn’t affect the reality of their on-ice performance. And isn’t that what a sports reporter is supposed to be writing about? Not whether the muscled multi-millionaires are friendly and call him by his first name.

The Canadian Association of Journalists ethics committee wrestled with the issue last year and produced a report, How Close is Too Close?

But it never really answered the question. And there were lots of journalists who defended the practise of becoming friends with the people you write about. J-source.ca quoted Graeme Smith, who covered the Afghan war for The Globe and Mail. “I think you’re always trying to get as close as you can to your subjects,” he said.

But Smith also acknowledged he had become ”very attached” to a Canadian platoon while embedded during the war and he felt ”super cool” when he was accepted into the group. And because of that, Smith acknowledges, he didn’t report events that might have made the platoon look bad.

Some journalists argue that getting close to the people you cover pays off. You get insight into their way of thinking, and occasional leaks, the inside stuff.

But business people and politicians are focused and good at what they do. If they leak information, it is strategic, designed to advance their interests or harm an opponent. And who is really benefitting from the relationship—the reporter who gets the information, or the source who takes advantage of friendship to advance his or her interests? Mike Duffy’s chumminess with the powerful did more to advance their interests, and his, than it did to allow public-interest journalism.

Keeping a distance can be difficult, especially in company towns like Ottawa and Victoria. Social circles overlap, and the partners of journalists might well work for government. (Another issue that deserves more thought and discussion, especially around disclosure.)

I’m friendly and polite with everyone I write about (almost always). But we aren’t friends. I don’t want to know enough to like them, or dislike them. I don’t care to understand their motives.

Because Kelly is, on one level, right. The way journalists feel about people can affect their coverage, even if they are not aware of the bias.

And the best way to avoid that is to keep your distance.