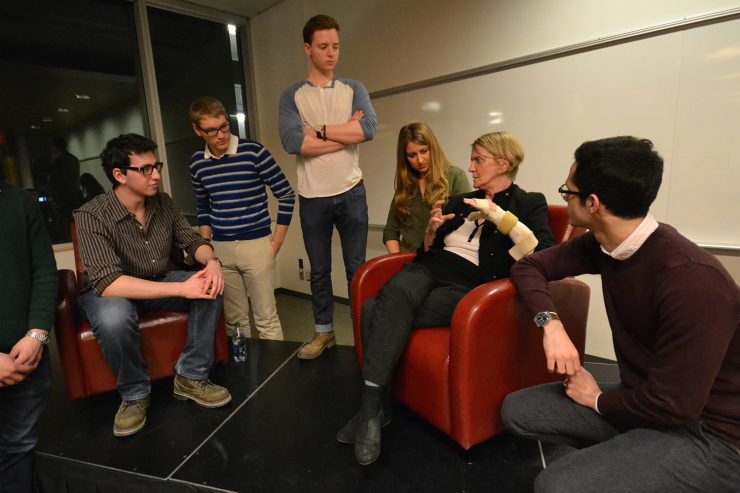 Gannon spoke in Ottawa about her career as a foreign correspondent for the Associated Press.

One by one, young journalists stepped forward from the crowd surrounding Canadian-born war correspondent Kathy Gannon. They asked questions about ethics, about embeds, about everything a war correspondent might face in the field.

She invited the students to sit with her in some nearby chairs. Someone brought Gannon a glass of wine from the reception area, which she took in her right hand. Her left, bandaged and in a brace, waved animatedly as she talked.

“You’re a hero!” she called after the man who delivered the wine, turning back to the students waiting expectantly on her next answer.

Gannon had just wrapped up “Surviving Afghanistan,” a conversation about the attack that nearly killed her, and claimed the life of Pulitzer Prize-winning photographer Anja Niedringhaus (you can recap J-Source’s live blog of the event here). Gannon was the Associated Press bureau chief working in Afghanistan when she was wounded in an unprovoked shooting last spring. She was shot six times, leaving her lung punctured and her left hand nearly severed.

Gannon told the harrowing story of that day, and other anecdotes from her remarkable career, to host Dick Gordon and several hundred people packed into a conference room at Carleton University on Tuesday night.

“For me to speak to young aspiring journalists and students was more about hearing what they had to say and what their take is on our profession,” said Gannon in an interview following the event.

After more than two decades of experience, her message to students and aspiring journalists is clear: work hard at home before going abroad.

“To hone those skills, you have to do things that are often very mundane,” she said. “Like covering city council, like covering the local police or board of education.”

During the talk, Gannon recalled her early career as a journalist in western Canada working on local stories for publications like the Kelowna Courier, where she was once a city editor.

“It’s all very important in terms of giving you a foundation that when you get into a conflict situation, you have those skills already,” said Gannon. “You can question the woman hiding in a burnt-out building trying to figure out how she’s going to feed the eight children she has crawling around.”

Gannon did interviews of this nature and countless others over more than two decades serving as a foreign correspondent in Afghanistan and Pakistan.

Over the nearly two-hour conversation with Gordon, she discussed—at lighting speed—everything from the political views of her longtime fixer to a detailed account of unknowingly walking through an active minefield in 1986.

Despite the attack that forced her out of work and into a long recovery, Gannon has no doubts about returning to Afghanistan.

“It’s not possible that I will let some crazy gunman dictate my future, or when I decide to leave covering Afghanistan or leave reporting,” said Gannon. “I’ll go back, and I’ll go back working with Associated Press.”

“I don’t want the shooting to define me,” said Gannon. “I know Anja—if the roles were reversed and I had died, she would be back in a heartbeat, as soon as she could. She would not give in to something like this.”

Kelly Hobson is a first-year master of journalism student at Carleton University in Ottawa. She has freelanced for the Ottawa Citizen, Toronto Star and CNN.