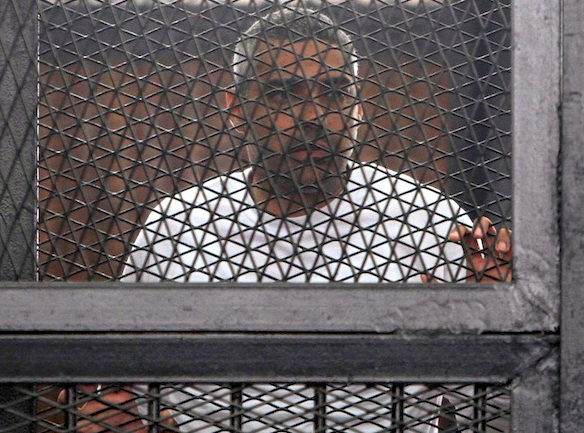 Al Jazeera English Egypt producer Mohamed Fahmy has been arbitrarily detained since December 29, 2013, along with his colleagues Peter Greste and Baher Mohamed. The letter below was smuggled out of Tora prison by Fahmy’s brothers to mark World Press Freedom Day (May 3). It also coincides with Fahmy being awarded the 2014 Canadian Committee for World Press Freedom Award.

Al Jazeera journalist Mohamed Fahmy, a Canadian-Egyptian national, stands in a metal cage during his trial in a court in Cairo March 24, 2014. Photo courtesy of Reuters/ Youm Al Saabi Newspaper.

Al Jazeera English Egypt producer Mohamed Fahmy has been arbitrarily detained since December 29, 2013, along with his colleagues Peter Greste and Baher Mohamed. The letter below was smuggled out of Tora prison by Fahmy’s brothers to mark World Press Freedom Day (May 3). It also coincides with Fahmy being awarded the 2014 Canadian Committee for World Press Freedom Award.

Greetings to the champions advocating for the freedom of the press.

I write you this letter on World Press Freedom Day from my cell after 126 days of incarceration for doing nothing more than the job I love. This life-changing experience has become much more inspiring and as valuable to me as covering revolutions and frontlines during wars in my 13 years working the Middle East and North Africa.

When the journalist becomes the story rather than reporting it, you ask yourself why this happened and who is responsible for detaining you in the terrorism wing of Egypt’s most notorious prison. To silence me and my colleagues on the pretext that we are a threat to national security and members of a terrorist organization is a sheer insult to the intelligence of Egyptian people and the democracy promoted in the newly ratified constitution.

I hereby appeal to the global advocates of press freedom not to hold Egypt, the country of my birth responsible for our wrongful detention. Only certain individuals in the system who lack the understanding of the fundamentals of journalism are to be held accountable. One way to reverse this misunderstanding is to start with the man next to you, and in my case that would be the illiterate prison guard convinced that by broadcasting protests in Egypt to the Western world simply makes me a traitor. His more educated disgruntled boss who has prevented me from having a pen and paper in my cell has become more lenient by time when I continuously highlighted certain values of journalism like transparency and the importance of having a watchdog to question the government that pays his salary and evaluates his performance. The metamorphosis has begun and the fact that this letter has been released from prison and published is in itself a victory to be celebrated and hopefully not the last.

During the previous court hearing, I stood provoked in the cage as I watched the all too familiar press pack being expelled from court. One diligent reporter yelled a question to me on his way out. “Are the hunger strikes real?” Yes the dozens of prisoners enduring weeks of genuine life-threatening hunger strikes are noble men who have no other way to contest the ill treatment they face in prison. I have witnessed their resilience and watched their bodies deteriorate. Among those freedom fighters is Abdullah Al-Shamy, the Aljazeera Arabic correspondent who has been on hunger strike for weeks and lost more than 30 kilograms. His detention for almost 9 months without even standing trial is a breach of human rights.

I see no better occasion than today to remind the world about the plight of these men and that there are dozens of respected local Egyptian reporters and citizen journalists who are suffering in prison awaiting trial. They are simply prisoners of conscience!

I would like to express my sincere gratitude to the Canadian government and my fellow Canadian citizens and colleagues for their precious support. Snippets of news we get in prison about global marches, vigils, and Twitter hash-tags drawings thousands of people calling for our release has raised our morale immensely. Its surreal and humbling to learn that competitive networks like CNN, BBC, and Aljazeera English, are sharing resources, information, and the expertise of their best reporters, many of whom are my mentors, to press relentlessly for our release. Prison is designed to control prisoners and eradicate your individuality. If one allows oneself to become cynical and scarred behind bars, then the jailer has won. At times in my dingy cell, my mind wondered about iconic journalists who have left a mark on me after interacting with them in the field. Legends like the late Anthony Shadid and Marie Colvin have lost their lives during the Arab Spring for the sake of journalism as they faced governments who also exerted all their powers to suppress their voice. May their souls always rest in peace.

I respect the esteemed judge handling our case and I believe he is coming to terms with what journalists do for a living. I am sure he was not aware that the date he set for today’s hearing coincides with World Press Freedom Day. I intend to inform him in court and demand our release like I do at every hearing, but this time I will remind him that the world will be watching closely.

This letter was originally published on the Canadian Journalists for Free Expression website.