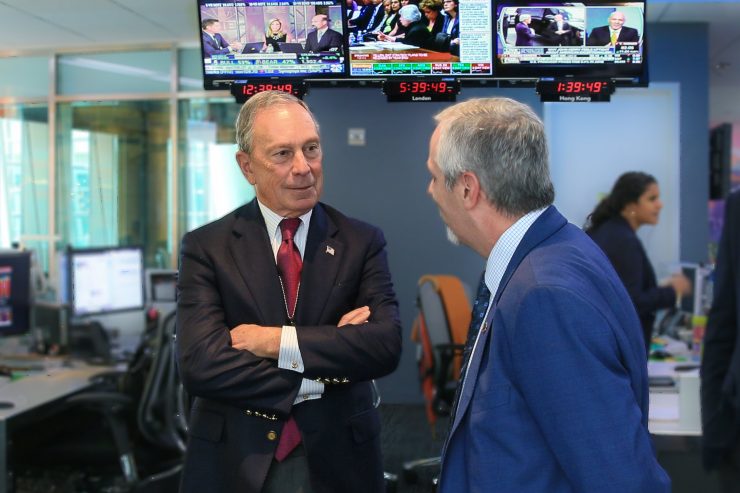 On Feb. 25, The Globe and Mail and Financial Post reported on plans Bloomberg LP had underway to launch a Canadian version of its television channel.

On Feb. 25, The Globe and Mail and Financial Post reported on plans Bloomberg LP had underway to launch a Canadian version of its television channel. In partnership with independent Canadian media company Channel Zero, the new venture would be set to produce about 35 per cent original Canadian content by its mid-2015 launch in addition to broadcasting U.S. and international content from Bloomberg Television’s other outlets.

We spoke with Bloomberg Canada managing editor David Scanlan about plans for the partner-produced channel, what will set it apart from its one main competitor and what the world is interested in when it comes to Canadian business news.

J-Source: What will your involvement be in setting up Bloomberg TV Canada and its future operations?

Scanlan: I’m the managing editor of Bloomberg News in Canada, and that’s a print operation. So I’m working with my TV colleges in New York, as well as our new partners at Channel Zero, to build a team that will run Bloomberg TV Canada.

J-Source: Can you tell us anything about the team that will be hired?

Scanlan: We have to hire on-air talent, reporters, producers, but the exact number we’re not releasing because it’s early days.

The team that’s in place right now across Canada’s bureaus are print reporters, but they can contribute in a couple of ways. For one thing, the stories they write for the Bloomberg terminal can now be used on air. Our reporters break business news all across the country, and now we have a new outlet to distribute that.

At the same time, these reporters can go on air and do updates and just talk about their stories. So if the budget’s released in Ottawa, we can get an Ottawa reporter in front of the camera to talk about how much taxes are going up by, here’s what the budgets are like, that kind of thing.

J-Source: The last time J-Source spoke to you at length was almost exactly a year ago, when Ed Greenspon was hired as editor-at-large. At the time, the piece noted that there was significant growth on Bloomberg Canada’s part, but a lot of work was cut out for the operation as well. Aside from the launch of a TV channel, what’s changed in a year?

Scanlan: TV’s been our big focus, and obviously we’re really excited to get that launched. And we continue to look to expand. I’m hoping that we can add to our print head count.

But otherwise we’ve just been integrating the growth that we’ve been seeing over the last couple of years. That includes additional people at our Ottawa bureau, additional people in Winnipeg and in Calgary. So it’s not a radical departure from a year ago. TV is obviously a really big step for us, and it really complements what we’re already doing.

J-Source: Are there any concrete plans to add to the print reporting team?

Scanlan: That’s our expectation. Nothing firm yet, but we hope to continue the growth we’ve seen over the last couple of years.

J-Source: What might be some difficulties in establishing a TV channel in an environment where Business News Network has been the sole player for some time?

Scanlan: BNN is obviously the entrenched player, but we think there’s lot of room for competition here. One of the things we can do to distinguish ourselves is that we’re much more global.

At the same time we can deliver Canadian news to the world. So if we have guests, whether they’re company executives, or analysts or fund managers who want to get on TV, they know that with Bloomberg, not only are they speaking to the Canadian market, but to the global market as well. We think that’s very powerful.

J-Source: What are some of the Canadian business stories in which global audiences are interested?

There’s stories like the Keystone Pipeline, which has made headlines for years. It’s an interesting story that touches on a Canadian company—TransCanada—but it also has all kinds of environmental implications because of the development of the oil sands. It’s also a political story because there’s a tension between what Canada wants and the U.S. wants, and it continues to be stalled. And Bloomberg TV now can deliver that story from Washington, New York, and now from Calgary and Toronto, because there’s players in all of those cities.

J-Source: International outlets of Bloomberg TV seem to have made a shift. Individual European channels such as Germany, France, Italy and Spain have closed to make way for a Europe-wide bureau in London. Since then, we’ve seen individual bureaus pop up in Indonesia, Australia, and Africa. What does this tell us about global business news interests?

Scanlan: I think it shows that there are a lot of new markets of interest to us. We’re in Mexico, for example, and in Indonesia. These are markets you wouldn’t typically think we’d be interested in, but we have a very strong local interest in business news in Mexico and Indonesia—but there’s also a very strong global interest in stories from there.

For television, these kinds of joint ventures are becoming more common for us, and now Canada is just the latest. It’s a great way to expand our television, working with a local partner, because they have local knowledge and infrastructure. In our case, Channel Zero has the studios to do the editing, mixing and camerawork. And what we bring, of course, is the business experience and expertise.