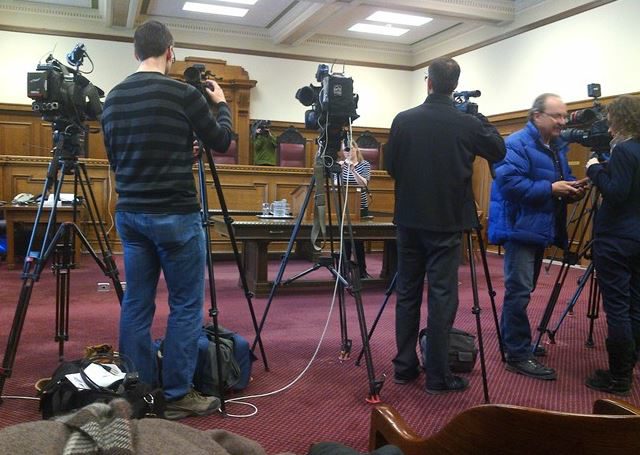 While cameras have been allowed in Appeal Court and in certain cases in other provinces, this is thought to be the first time a province has designated courtrooms where proceedings can be broadcast automatically. All matters before the Manitoba Court of Appeal can also be broadcast unless a strong case is made against it.

Cameras line up in Winnipeg on Tuesday, April 15, 2014 to hear Manitoba judges announce a pilot project to allow cameras in courtrooms. Photo courtesy of Chinta Puxley for the Canadian Press.

By Chinta Puxley, for The Canadian Press

Manitoba's top judges are designating courtrooms where video cameras will be allowed to record — a move they say is unique in Canada.

Chief Justice Glenn Joyal with the Court of Queen's Bench said lawyers are welcome to argue against having a TV camera in those courtrooms, but the assumption is that they are allowed. This marks a huge shift in Manitoba where hand-held cameras have never been allowed past security.

"We're terribly excited by this," Joyal said Tuesday. "This is the first meaningful, collective initiative by all three levels of court … which stipulates that there is a presumption in favour of broadcasting that one court."

While cameras have been allowed in Appeal Court and in certain cases in other provinces, this is thought to be the first time a province has designated courtrooms where proceedings can be broadcast automatically. All matters before the Manitoba Court of Appeal can also be broadcast unless a strong case is made against it.

As part of a pilot project, TV cameras will be allowed to broadcast a murder trial verdict for the first time Wednesday. Cameras will also be allowed into the Court of Appeal at the end of the month for the case of a man found guilty of killing his parents and brother.

"We don't envision that any time soon," Joyal said.

Provincial court Chief Judge Ken Champagne said judges had to strike a "delicate balance" between openness and protecting the safety and security of lawyers, witnesses and children.

"But we also recognized that perhaps the judiciary could do something more," Champagne said.

Manitoba justice officials have been grappling with camera access since 2008 when they formed a committee to discuss the idea and come up with recommendations. While some argue allowing TV cameras make courts more transparent, others say they have a chilling effect on witnesses and could actually impede the justice system.

Chief Justice Richard Chartier of Manitoba's Court of Appeal said ultimately the justices felt courts must be more open to the public.

"This principle is a hallmark of a democratic society and has long been recognized as a cornerstone of the common law. So says the Supreme Court of Canada. So say we," Chartier said. "Justice must not only be done. It must be seen to be done."

This is a "baby step" but an important one, he added.

"A lot of people are anxious about what's happening here today," Chartier said. "The judges, there is a certain level of anxiety about what's going to happen. At the end of the day, we want to make sure … the administration of justice occurs, that it doesn't fall in disrepute and individuals get their fair trial."

Josh Weinstein with the Canadian Bar Association said no one has a problem with Court of Appeal proceedings being broadcast or even other proceedings where the camera is simply fixed on the judge rendering a decision.

But he said there are too many risks in allowing cameras to broadcast witness testimony, family court proceedings or refugee hearings.

Witnesses might be afraid to testify if they know they will end up on television, Weinstein said. The lives of refugees and their families in their home countries may be put at risk by having their picture broadcast, he said. Lawyers and judges may get recognized in their local grocery store and their security could be put at risk, he said.

"What we see now is only the beginning of what's being proposed," said Weinstein, a Winnipeg criminal defence lawyer. "I would have very significant concerns with cameras focused on some of the justice system participants."

Ontario started televising cases from its Court of Appeal in 2007. Provinces such as British Columbia and Nova Scotia allow cameras in some courtrooms with prior permission of the court.

In Newfoundland and Labrador, cameras are allowed into a courtroom up to the time the judge enters. In 2011, the Supreme Court upheld a Quebec court regulation that restricts cameras to designated areas of the courthouse.

Supreme Court of Canada proceedings are televised and dozens of Canadian public inquiries have been broadcast.

This article was originally published on Canadian Press and reprinted here with its permission.