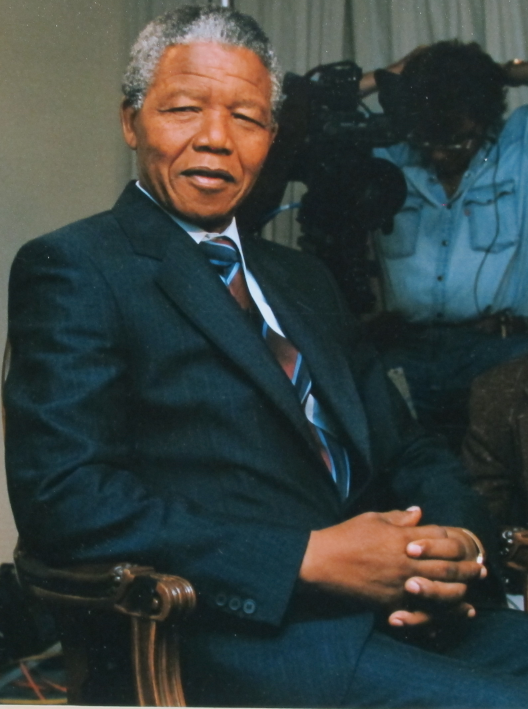 My morning with Nelson Mandela

Many journalists have worked on a Nelson Mandela story, far fewer are lucky enough to have met him. Michael Smith shares his personal brush with greatness, and describes how Mandela left an impression that will last a lifetime.

Many journalists have worked on a Nelson Mandela story, far fewer are lucky enough to have met him. Michael Smith (left) shares his personal brush with greatness, and describes how Mandela left an impression that will last a lifetime.

These past few days, world leaders and celebrities have eulogized Nelson Mandela because of his fortitude, his righteousness, his struggle, and his achievements. However, I feel his impact will be emotionally much deeper and valued by the people who met him, who shared his laugh and his beautiful smile.

I was one of the fortunate who had this experience.

The occasion was on his visit to Canada just five months after his release from his imprisonment of 27 years. He agreed to be interviewed by the host of the program I directed at the time, The Journal with Barbara Frum.

This would be the second interview that Barbara did with Mr. Mandela. The first was just a day after his walk to freedom on February 11, 1990.

As I remember that day, I recall the emotion I experienced when I saw him on the satellite feed. CBC News was covering the worldwide event from Toronto and I was choked upon seeing him. A strange reaction to a man I knew of but a little.

To convenience his overloaded schedule, the interview would be conducted in a suite in his hotel. We were all set and waiting—anxious to respect his schedule and not let anything go wrong.

Finally, his entourage was announced and leading the group was his then wife, Winnie. She in front, Nelson just behind as they walked down the corridor.

Welcome greetings were exchanged, Winnie surveyed all was in order and then announced something similar to “Well, all is good here. I’m off shopping!” Nelson laughed lightly and said, “It’s a woman’s duty.” I thought how kind, such a natural and loving thing to say.

Before we began, he agreed to anything we asked, took directions easily and permitted those with personal cameras to take pictures with him. He wore his celebrity with ease and without pretension.

Barbara finished her briefing and came to greet him. Mr. Mandela addressed her warmly by name and the interview went very smoothly. What happened next was the most memorable.

While his handlers were prompting him to hurry to the next event, Mandela disregarded them and, after thanking Barbara, he shook every member of the technical team’s hand and said what a pleasure it had been to be there with us that morning.

That gesture was more than a politician’s politicking.

To me it was the example of a man who knew what it would mean to each and every one of us. A simple, courteous handshake out of mutual respect—a simple thing, but I’ll never forget it.

Michael Smith spent the majority of his career in broadcasting as director of two of this country’s most influential television journalism programs. From 1984-1991 he was the director of CBC’s The Journal with Barbara Frum; and from 2001-2012 he worked at TVO directing Studio 2 and The Agenda with Steve Paikin. His proud accomplishments include The Free Trade Debates (1988 Federal election); The Journal in Moscow (1989); Referendum ’92; Election ’93; and numerous live Special Events as director for CTV, CBC, Global, TVO. He lives in Toronto.