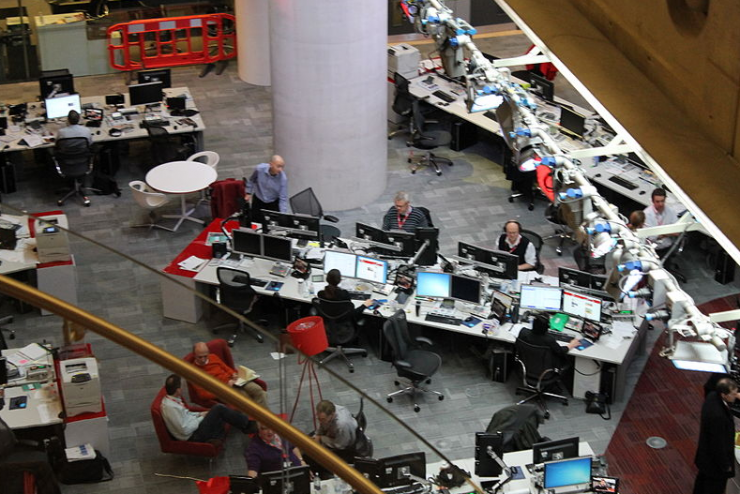 A recent report published by The Open Society Foundations gives an overview of how Canadian media are faring in the digital landscape, including the impact digitization has had on journalists and newsrooms.

A recent report published by The Open Society Foundations gives an overview of how Canadian media are faring in the digital landscape, including the impact it has had on journalists and newsrooms.

The Open Society Foundations is a non-profit organization and grantmaking operation that aims to shape public policy in the areas of democratic governance, human rights and social reform. Assembled by eight researchers from universities across the country, the larger Mapping Digital Media project takes an in-depth look at the opportunities and risks created by the transition from traditional media to digital. The project, currently covers 60 countries around the world.

The authors note that in Canada, progress has been exemplary in many areas of digitization, especially in how the country has tackled the complexities of its sheer geographic size.

It emphasizes, however, that Canada is behind in adopting an official strategy at the federal level, similar to the EU’s Digital Agenda for Europe or the National Broadband Plan in the United States.

“It is essential that the federal government tables a cohesive and comprehensive Digital Economy Strategy in consultation with all stakeholders, including the public,” the report states. “Such a unified, forward-thinking approach is needed if Canada is to forge a comprehensive and progressive agenda for the continued development of digital media infrastructure, services, and access.”

A large section of the report looks at how digitization has affected journalists and newsrooms and it was informed by the individual research of PhD candidate Derek Antoine and Banting Fellow Rena Bivens at the School of Journalism at Carleton University in Ottawa. Their findings show there are still some gaps in how digital is informing the news production process.

“Certainly there are gaps in areas like social media, for example, where there’s an understanding from those in the newsroom of the need to be engaged without really understanding what that means,” Antoine said in an email to J-Source. “To put it differently, many are treating social media as extensions of other forms of media rather than engaging it on its own terms. They use Twitter to drive people to their other content, for example, and forget the ongoing need for reciprocal engagement between authors and consumers.”

The report also touches on some of the ethical issues that digitization has raised. For example, statement retractions or “source remorse” may become more important. Digital publishing comes with a certain amount of permanence since it is difficult to know how much of a digital piece has been copied or shared.

For investigative journalism, the study finds that digital media bring a lot of opportunities. They can be great tools for finding and interacting with sources, through social media and blogs. They have also opened up more possibilities for disseminating investigative news coverage. The authors note that “Canadians regularly consume news through social networking sites, with over half of respondents consuming a broader range of news through social networks compared with what they would otherwise consume through traditional media sources.”

Multiplatform authoring and newsroom convergence is another area that has experienced huge shifts in recent years. The report notes that journalists are now under increased pressure to take on more tasks in the same amount of time. Journalists are being asked to repurpose their work for multiple news formats.

“Here broadcast journalism is attempting to secure its audience (and its own economic survival) in the now widespread unstable environment that is a function of the new, digital horizontal media spaces that breed mass self-communication, citizen journalism, and the blurring of boundaries between professional journalists and the wider public,” the authors explain in the report.

“From some of the conversations I’ve had with executives at the CBC, I know that partnerships are an important focus of their strategic plan moving forward,” Antoine told J-Source. “Much of that will include creating and distributing multi-platform content. In one sense, I think we will see more content created by authors outside of the corporation and this can be a good thing in that a multitude of approaches, styles, perspectives, and platforms will be part of the emergent media ecosystem. At the same time, I think this puts a lot of pressure on existing in-house content creators to do more with less and making specific content fit in places where it might not be right. I think there are important opportunities but certainly a fair share of challenges as well.”

Angela MacKenzie is a freelance writer and journalist based in Montreal. Follow her @angelamarjory.