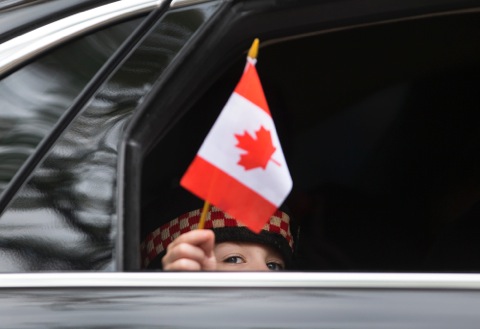 “We don’t go out and try to make this iconic image. Just an image that’s strong and impactful—how it’s received by the community is very much up to them.”

Peter Power has won four Canadian National Newspaper Awards, a Michener Award for Public Service Journalism and has been recognized by the National Press Photographers Association, News Photographers Association of Canada and others. For 25 years he worked on staff at the Toronto Star and The Globe and Mail before launching an independent career after a layoff from the Globe in 2014.  He recently took time to talk to me about photographing Cpl. Nathan Cirillo’s funeral in October 2014 and life as a freelance photojournalist.

J-Source: How did you end up photographing the funeral for Cpl. Nathan Cirillo?

Power: I was working for The Canadian Press, and between the three of us we had two working the cortège route: myself and another photographer, Frank Gunn. Nathan Denette was working inside the church. At the end of the service, Frank was in a static position on a ladder, and I was free to move—at least where I could, considering the crowds and the security perimeter around the family and the Prime Minister.

As the family was driving away in the limousines, we all anticipated that being the end of things. But there was a traffic holdup for a moment and everything stopped. It was at this point that I saw that Marcus’ window was down and there was a flag in his hand.

J-Source: What do you think this photograph says?

Power: I don’t know what that photograph says, but it was a very poignant moment. Marcus had been a very brave boy, who I’m sure will only fully understand the gravity of those events in the years to come. That family’s story had become a Canadian one, and the flag on his hand lent itself to that.

I’ve seen some writers try to talk about the meaning of a photograph, and I’ve certainly seen philosophers do similar things. I think that’s a question better asked of the people who are reading or viewing that image, and how or what they take away from it. My job, as a photographer—especially for the paper as a photojournalist—is to see what’s evolving or unfolding in front of me and just make the best visual documentation of that.

We don’t go out and try to make this iconic image. Just an image that’s strong and impactful—how it’s received by the community is very much up to them.

J-Source: That makes sense. Sometimes you just get lucky and you have that image that everyone loves, and sometimes you don’t.

Power: Sometimes you get lucky for sure. Many, many years ago, I had a photographer tell me that you make your own luck.

You do get lucky by being in a certain position, place and having something happen, but we’re also making certain choices as to where to be and when. Sometimes that comes from a conscious decision, and sometimes it just comes from following your nose and sometimes it plain old just drops in your lap. So, either way, you still have to make the image and hope that it’s well received.

J-Source: It looks like you’ve had a lot of experience working at funerals and taking similar pictures. For example, that one particular photo of Wayne Gretzky at his mother’s funeral.

Power: When I photograph a funeral I’ll try to take an image that conveys the impact on a person or community. It was my mother’s birthday—the first since her death. So I was emotional anyway. I certainly don’t cover funerals without a huge amount of empathy for the people involved. That day was especially challenging.

When celebrities are in public their emotions are very guarded, so I tried to get something when he was alone.

J-Source: What advice do you have for photojournalists and reporters working at funerals?

Power: Be human. Be respectful. Remember what that day is for. It’s important to make contact with the family or a family representative for setting ground rules while events are unfolding to minimize disruption.

J-Source: What has it been like as a freelance photojournalist?

Power: You know, I’m 49, and this old dog has to learn some new tricks. Not as much about photography, but about business and how to continue to earn money to pay my bills, etc., so it’s been a very abrupt learning curve.

I would say that for the most part, I enjoy the ability to work for different clients and clients that aren’t just editorial, but commercial and private clients as well. So there’s a certain freedom to that. But, I think you still have to get your head around every day waking up without that guaranteed income.

As everybody says, by the end of every month, things have found a way to work out. So I think that, for the most part, it’s been interesting.

This interview has been edited and condensed.

Photo by Peter Power, and reprinted here with permission from The Canadian Press.