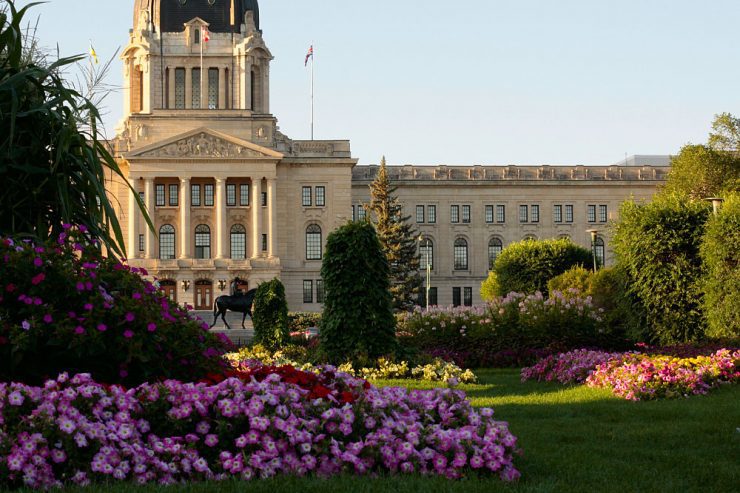 CBC reporter Stefani Langenegger, a full-time politics reporter at the legislature, was taken off the beat this year, to many people’s surprise.

Marc Spooner was shocked when he learned Stefani Langenegger would no longer being covering the Saskatchewan legislature full time.

Langenegger, a CBC reporter on the provincial politics beat, has a reputation as a dogged political reporter.

But earlier this fall, Spooner found out through social media that she wasn’t at the legislature full-time anymore. She had been moved into a different position at the CBC, a fact confirmed by J-Source with John Bertrand, CBC’s senior managing director in Manitoba and Saskatchewan.

While there are reporters who cover politics—including Mike McKinnon at Global News and Emma Graney from the Regina-Leader Post—he became concerned that that there may not be a full-time person dedicated only to covering the legislature.

Karen Briere, an agriculture and politics reporter at the Western Producer and president of the Saskatchewan Press Gallery Association, told J-Source that there are people who use the press offices in the Regina legislature building—the province’s Canadian Press reporter is based there, as is Briere and the Regina Leader-Post’s political columnist.

However, in her over 20 years working at the legislature, she’s watched as the number of reporters there daily has dwindled. Each outlet purchases a yearly membership to the press gallery for $100 (individual memberships are also available), and while all of the major media outlets still continue to renew their memberships, their reporters tend to “pop in and out” of the legislature or are there only when the government is sitting.

“There were lots of people around and now, today, for example, I'm at one end of the hall, the Leader-Post columnist is at the other end of the hall, and I don't know—maybe someone else has wandered in,” said Briere. “It’s very quiet.”

Spooner said he found the idea of not having any reporters covering the legislature full-time quite frightening. “If we don't know what's happening, it's hard to be a fully engaged citizen in a democracy, and then I'm fearful for fragile democracy itself.”

He wasn’t the only one. Spooner started a change.org petition on Oct. 26 asking CBC to resume full-time coverage of the legislature. It garnered just over 600 signatures and led to several email discussions and phone calls with CBC management, including Bertrand.

Langenegger deferred to Bertrand when J-Source requested an interview about this story.

Bertrand said the change had nothing to do with her reporting. “Stefani's a great reporter,” he said.

“The strategy is about telling the most relevant stories that we possibly can, and being as connected to the people of Saskatchewan as we possibly can be,” Bertrand explained. He said they had to look at their resources and decide how and where it was best to use their staff.

According to him, CBC Manitoba also does not have a full-time legislative reporter but still covers provincial politics. Generally, there are few beat positions at the CBC, he said, although the broadcaster’s collective agreement with the Canadian Media Guild lists “provincial affairs reporters” as one of the job bands.

In “A Space for Us All,” the CBC’s guide to its future development strategy, it notes that local coverage will evolve by offering “content specific to the needs of each region.”

“‘Importantly, it is not ‘one size fits all,’ but rather ‘what size fits best,’” the guide continues.

Since early November, Langenegger has been back at the legislature covering question period while government is in session, and according to Bertrand their political coverage will have a strong presence in Saskatchewan in 2016, an election year for the province.

thanks to all the reporters for helping us stay informed and for helping to keep our democracy healthy! https://t.co/a4evTvkmhS

“I appreciate that the petition was a show of support for the legislative reporting,” said Bertrand. “It was certainly a passionate plea for public broadcasting and for the work that Stefani had been doing.”

Spooner is pleased with the impact he believes his petition had. “I think it was effective,” he said. “And I think probably management themselves were maybe a little surprised how people did respond.”