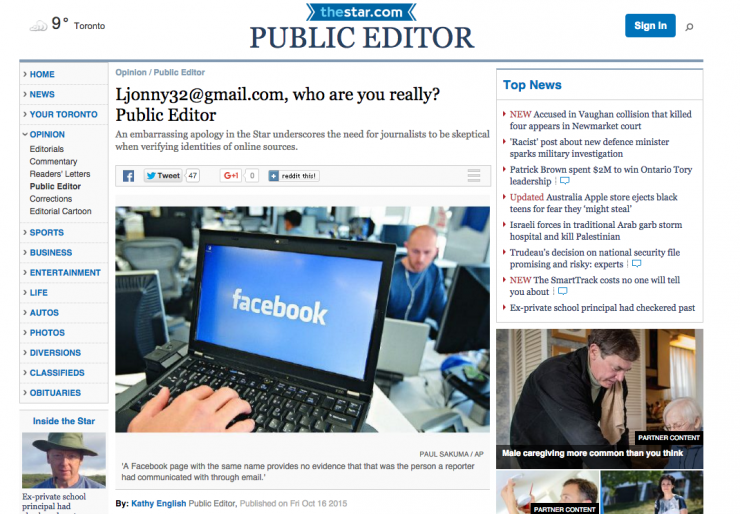 Should Star intern take the brunt of blame when a mistake is made?

A recent Toronto Star public editor’s column noted that an intern didn’t take proper steps to verify a source—but should blame have been shouldered by multiple parties?

It was the correction that first caught people’s attention.

The Toronto Star published an apology to Alex Shivraj on Oct. 13, more than a month after “statements about finding places for car sex and other activities” were incorrectly attributed to him.

But it was the subsequent explanation, in the form of a weekly column from the Star’s public editor, Kathy English, that explained the situation in more detail. “An intern reporter, working on her first story for the Star, was duped by what would seem to be a dishonest prankster,” English wrote.

“It seems to me there were red flags from the outset to indicate something could be amiss with the email source. A more experienced journalist may have been more skeptical and taken further steps to verify the source,” English wrote in her column. “Unfortunately, the reporter did not alert her editors to these flags—as she should have. Had she done so, I expect they would have demanded she do much more to verify the identity of her source —as she should have.”

The intern had seen a Reddit thread on car sex, pitched a story based on it to her editors, reached out to one of the thread’s commenters via email—Ljonny32@gmail.com—and interviewed him. He rebuffed her request to speak on the phone. At first, he wanted to be quoted as “butterz,” but when the intern pushed for a real name, he gave her Shivraj’s and said he was from Mississauga. She then looked up Shivraj on Facebook—the details matched and she, per English’s column, considered her source verified.

Certainly the intern made a mistake. But is it fair for the blame to be placed squarely on someone working on her first Star piece?

Some readers on Twitter were quick to suggest that editors should shoulder some of the blame. Journalist Carly Lewis even devoted some of her Oct. 29 appearance on Jesse Brown’s Canadaland podcast to critiquing English’s column, which she said made her “furious.”

“Multiple levels of editorial sloppiness at work here, but then to blame it on the intern—a young female reporter—I think is arrogant and unfair and really demeaning to this person’s credibility,” Lewis said.

“This is an intern-level reporter who has just finished journalism school. She got tricked, and now when you Google that person’s name, this is what you see.”

“Every mistake is unique,” English told J-Source. There is no one answer for assigning blame, although the Star tracks errors and has found that 80 per cent of those that require corrections are made by writers (including interns).

Amal Ahmed Albaz, the intern who made the error, declined to comment for this article.

When investigating, English said she speaks to all parties involved in handling a story to determine at which level communication broke down.  According to English, the reporter didn’t indicate she was having issues verifying her source, so the editors didn’t know to question her about her source more closely.

“From an editor’s point of view, I think in the first couple of months as you’re getting to know your new hires, you’d probably be extra careful and ask many more questions and try and get the sense of what they know and what they don’t know,” English said.

That being said, English and the Star editor Michael Cooke both agree that interns who make it through the hiring process are expected to be reporters, not reporters-in-training.

“I make the assumption that interns that make it at the Star can hit the ground running,” said Cooke.

But English isn’t unsympathetic to the possible ramifications such a column might have for new journalism graduates. She told J-Source about an intern who years ago asked tearfully to have her name kept out of a column, but after wide consultation with newsroom managers, it was decided English would, when it was necessary to explain an error to readers, name names. In that case, as with Albaz’s story, the intern was named.

“I’m very aware that things go on the Internet and stay there forever,” English said. But the Star is “a newspaper and we name names, we don’t keep names secret for the most part. That’s not in line with our policy.”

Cooke agreed with those who said the column put a bit too much blame on the intern.

“It was a difficult start for her and lots of people learned from that, including the people she works for,” he said. He noted, in particular, Albaz’s unusual request to sit down with him shortly after the correction ran.

Cooke told J-Source he told her: “don’t let this harm your confidence—learn from it and move on.”

“She’s terrific and I believe that she’s worked out to be just fine,” Cooke said.