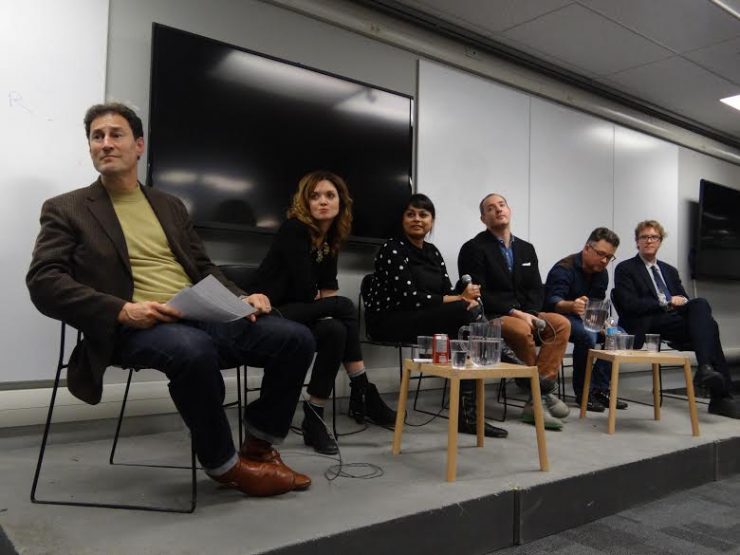 She was excluded from the Globe and Mail’s federal leaders’ debate this past fall, but Green Party leader Elizabeth May tweeted her way into the discussion, demonstrating how social media provides a platform for voices ignored by traditional news organizations.

Twitter and other social medial also give the public a greater role in determining what’s news, and generate discussion of news stories over time, giving them a new, virtual life, suggested news and social media experts during a panel at Ryerson University last month.

The discussion, moderated by TVO’s Steve Paikin and organized by RTA’s Transmedia Zone and the Ryerson Journalism Research Centre, explored how politics and news interacts with social media, with a focus on this year’s federal election.

Steve Ladurantaye, Twitter Canada’s head of news and government partnerships, said May’s ability to insert herself into the leader’ debate illustrates how the role of news outlets as gatekeepers of information is shrinking.

“She wasn’t invited to the debate by the Globe and Mail, so what did she do? She live-tweeted from Victoria… responding to the questions asked in Calgary. The next day if you opened a newspaper, you wouldn’t know Elizabeth May wasn’t there because if you’re doing good journalism you have to include her. So the role of media as gatekeeper was totally broken down in that instance.”

Media personalities, Ladurantaye noted, are also creating digital opportunities for themselves, harnessing social media and new technologies to create platforms outside of traditional media to voice their opinions.

“Right before the election, we lost Sun News… and what happened out of that was the most interesting story in Canadian journalism: the continuing existence of Ezra Levant…He’s managed to crowd source himself a television station,” Ladurantaye told the a crowd of journalists, journalism and media professors and students.

“This is the first time we’ve seen that breakthrough of a digital model, of someone with a very unique perspective trying to change into a news channel that caters to a specific group of people. You look at what Jesse Brown is doing with Canadaland, you look at what Ezra Levant is doing. If you find those micro-audiences, you don’t need to make that much money, you need to make enough to sustain yourself. I think there’s something there, it’s a pretty effective way to do journalism.”