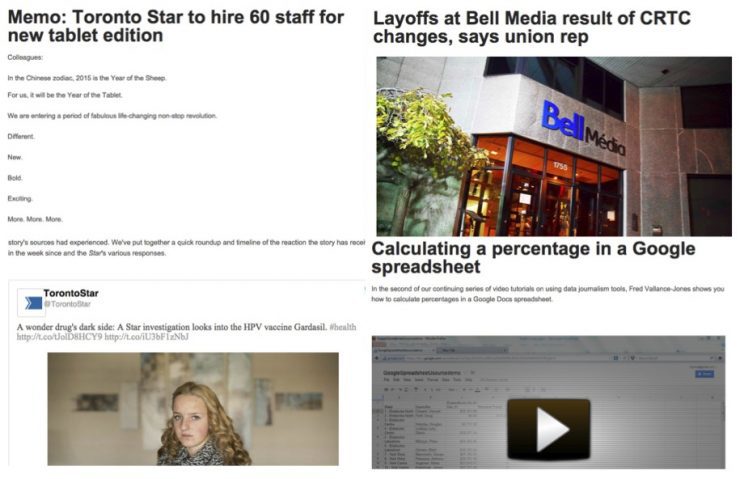 Tablet editions, journalists’ wages, and intern mistakes—that’s what kept readers coming back to J-Source in 2015. With another year behind us, we count down the top ten most read articles on the website.

In February, the Toronto Star drew international attention after medical professionals and health journalists began poking holes in its front page story about the quote-unquote, “dark side”, of HPV vaccines. Chantal Braganza tracked the story from its initial publication to when Star publisher John Cruickshank admitted on CBC’s As it Happens that the paper had failed in responding to criticisms of the story.

Sean Holman’s open letter begins, “Dear government spin doctor, I am working on a story about how the job you're doing is helping to kill Canada's democracy.” From there he outlines many of the grievances shared by any journalist who tried and get information from a publicist working for the government.

Why would a short news brief from 2013 about Laurie Graham crack the top ten most-read posts on J-Source this year? It could be that she was amongst the media that took a verbal lashing from an incensed Conservative supporter over the coverage of the Mike Duffy trial. Or it could be people still interested in her conflict with NDP leader Thomas Mulcair. Or it might just be people interested in finding out more about one of the top political reporters in Ottawa.

Should Star intern take the brunt of blame when a mistake is made?

Mistakes get made in journalism. But in the case of an intern working on their first piece, is it fair to blame them? Or do the editors need to take responsibility for their charge? Jane Gerster probes these question in her piece, which also marked a J-Source first: it got re-published by the National Post.

Calculating a percentage in a Google spreadsheet

It’s an old stereotype that journalists aren’t that great at figuring out technology. The fact that this story by Fred Vallance-Jones from 2012 is in the top five stories on J-Source this year doesn’t do anything to refute that idea.

Bell Media laid off people across the country in November—almost 400 in Toronto and Montreal alone. Representatives for Unifor, the union that represents many of the employees affected, placed the blame squarely on changes to CRTC regulations that did away with daytime Canadian content quotas and ad substitution, H.G. Watson reports.

After some speculation about his next job, former Globe and Mail editor John Stackhouse landed at the Royal Bank in early January. Later this year, he also released a book about the changes and challenges facing the news industry.

Chantal Braganza reported on a complaint that was the first of its kind—a reader who complained to the Quebec Press Council after two La Presse columnists blocked him on Twitter following a debate.

How much do journalists make?

Let’s get down to brass tacks, shall we? What aspiring and current journalists want to know is how much they are going to get paid. In 2012, Belinda Alzner and Angelina Irinici dug into the collective agreements for several news organizations to find out what the earning potential is.

Memo: Toronto Star to for new tablet edition
We hardly go a month before we report on another round of layoffs or another newspaper shutting its doors. So when the newspaper with the highest circulation in Canada announces it is starting a new tablet-only product and hiring a ton of people to get it off the ground, that is a really big deal.