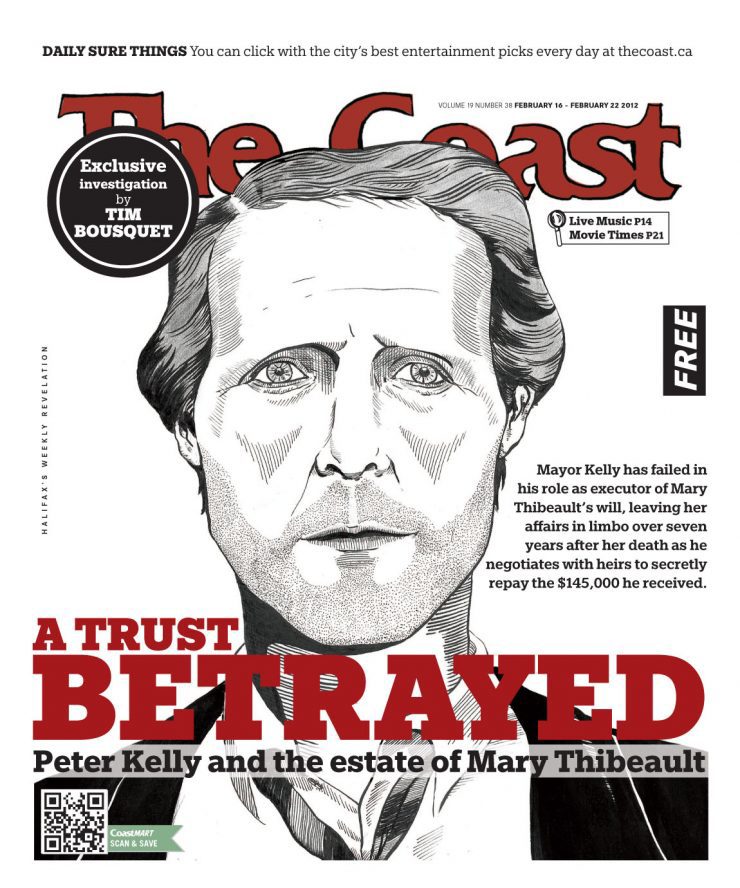 The Coast makes waves: How a Halifax alt weekly got a Michener nomination

An investigation into the mayor of Halifax generated national attention: the mayor chose to end his political career and The Coast landed a nomination for the Michener Award. J-Source interviewed The Coast’s editor Kyle Shaw and news editor Tim Bousquet as the alt weekly also celebrates its 20th anniversary.

Kyle Shaw remembers the first time he was invited as a guest to attend the Michener Awards ceremony. He had met John Raulston Saul, husband of then governor-general Adrienne Clarkson in 2004, and the two started talking passionately about journalism.

“All I could think was, that’s not how I wanted to attend the Micheners,” said Shaw, now editor at The Coast. “I didn’t want to go as a guest; I wanted to be there as a nominee.”

He’s getting wish: Twenty years – almost to the day in 1993 when Shaw and five other friends from King’s University launched The Coast, the Halifax alternative weekly is up for its first Michener nomination as it celebrates a milestone anniversary.

Although the weekly has a strong arts and culture bent, it doesn’t shy away from hard-hitting investigations like the one by news editor Tim Bousquet, which secured The Coast’s Michener nomination. Bousquet’s reporting revealed that Halifax’s popular three-term mayor had taken more than $160,000 from the estate of Mary Thibaullt, of which he was the executor, and seven years later had still not dispersed hundreds of thousands of dollars owed to charities and her heirs.

“The impact of this exemplary reporting was immediate: Mayor Kelly chose not to seek re-election, which changed the focus of the election campaign,” the nomination announcement reads.

“It sounds really clichéd, but it was like out of movie … me the journalist getting a brown envelope at a restaurant from a source that wanted to remain anonymous,” Bousquet said.

Bousquet is originally from Arkansas and followed his Canadian wife to Halifax. He started freelancing for The Coast and rose quickly to become the news editor/municipal reporter. In 2011, he wrote a modest story on the estate based on public records. But, he said there were some details that kept gnawing at him, so he kept at it for 11-months before finally landing on a confidential source that gave him access to the background that cracked open the story.

“I didn’t grasp the magnitude of the story … that it would be the end of Kelly’s career (and that) left me flabbergasted,” Bousquet said.

He says The Coast has built a reputation for doing solid reporting and the proof is in this investigation: “The initial person who alerted me told me they felt comfortable coming to The Coast based on its reputation.”

That reputation took a long-time coming.

“It’s not like we were in a war room charting out how to score a Michener nomination, but it took a really long time before we got any sort of recognition. Maybe we were dismissed as an alt weekly, but (then) one year we just started getting nominated,” Shaw said. “It’s like we went through a door of legitimacy.”

And it’s not like Bousquet has always been right. As the weekly itself acknowledged, “the paper has had to issue apologies for a couple of his stories. But he brought a passion and a panache to local news that quickly made him a must-read among the city's chattering classes,” writes Stephen Kimber.

Shaw recalled that in 1993 Kimber, his journalism professor at King’s University, told him the Daily News had pulled the plug on its arts supplement. “He told us, ‘there is a hole in the market and you should fill it,’” Shaw says. “None of us had any job prospects at the time and we had the naiveté to try our hand.”

Only two of the original six founders are still at The Coast. Publisher Christine Oreskovich and Shaw married in 2002, while the others have had successful careers, some as journalists at other organizations.

The Coast is inspired by alternative weeklies like New York’s Village Voice, Shaw says. “We are still very serious about the arts, but we also like to do tough stories,” he says. “The Village Voice was a model of citizen newspaper that gives a shit about the city. It cares about the bars and bands, but also city council.”

In a note celebrating The Coast’s 20th anniversary, Oreskovich and Shaw say The Coast's “highest ambition is to be a community newspaper.” It now reaches 104,174 readers online, in print and through mobile weekly.

“From that first issue in 1993, The Coast's community has grown to include one out of every five Haligonians,” he said. “This community lives at the heart of the new Halifax.”