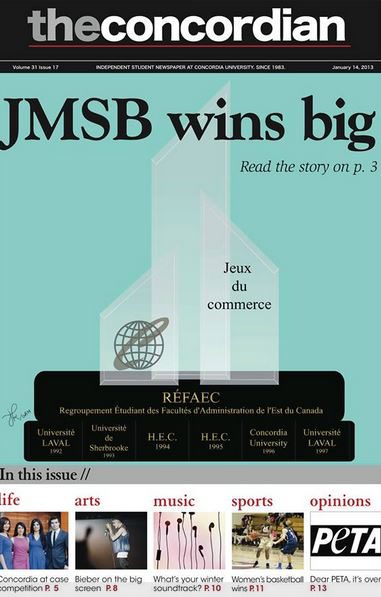 One of Concordia University’s campus papers drew criticism for not using the word “plagiarism” in its initial apology for lifting passages from CUP, a non-profit cooperative of student newspapers, of which it is a member.

The Concordian, a student newspaper at Concordia University, issued an apology after one of its news editors, Tim Weynerowski, was accused of plagiarizing an article on the Quebec government’s charter of values from the Canadian University Press (CUP).

In a statement released online, The Concordian vowed to audit its ethics policies and acknowledged that several passages were lifted from an earlier story by CUP’s Quebec bureau chief, Kalina Laframboise, and incorporated into Wyenerowski’s article.

This was the second time The Concordian published a statement on the incident. Its first statement, issued three days earlier, drew criticism from Laframboise and CUP, a non-profit cooperative of student newspapers of which The Concordian is a member, for its omission of the word “plagiarism.”

At that time, The Concordian had referred to the unattributed passages as sharing “unintentional similarities.”

“The fact that we find ourselves in a situation where we even have to ask The Concordian to reissue its retraction is unfortunate,” wrote CUP president Erin Hudson and national bureau chief Brendan Kerginwrote in a blog post. “We were assured on Jan. 14 that a formal apology and retraction ‘for having allowed, through oversight, plagiarized material to be published in our paper’ would be forthcoming. Due to this email, we were surprised and disappointed to see no apology and no mention of plagiarism in the retraction published Jan. 20.”

CUP later thanked The Concordian for rectifying its statement and said it would reach out to its members to make sure they understand the concept of plagiarism and proper attribution.

“The work of CUP’s bureau chiefs is for your use and you are welcome to take paragraphs of their writing to add background or national context to a local story, but you must credit them,” Hudson wrote. “A simple ‘with files from’ or, if the situation warrants it, a double byline, suffices as proper attribution.”

Laframboise, who is a former news editor at The Concordian, told J-Source she was satisfied with the paper’s second retraction.

“At least it was truthful, and you have to be fair to your readers as well—and the first one wasn’t,” she said.

Laframboise added that the paper could do more to prevent plagiarism. The paper’s bylaws, she points out, fail to mention plagiarism. “There should be some policies put in place for plagiarism, because I don’t think there’s any way of handling that at the paper,” she said.

According to Tyson Lowrie, a member of The Concordian’s board of directors, the paper’s bylaws were not designed with ethics in mind. “The Concordian’s bylaws are strictly about the administrative side of The Concordian as a not-for-profit organization,” he wrote in an email to J-Source. “The editorial staff is trained and follows guidelines in accordance with the policies set by The Canadian Press.”

While Weynerowski remains an editorial staff member of The Concordian,, the paper intends to conduct an internal review with feedback from CUP.

“Right now the first step is bringing in new board members so that as a board we can function more effectively. Our board consists entirely of unpaid volunteers with other serious time commitments,” he wrote. “We have to find people who are able to give these tasks, as well as in general reviewing our procedures for handling and investigating allegations of plagiarism, the time and energy they require. The goal is to be able to provide support to the editorial staff of the paper so that they can get on with putting out a good editorial product.”

Here are the bolded passages that CUP claimed were lifted:

Weynerowski wrote the following on Jan. 7: “Both universities take issue with certain key elements of the proposed Charter which include prohibiting civil servants from wearing ostentatious religious symbols and limiting time off for religious reasons.”

Laframboise also described Concordia University as “the third and last English university in Quebec to publicly denounce the charter of secularism proposed by the Parti Québécois.“

Laurent Bastien Corbeil is a Montreal-based journalist whose work has appeared in Maisonneuve, and he has worked as a news editor at The McGill Daily. He will be interning at the Toronto Star this summer. Follow him on Twitter @bastienlaurent.