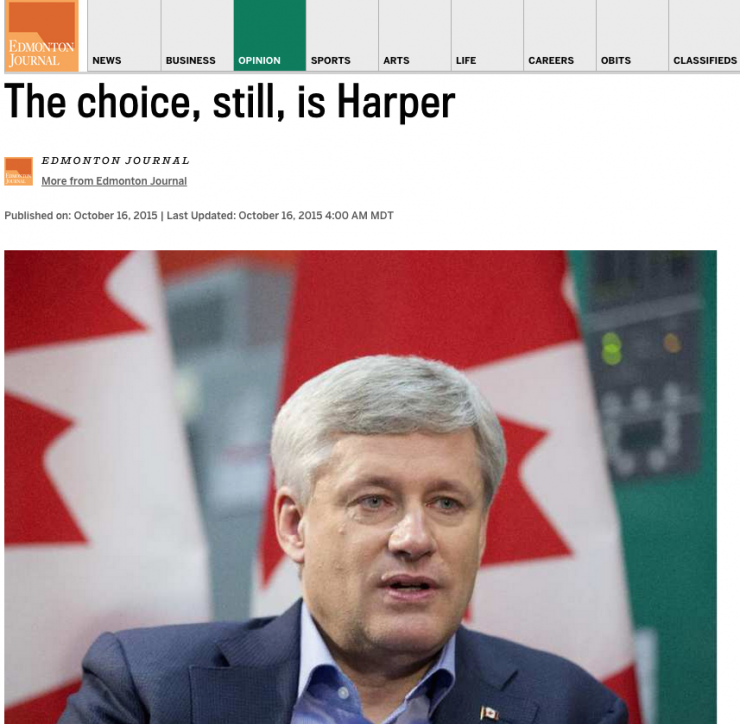 The need for transparency with political endorsements

Owners of newspapers have right to make endorsements, but readers need to know when they do so.

When endorsements started rolling out in the days before the election, all Postmedia newspapers endorsed the Conservatives—a decision directed by their head office. Among them was the Edmonton Journal.

Journal editor-in-chief Margo Goodhand said she respected and defended the company’s right to publish such endorsements. “It really has come down to the editorial space, which is theirs—they own it and it is their voice,” she said.

“The problem is that our readers don't know that's the way it works,” Goodhand said, which is why it is important to her to clarify the role of the owners and the editorial board for readers.

She said if newspapers are going to make endorsements that are directed by their owners, they should be upfront about it. “It would be more honest if you just said, ‘This is a Postmedia editorial,’” she said. “You owe it to the readers.”

Directing endorsements is not a new practice for Postmedia—in May, Canadaland wrote about how the company had directed its Alberta outlets to endorse the Progressive Conservatives on the eve of the provincial election. It’s also a common practice among other newspaper chains. In 2001, CanWest ordered its 17 newspapers to print editorials written at their head offices. The plan was met with protest at the time. Historically, it is a normal practice.

When asked by the Globe and Mail, Postmedia President Paul Godfrey confirmed that Postmedia had directed the chain’s endorsements, and that it was ultimately his decision.

J-Source contacted the editors-in-chief of eight of Postmedia’s daily newspapers, including The Ottawa Citizen, The Montreal Gazette, The StarPhoenix and The Journal, as well as Phyllise Gelfand, vice-president of communications at Postmedia, requesting an interview to clarify the role Postmedia played in directing the endorsements. At the time of publication, only Goodhand had responded and agreed to speak on the record.

The Journal’s editorial board had wanted to publish an editorial that didn’t endorse any political party, but instead advocated for change, according to Goodhand.

Goodhand, who joined the Journal in 2013, said the paper had endorsed the Conservatives in federal elections as far back as 2006. However, the Journal hadn’t endorsed a provincial candidate since 2004, which made its 2015 endorsement of PC leader Jim Prentice even more of a shock.

Aside from those two political endorsements, Goodhand said Postmedia has never interfered with any other editorial content during her tenure as editor-in-chief. The Journal even ran letters expressing anti-Harper sentiments beside the endorsement editorial the day it appeared in the paper. Columnist Paula Simons also wrote a column encouraging people to vote out of “hope for our shared future,” rather than fear.

As Goodhand pointed out, why would Postmedia direct the Journal’s day-to-day editorials? It’s not as if some of the editorial topics the paper covers—the LRT debate, whether a historical church should be taken down—would be high on the agenda for a national media conglomerate.

What readers found most surprising during the provincial election, for instance, was how out of step the Alberta Postmedia newspaper endorsements were with the general atmosphere of the election. “There was this huge surge of anger because there was such a desire for change in the province,” Goodhand said. “And it was jarring. It was saying, let's keep the status quo.”

Goodhand now adds a tagline to some editorial pieces that explains they are the consensus opinion of the editorial board, and includes the names of the members of the board. Such an explanation was absent from the paper’s Conservative endorsement, but it was included in an endorsement written by the paper’s own editorial board and published the day after the election in which they wrote that voters demanded change.

Her personal preference would have been no endorsement at all. “I just think the whole idea of newspapers directing the citizens to get out and vote because we know best and we've decided for you is kind of archaic,” she said.

The Winnipeg Free Press, which is owned by FP Newspapers Inc., succeeded in doing what Journal staff had intended—its editorial board wrote an editorial endorsing voting and dropped its paywall on political reporting for the weekend.

Bob Cox, publisher of the Free Press, said the paper stopped making political endorsements because newspapers no longer have that voice in the community. “We try to engage and inform people, and give them as many facts and opinions as possible on which to base their own opinion,” Cox said, but don’t presume to tell them the “right” way to vote or act. “We don’t feel that newspapers have that much influence to actually persuade anybody.”

He said there has been virtually no reaction from readers to the absence of endorsements in the Free Press.

Cox also said there should be as few unsigned editorials in the paper as possible—the Free Press publishes a single editorial a day. And, Cox added, its owners have never interfered with their endorsement or editorial process.

Postmedia is far from the only company that has drawn criticism for not being transparent in its editorial endorsement process. Last year, during Ontario’s provincial election, Canadaland reported on allegations that the Globe’s editorial board pick of a Liberal minority government was vetoed by editor-in-chief David Walmsley in favour of an endorsement for the Progressive Conservatives.