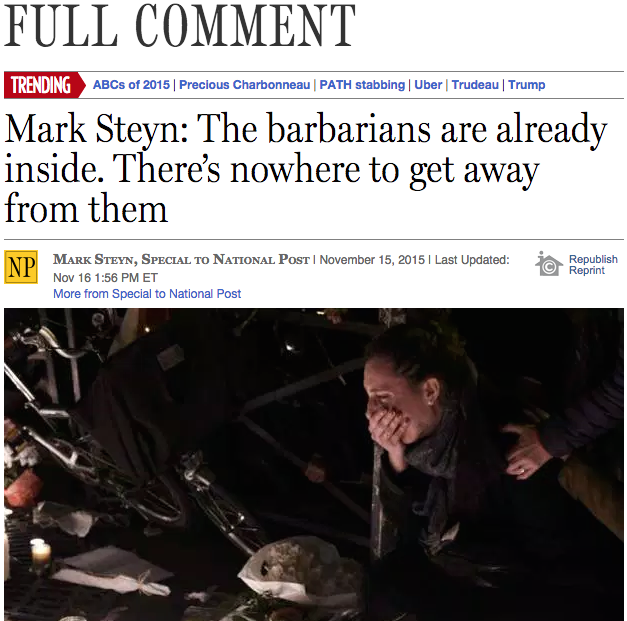 The thin line between free speech and hate speech

Newspapers and online media should be cautious when reporting and printing comments of Trump, Steyn.

Donald Trump has called for a “total and complete” ban on Muslims entering the United States. His remarks are shocking and reckless. Had they been made in Canada, they might even amount to hate speech under the Criminal Code.

A reporter from the National Post contacted me to ask whether I thought Trump’s call for the exclusion of Muslims might breach Canadian law.

My answer was guarded. Speech will breach the Criminal Code ban on “the wilful promotion of hatred” only if it is intended to stir up hatred against the members of a racial, religious, or other “identifiable” group. In its most familiar form, hate speech makes the claim that the members of such a group are less human or less worthy than others or that they share a dangerous or undesirable trait.

The implicit message of Trump’s call for exclusion is that Muslims are dangerous or at least that many of them may be dangerous. But he does not say this directly—and indeed he says that this exclusion should be enforced until “our representatives know what’s going on,” suggesting that the problem is our lack of knowledge about Muslims or our inability to distinguish the ‘moderate’ or mainstream from the violent fringe. Of course, his remarks are made and understood against a background in which statements linking Muslims and violence have become disturbingly common in public discourse.

There is, perhaps, a stronger case to be that Trump’s earlier comments about Mexicans in the United States amounts to hate speech because they involve explicit claims about the character of Mexicans—that Mexicans are more likely to commit murder and rape and so should be feared and excluded.

After speaking to the National Post reporter about Trump’s comments, I recalled that just after the recent terrorist attack in Paris, the paper published an opinion piece by Mark Steyn, which implicates the entire Muslim community in terrorist violence and, like Trump, calls for an end to Muslim immigration into Western countries.

Steyn says that “most” of the Muslims who have settled in Europe “don’t want to participate actively in bringing about the death of diners, concertgoers and soccer fans, but at a certain level most of them either wish or are indifferent to the death of the societies in which they live—modern, pluralist, western societies”.

Despite his informal or folksy writing style, Steyn is very careful in his wording. He suggests but never quite says that all Muslims support violence. The suggestion in the first half of the quoted statement is that most Muslims, passively support violence—the murder (death) of non-Muslims; yet in the second half he adjusts his claim suggesting only that they wish for the “death” of liberal democratic society. The use of the word “death” first literally in relation to individuals and then figuratively in relation to society, holds the two parts of the sentence together and serves to taint all Muslims with the violent acts of the few.

In Steyn’s account even if most in the Muslim community do not actively aid and abet acts of terrorism, they are at least passively— and culturally—complicit in these acts. This is the obvious message, when he states that the Muslim community provides “a very large comfort zone in which [the terrorist may] swim, and which the authorities find almost impossible to penetrate.”

Steyn succeeds in making the debate about just how many Muslims support violence. Once this is the ground of the debate, it becomes easy to present 'moderate' Muslims as exceptional. But Steyn goes farther than this, suggesting that Muslims vary only in the degree of their commitment to, or sympathy towards, violence as an instrument to advance their faith.

Steyn’s answer to the terrorist problem is “to end mass Muslim immigration.” Perhaps he believes that we have no effective way of distinguishing the terrorists from the mass of Muslims—and so the only way to keep the terrorists out is to keep all Muslims (by which he means people from Muslim countries or with Muslim-sounding names or Muslim ancestors) out of Europe.

An ordinary reader, though, will have no difficulty understanding this call for exclusion, and indeed the entire piece, as an assertion that Muslims—the vast majority of them—are supporters of violence. It is bigoted stuff. And coming as it does, in the wake of a large-scale terrorist attack, when feelings of fear and anger are strong, it is irresponsible and dangerous. But Steyn is careful in his recklessness, cautious in his irresponsibility, and temperate in his vilification.

Steyn may have successfully skirted the criminal ban on hate speech, which catches only extreme and explicit forms of group vilification. However, the decision of the National Post to profile these distorted and malicious claims is, to say the least, disappointing.

A newspaper is an important part of the public sphere where discussion about the affairs of the community takes place. As such, it carries a responsibility not to defame or stereotype identifiable groups within the Canadian community—groups that often have a limited opportunity to respond.

[[{“fid”:”5198″,”view_mode”:”default”,”fields”:{“format”:”default”,”field_file_image_alt_text[und][0][value]”:””,”field_file_image_title_text[und][0][value]”:””},”type”:”media”,”link_text”:null,”attributes”:{“height”:5520,”width”:3680,”style”:”width: 75px; height: 113px; margin-left: 5px; margin-right: 5px; float: left;”,”class”:”media-element file-default”}}]]Richard Moon is a Professor in the Faculty of Law, University of Windsor. He is the author of  The Constitutional Protection of Freedom of Expression (U of T Press, 2000) and Freedom of Conscience and Religion (Irwin Law, 2014), editor of Law and Religious Pluralism in Canada (UBC Press, 2008) and co-editor of Religion and the Exercise of Public Authority (Hart Publications, 2016). He wrote an influential report for the Canadian Human Rights Commisssion in 2008 – "The Regulation of Hate Speech on the Internet". He is currently completing work on a book entitled "Putting Faith in Hate: When religion is the subject or source of hate speech".