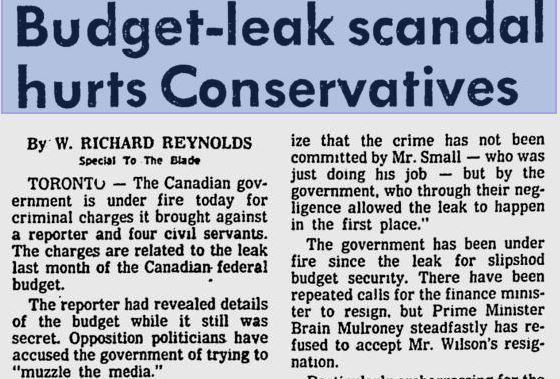 Global TV Parliament Hill bureau chief Doug Small caused ripples in Canada's political landscape when he leaked the government's budget on Apr. 26, 1989. He was later charged with stolen property, and although the charge was later thrown out, Small remains the only Parliament Hill reporter ever to be charged with a crime for reporting a story.

Global TV Parliament Hill bureau chief Doug Small caused ripples in Canada's political landscape when he leaked the government's budget on Apr. 26, 1989. Small got a copy of the Budget in Brief from John Appleby, a defence department clerk (whose friend worked at the recycling plant where it was found).

Small read the document's highlights on air that night. He revealed the numerous cuts in the budget, which also raised taxes by $9 billion. Finance Minister Michael Wilson reacted by introducing the budget that evening in an impromptu news conference, but the damage was done. It sparked public outcry over the taxes but, as the Ryerson Review of Journalism noted, the public also “chastised Small for the way in which he scandalized the government.” Columnists from across the country defended Small's actions, while another Ottawa station argued the details of the budget should have been left out. That station, CJOH, actually turned down a caller who offered it the document.

Prime Minister Brian Mulroney called the leak a criminal act and, about a month later, Small, Appleby, the recycling plant employee and two others were charged with possession of stolen property. There were accusations that the government pressured police to lay charges.

The charges against Small were thrown out on July 15, 1990. As the Blacklock's Reporter notes: “he remains the only Parliament Hill reporter ever to be charged with a crime for reporting a story.” For Small's part, he says he's never regretted the story. Earlier this year, Small reflected on this monumental moment in journalism in a commentary titled “A Reporter's Job.” Read it here.