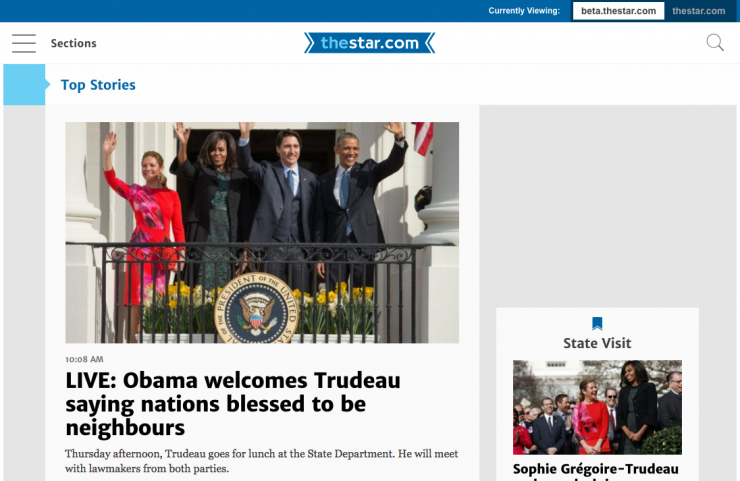 Toronto Star website gets overhauled with mobile in mind

New site is in beta-testing phase and is expected to be fully rolled out in the spring.

The Toronto Star’s new website is getting an overhaul—one that prioritizes the mobile user experience.

Though much attention has been paid to Star Touch, the Star’s tablet app that launched last year, thestar.com has also been under development for the past few months. Thirty-five to 50 per cent of all the traffic that goes to the website in any given month comes from mobile users, according to Christopher Goodridge, Star Media Group’s chief operating officer of digital. The new, fully responsive website, is still in its beta-testing phase.

Goodridge spoke with J-Source about the new website and how it fits into Torstar’s larger digital designs. This interview has been edited and condensed for clarity.

J-Source: What prompted the redesign?

Chris Goodridge: The philosophy behind it is a mobile-first approach. It’s fully responsive, so I think it was a realization that as traffic patterns are continuing to shift to mobile and sources of traffic are changing, we have less traditional “come to the homepage” kind of traffic and more and more referral traffic. The whole redesign is meant to reflect that reality.

Also, we haven't had a redesign in several years, so it was an opportunity to give a much fresher, more modern feel to thestar.com.

J-Source: The Toronto Star has put a lot of emphasis on the tablet edition, but you mentioned you are getting a lot of smartphone traffic. Does the new website work in conjunction with the tablet edition or is this considered a different product?

CG: It’s the browser experience. So, the mobile app hasn't changed. We’re kind of looking at how that would work in conjunction with what we've done on the browser, but also with Star Touch, which has been a huge project for us as well. So our focus will continue to be having a great experience across all platforms whether it’s native apps on mobile and tablet, or the web.

J-Source: When we spoke to the tablet app lead last year, he said that the phone version of Star Touch was a long-term goal. But will this new website be what mobile visitors use instead of the app?

It’s really recognizing the fact that people access our website across all kinds of different platforms—we want to make sure that we have the best experience for those platforms. The tablet continues to be obviously a hugely important part of what we are doing. I think when we think of the native app experience for mobile, that is where you may see more look and feel like Star Touch, but again, we're at the early stages of deciding how to tackle that.

J-Source: So basically, the site and the apps are being treated as two different products?

J-Source: How important is the home page in this new design?

CG: It still has relevance. We haven't moved completely away from the home page. Even the aggregation pages for sections are still important. But we've definitely emphasized the article page and thought about the article page as being the point of entry for a lot of our users.

I think just by nature of the fact that the article pages have become more important the homepage will become less important. The way someone navigates the site is different as well.

You'll notice on the beta we have the hamburger menu. I think that will actually be used quite a bit. It’s more of a universal way that people are navigating mobile pages, even on the desktop.

J-Source: When do you expect this will become the Toronto Star's website?

CG: It should happen in the second quarter, so anytime between the beginning of April to the end of June but probably in the May timeframe assuming no other kinks are discovered.

J-Source: Several other Torstar properties have slightly older websites as well. Will the same design be rolled out to them eventually?

CG: They are in different platforms, but the design principles we are sharing across the company. You know, the hope would be that starts to happen, because I do think it is a step forward.

All the things we've learned and applied to the Star will be shared through the company. Sometimes different regions have different approaches but I would expect that some will go in a similar direction.

Correction: An original version of this story associated to Goodridge's title with Torstar, when it is his title with the Star Media Group. We apologize for the mistake.