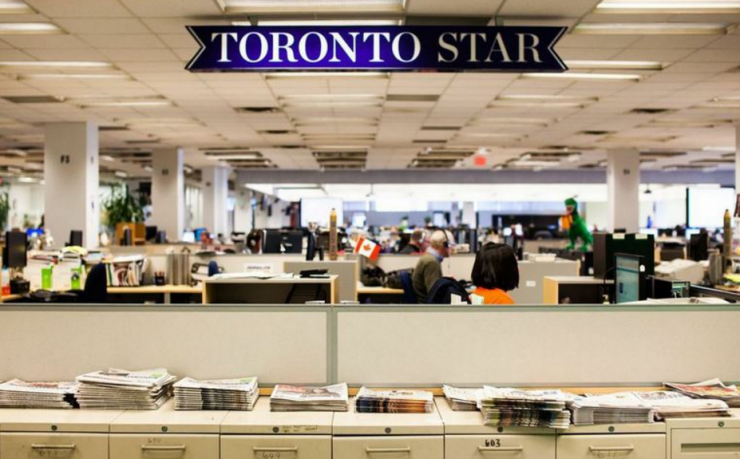 Torstar Corp. is reporting a $234.5-million loss for the fourth quarter, mostly as a result of writing down the value of its newspaper businesses.

Torstar Corp. is reporting a $234.5-million loss for the fourth quarter, mostly as a result of writing down the value of its newspaper businesses.

Torstar (TSX:TS.B) says the net loss amounted to $2.91 per share, including one cent from discontinued operations.

The loss included $213.3 million of non-cash items related to asset impairments at its continuing operations.

Those included $130.6 million within the Metroland Media group of smaller newspapers and $70.5 million at the Star Media group, which includes the company's flagship Toronto Star.

After adjusting for certain items including the writedowns, Torstar's loss was 10 cents per share. That included a 32-cent non-cash item that's mostly due to the recent acquisition of VerticalScope, a North American digital media business.

David Holland, Torstar's president and CEO, noted that the company's newspaper operations continued to feel the effects of a challenging print advertising market.

"This was a significant year of transition at Torstar as we took the steps necessary to position ourselves for a more digital future," Holland said, noting VerticalScope and the launch of Star Touch — a tablet-only product from the Toronto Star.

"Looking forward, in 2016 we anticipate that growth resulting from our efforts and investments in digital operations will increasingly help to offset continued pressure on print advertising revenues," Holland said in a statement.

"We will also remain focused on resizing the cost base including execution of the outsourcing of printing of the Toronto Star."

The company recognized $7.5 million of restructuring and other charges in the fourth quarter, down from $10.9 million in the comparable 2014 period. The company estimates 90 positions will be eliminated and $6.3 million of annualized cost savings.

In total, Torstar estimates restructuring initiatives undertaken last year will produce about $22.5 million in savings in 2016.

In addition, it expects a further $4 million of savings this year and $10 million on an annual basis thereafter from outsourcing its printing to Transcontinental, as announced in January. That's expected to cause 220 full-time and 65 part-time job cuts.

One of Torstar's Metroland Media papers, the Guelph Mercury daily, also ceased its print edition in January — putting 23 full-time and three part-time employees out of work.

The company noted that the three-month period ended Dec. 31 was the first full quarter with contributions from VerticalScope. Torstar bought a 56 per cent interest in the digital media company in July for about $180 million.

Torstar holds an investment in The Canadian Press as part of a joint agreement with a subsidiary of the Globe and Mail and the parent company of Montreal's La Presse.