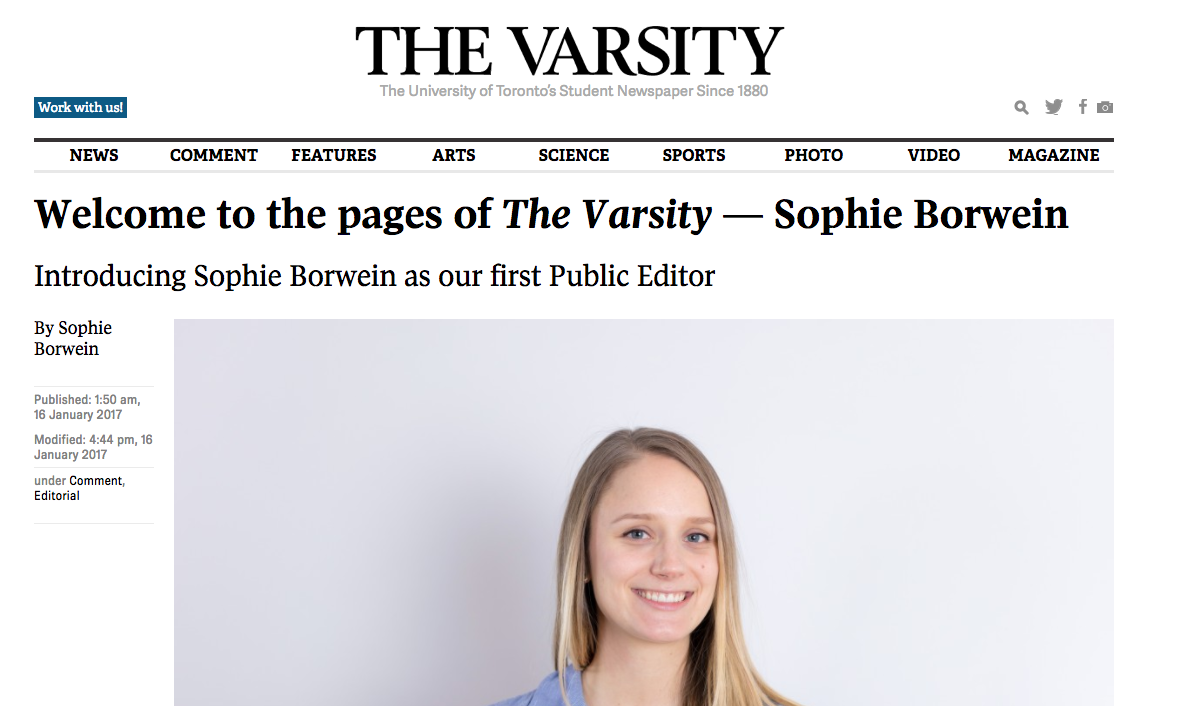 Sophie Borwein joins the ranks of public editors and ombudsman in Canada.

There’s a new public editor in Canada—and she calls a campus newspaper home.

On Jan. 16, Sophie Borwein was named the first-ever public editor at the Varsity, the University of Toronto’s student newspaper.

“I think it’s going to be an adventure,” she told J-Source.

The Varsity, a 137-year-old paper, serves a student population of over 80,000 at U of T, which includes two satellite campuses in Mississauga and Scarborough. It publishes weekly through the academic year.

Editor-in-chief Alex McKeen says they’ve been working on establishing the public editor post for about a year. “I know that trust in the media is not at an all-time high right now,” she said. “So it’s especially important for news media organizations—perhaps particularly news media organizations at the university level—because these are papers that students are interacting with as they are developing their sensibilities towards newsmedia and what it means to be an active citizen.”

Only three newspapers in Canada have public editors—The Toronto Star, The Globe and Mail, and the Brunswick News group. CBC and Radio-Canada both have ombudsmen. As far as McKeen is aware, there are no other Canadian campus publications who have a public editor.

Borwein is new to the Varsity. She’s currently a PhD student in Canadian political science, and also obtained her master’s degree in public policy from U of T. The team at The Varsity specifically wanted someone who had some distance from the paper. “You often have to criticize the group of people that write for the Varsity,” said Borwein. “That can be that much harder when you’ve had an experience in the other side.”

She’s spending some time getting to understand how the paper works and sorting out what relationship she’ll have with the rest of the newsroom.

For now, Borwein plans on publishing columns frequently enough that the student body gets to know her and understand her role. But as campus controversies arise—and they always do—she expects to be writing more frequently.