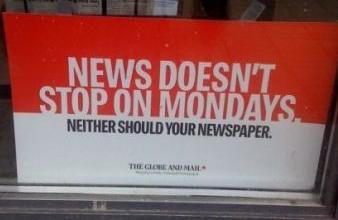 UPDATED: The Globe and Mail suspends delivery on Labour Day due to lack of advertising

In a note to subscribers, publisher Phillip Crawley said The Globe and Mail will not publish on Sept. 2 due to lack of advertising revenue, which was necessary to cover the shortfall from the number of vacation stops and the printing costs of the newspaper.

The Globe and Mail will not publish on Labour Day Monday due to a lack of advertising revenue for the long weekend issue.

In a note to subscribers, publisher and CEO Phillip Crawley said the advertising revenue was “needed to cover the costs of formatting, printing and delivery of the paper, and the number of vacation stops by subscribers” in effect for Sept. 2.

"Labour Day is always one of the worst revenue days of the year, and just doing the simple math, it cost us way too much to produce the paper," he said in an interview with the Canadian Press. “This isn't a one-off fluke or that suddenly the industry's collapsing. It's a reality and we've just said this time it really doesn't make much sense."

The note to subscribers does not say if they will be reimbursed or offered a discounted rate for the lack of delivery on Labour Day. However, J-Source called the customer service line and was told subscribers will be credited for the edition. Crawley did not immediately respond to J-Source’s request for more information.

When the National Post killed its Monday edition during the summer of 2009, The Globe and Mail launched a taunting marketing campaign that read “News doesn’t stop on Mondays. Neither should your newspaper.”

With @globeandmail announcing no paper Labour Day Monday, is it a bad time to remind them of this little campaign? http://t.co/kwygjOdbZh

@jsource Globe's marketing dept. had a field day when the Post stopped publishing on summer Mondays. I hope the irony is not lost on them.

Phyllise Gelfand, vice-president of communications at Postmedia Network, said its newspapers will not publish Labour Day editions. “Last year Calgary [Herald], Edmonton [Journal], Montreal [The Gazette] and Ottawa [Citizen] published on Labour Day but will not this year.” However, Star Media Group president John Cruickshank told J-Source that the Toronto Star will not suspend delivery on Labour Day.

“Certainly there is a threshold below which it’s not profitable to publish,” he said. “I would say for a lot of newspapers, most Mondays and Tuesdays are not as profitable as other days of the week because there’s typically less advertising on that day.”

The Star only forgoes publishing a print edition on Christmas Day, but Cruickshank explained that is to give staff time off.

“We have a commitment to daily journalism, and that doesn’t mean six times a week or five times a week,” he said. “I think there is a tremendous erosion of loyalty when newspapers experiment with publishing fewer times a week.”

Metro newspapers (which are owned by a subsidiary of Torstar), however, do not publish on statutory holidays. This, Cruickshank said, is due to the fact the free dailies are essentially commuter papers.

He speculated the Globe can afford to cut its Labour Day edition since its readership base is from the business sector, which follows the markets, which are closed on Monday. “The Star has a far broader retail base and they expect to have the paper every day.”