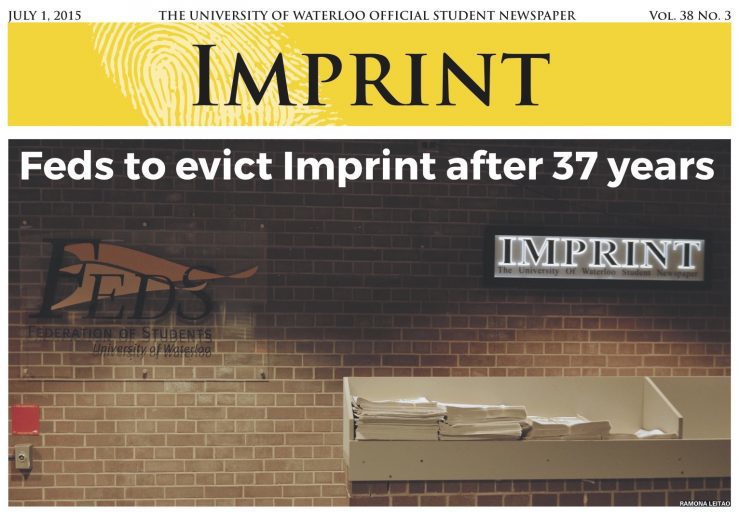 In May, staff at Imprint were told their lease would not be renewed, a move they say was politically motivated.

In a month’s time, the staff and volunteers of the University of Waterloo’s campus paper will vacate the office they’ve called home for 37 years.

Journalists at Imprint, which serves over 30,000 students at U of W, were notified by the Federation of Students, the university’s student union, on May 1 that their lease would be terminated and they would have to move out of their approximately 1,800-square-foot space in the Student Life Centre building on Oct 31.

After a media campaign following the decision, Imprint’s board of directors and editorial staff continued discussions with the Federation of Students through the summer, hoping to come to an amicable agreement.

“I’m personally hopeful we will be able work something out,” said Jesse McGinnis, chair of the Imprint board. “It’s just the options that have been presented to us aren’t what we would call ideal.”

Carly McCready, vice-president of operations and finance at Federation of Students, told J-Source that they plan to present Imprint’s board and staff with a new lease agreement for a 1,200-square-foot space in the lower atrium of the Student Life Centre. “We spent a lot of time understanding their production cycles and things like that to make sure we could find a space that accommodates them,” said McCready.

“Over the summer, we assessed that the 1,200-square-foot space in the lower atrium will work for their needs,” she added. “We think that’s a great place for them so we’re hopeful that they’ll be happy working there.”

The new space is about 500 square feet smaller than Imprint’s current space. Imprint has about 150 to 200 volunteers, and there is a steady flow of them in and out of the office to use the 13 computers and other equipment. In 2014, Imprint paid $13,504 in rent. It is, according to McGinnis, the only option available to them at U of W currently—though they explored other on-campus options, university staff told them the atrium space was the one best-suited to them. Chris Read, associate provost of students at U of W, declined to be interviewed for this story.

However, McCready said Imprint will be able to book additional rooms in the Student Life Centre as needed.

McGinnis is not holding out hope that Imprint will be able to strike a last-minute deal to stay in their current space. “In every discussion we have, we bring it up and we remind them that to us, [staying where we are is] really the best solution and the easiest solution. But repeatedly they have said no.” The current space has enough room for all of their staff and volunteers, along with room for their equipment storage and production facilities. McGinnis said they still have to determine what renovations the new space would need to make it workable.

When news of the eviction first broke, Aliya Kanani, Imprint’s executive editor, published an editorial accusing the student government of having political motives in terminating Imprint’s lease. During the previous school year, the newspaper had published several stories detailing the Federation of Students closed board meetings and efforts to increase student fees—after which, Kanani wrote, the student government began to decrease its advertising in Imprint.

McGinnis still believes that is why the Imprint was removed from its current office space. “I think that still played a huge piece,” he said. Though the previous board was the one that made the decision not to renew Imprint’s lease, McGinnis said the current board could have done more to work with the paper’s staff to find a solution.

But McCready denied any political motives on the part of the student government. The decision, she said, was solely based on student needs. “We’re just working to make the best use of space for all students,” she said, adding that they are reviewing all space in the Student Life Centre.

McGinnis said the paper is looking at off-campus options that may provide more security in the long-term. However, for him, it is still ideal that Imprint stay in the heart of U of W, which is why they are seriously considering the move to the lower atrium.