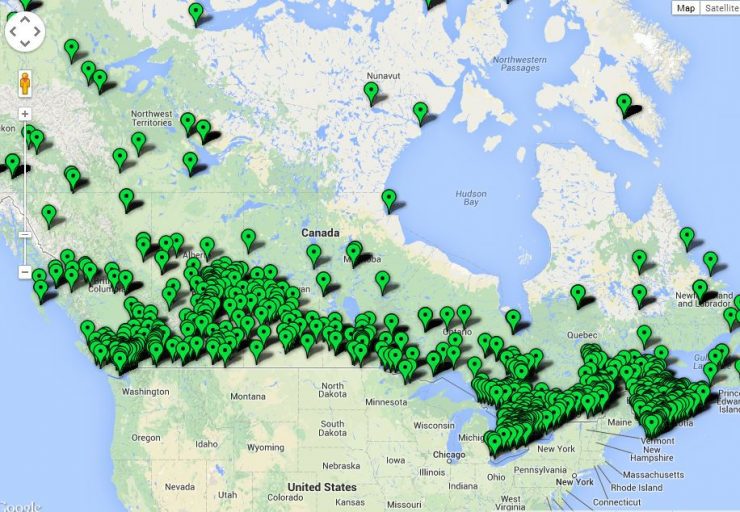 Carleton University journalism students undertook an ambitious project to data map all the funding announced in 2013 by the federal government. J-Source publisher and Carleton journalism professor Christopher Waddell explains how his students worked with CBC to complete the project and the bumps along the road and his students write about the challenges they encountered.

Carleton University journalism students undertook an ambitious project to data map all the funding announced in 2013 by the federal government. J-Source publisher and Carleton journalism professor Christopher Waddell explains how his students worked with CBC to complete the project and the bumps along the road and his students, Erika Stark and Cullen Bird, write about the challenges they encountered.

The most interesting projects often begin in unexpected ways.

This one started with a chance encounter with Evan Solomon who was filling up helium balloons at the grocery store for his son’s birthday.

His suggestion that the CBC do a project with Carleton journalism students turned into an October pitch to Ottawa bureau chief Rob Russo and politics senior producer Chris Carter on behalf the business and financial journalism class I teach with the CBC’s Julie Ireton.

As a pre-budget project, I suggested to the CBC and then to the class that we record and map all the grants the federal government gave out in 2013. Students would collect the data and the CBC would do the data merging, web presentation and publish their stories. It can’t be that difficult, or so I thought in persuading the class to do it. The students agreed in mid-November.

We started by determining our methodology. We would list all 2013 grants and contributions on websites of the 308 members of parliament. We wanted announcement dates, recipient of the money, project description, dollar value, a link to the news release announcing the funding, the federal department or agency providing the money, the federal constituency in which the recipient of the funds is located, the member of parliament for that constituency and his or her party affiliation and that MP’s 2011 (or subsequent by-election) margin of victory.

We split up the country into 21 regions and each student in the class was given a region’s MPs and also a federal department. Through December and January, the students searched for the details on the websites and inserted the data into spreadsheets. Each student would also do a story (text, audio or video) for the CBC site about one project or something else we discovered (for example, why did almost half the MPs have no spending announcements at all on their websites?).

By mid-January, the size of the project threatened to swamp us. I had underestimated both the amount of work and that it was unevenly distributed among the students. Some departments and MPs has dozens or hundreds of announcements while others had none.

Data journalism can turn up fascinating results but as the class told me bluntly, filing out spreadsheets, using postal codes to find MPs and looking up individual 2011 election results is indescribably boring.

We also learned that quality control of the data is essential. Everybody has to enter everything exactly the same way. For example, is the riding name Winnipeg-Centre or Winnipeg Centre? I did a first round of editing of the data (the CBC did a final round that also eliminated duplicate announcements) while Julie worked with students on their stories. Even so, there may still be errors we didn’t catch. One of the benefits of an online project, though, is when people find mistakes and tell us, we can fix them right away.

No surprise that it all took longer than I thought. I reviewed the last spreadsheet on Feb. 6, five days before the budget. There was no hope it would be done in time for the budget but better to be correct than rushed and wrong.

Layout, design challenges and standardizing the data entered on spreadsheets meant the project only went live on March 25. Jim Flaherty’s resignation as federal finance minister last week adds a timely element to the project as it charts spending announcements during his last full year as finance minister.

The finished project has more than 2,700 announcements but we know it’s not perfect as we couldn’t do all federal departments and agencies. It does, though, at least capture all the announcements on MP websites and the action plan site too.

The project gives Canadians a way to see how and where the federal government spends their money. The stories done by the class are just a start. We hope others will find innovative ways to use the data and information collected in other stories and projects and will credit us for the work we did.

Christopher Waddell holds the Carty Chair in Business and Financial Journalism at Carleton University. This project is the work of the business journalism class he teaches with Julie Ireton. He is also director of Carleton’s School of Journalism and Communication and publisher of J-source.

The Follow the Money project that our business journalism class pursued offers valuable lessons about the importance of planning and motivation in large collaborative projects.

When the project was first pitched to us, it was an exciting prospect. Working with the CBC was something that we could take pride in. Unfortunately, the realities of the work ahead soon led to misgivings among some in the class. It was clear that gathering the different press releases from individual MPs and government departments would take hours and hours of work. Were we, as a business journalism class, really suited for researching and compiling a database of this kind?

Part of the problem in motivating the class was that it wasn’t quite clear what we would get out of the data collection component of the project. The vision for the project seemed to be that other news organizations would benefit from the data we had collected and credit us for this. It wasn’t clear exactly what the CBC or other news organizations would do with the information.

We raised concerns about the project in class. The enormity of the project and the capacity for error were both alarming. The majority of the class wrote an email that outlined our misgivings. However, since we were already halfway through, the class decided we would continue. Motivation and morale among the class sunk as the project consumed our time.

Things got better when we used the information we had accrued about MP press releases to write articles for the CBC. This was a task we were more accustomed to, and here we could see how we had gained new and applicable knowledge from the project.

Being published by the CBC was definitely a great opportunity. I personally was able to write about the Conservative government’s recreational angling conservation program. It was an interesting subject and one that I’m glad I was able to look into.

The project was challenging in its scope and at many times a headache. That said, the class did learn valuable lessons about how the government releases information and how federal MPs champion certain spending announcements.

Cullen Bird is a fourth-year journalism and history student at Carleton University. His work has been published in Metro Ottawa, the Ottawa Citizen and the Burlington Post.

What I learned about the process of data journalism

It was a project we started enthusiastically. Between the thought of getting published by the CBC, the opportunity to do data journalism and the chance to get away from the standard curriculum, we jumped at the chance to work on the Follow the Money project.

The project has been online for just a few days, and already people are noticing a variety of shortfalls with our methodology. I’m not surprised. Months ago, we noticed these shortfalls too.

In January, we expressed our concerns to our professors, Chris Waddell and Julie Ireton, in an email, with 13 people out of our 20-student class agreeing that we wanted either to scrap the project or tackle a scaled-down version.

Here are some of the concerns we brought up:

We felt that we couldn’t create a thorough database by only looking at what was on the websites of MPs, many of which had little or no information. On the other hand, proactive disclosure announcements from departments often numbered in the hundreds. Simply inputting data from departmental press releases alone took some students more than 20 hours for a single department—a time commitment that, as fourth-year students, was daunting.

Furthermore, many funding announcements were addressed to organizations based in one place when the funding itself was actually going somewhere else—a problem that resulted in inaccurate mapping. We also questioned the timeliness of the project and the value of only looking at press releases.

Despite these concerns, we ultimately went ahead with the project. I and many other students found the entire process to be immensely frustrating.

That said, this was the first time the business journalism class had attempted anything like this, so it’s completely understandable that we ran into as many roadblocks as we did. Once we got to work on our actual stories, however, things got better. We reported on a variety of funding announcements from across the country and got a great sense of how the government spends its money. I learned a lot about P3 funding and procurement models for my story about the Edmonton transit expansion, while others covered everything from expensive Canada Day celebrations to the value of generic MP websites.

We learned a lot about how MPs communicate with their constituents (and the media), as well as the differences in how government and opposition members announce funding for their ridings. We learned how painstakingly slow the process of data collection can be without the help of pre-existing databases.

And perhaps most importantly, we discovered that while data journalism can reveal interesting stories, without the proper tools, time and focus, it’s extremely challenging to be thorough.

Erika Stark is a fourth-year journalism student at Carleton University who has previously worked for the Calgary Herald and the Ottawa Citizen.