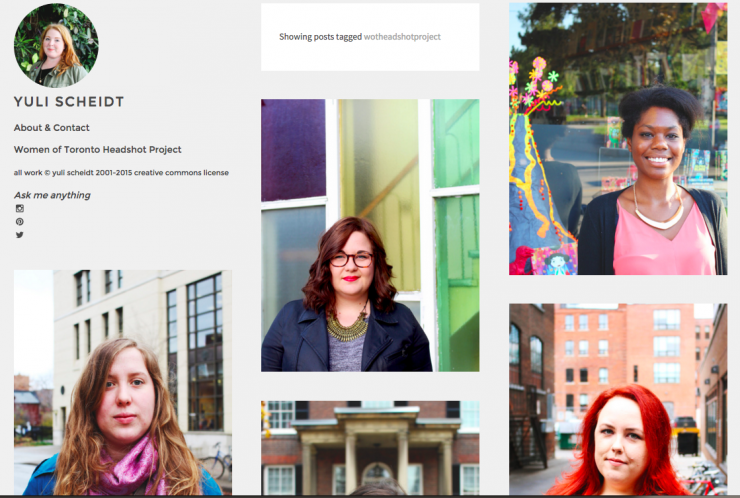 Freelance photographer Yuli Scheidt hopes she can help women and non-binary people with their professional images.

If you are a woman or non-binary individual in the Toronto area, Yuli Scheidt wants to take your headshot.

Scheidt, a product designer and freelance photographer, is taking free or pay-what-you-can headshots for the month of November to help people with their professional images. She particularly wanted to help people trying to enter professional careers, specifically in the sciences, technology, engineering and mathematics fields, though the project is also open to media workers.

“It’s really close to my heart as someone who went to school for design, because I see the difference between the number of women in the schools compared to the number in the actual workforce,” Scheidt said.

There is still a lack of female voices in the newsroom. According to a 2014 report by the Women’s Media Centre, a U.S. based non-profit organization, nearly 63 per cent of bylines and on-air appearances in American print, television and online mediums in 2013 were men.

Scheidt is also specifically hoping to provide headshots for women of colour and queer-identified people, who are under-represented in STEM and media fields. Professional headshots can cost anywhere from $75 to upwards of $300, which some people may not be able to afford.

Interest has been so high, Scheidt isn’t taking anymore bookings for November. But she’ll be starting again in the new year.

Lauren Strapagiel, a social news editor at BuzzFeed Canada, participated in the project.

“I don’t think headshots are too important. But it is true having one adds a polished look…and is a nice addition to the profiles of people looking to break in or for people who freelance,” Strapagiel said.

Strapagiel said that from her point of view, the journalism and media industry has typically excluded women of colour and non-binary individuals.

“Having something as simple as a professional headshot is a nice addition to the profiles of people looking to break in, or for people who freelance and don't have a company to take it for them,” Strapagiel said.

Journalism student Emily Joveski, who is also the news editor at CJRU FM, Ryerson’s campus radio station, also had her headshots taken with Scheidt because she said she recognizes the need for a professional headshot as a journalist.

“Even when you’re not working in a visual medium like television, I still know that editors and employers will look you up and want to know what you look like,” Joveski said.

Scheidt said this project has already gotten more requests than she had expected, but she said she wants this to be a positive experience for everyone involved.

“I feel very strongly that this [a headshot] shouldn’t hold someone back whether it’s for business or just for a personal reason,” Scheidt said.

She also said that people have told her that they like that she is working with people who are dealing with anxiety.

“I myself am an anxious person and I understand the struggles on being in front of the camera, even though I am behind it. But I want this to be a positive experience,” Scheidt said.